Battery set to open and close 2019 season at home 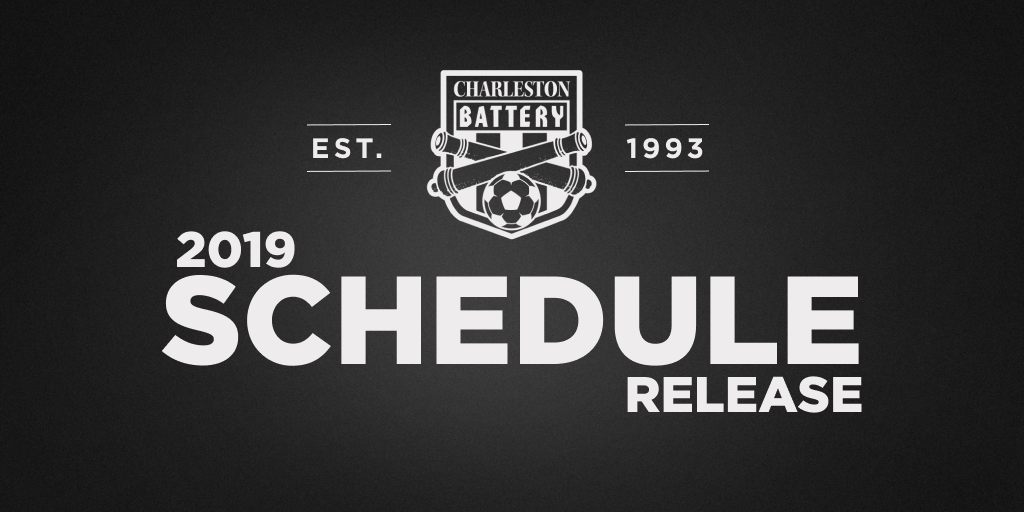 CHARLESTON, SC - With the release of the full USL Championship schedule Monday afternoon, the Charleston Battery learned its 34-game slate for the 2019 season. The Battery will open and close the season at MUSC Health Stadium with matches against Ottawa Fury FC on Saturday, March 9 and Bethlehem Steel FC on Saturday, October 19.

The Battery will revert back to 7:35 PM kickoff times for all Saturday night home games in 2019. In addition, Charleston will host three Sunday afternoon games at MUSC Health Stadium, including two Southern Derby matches. The Battery will welcome Charlotte Independence on Sunday, April 7 and North Carolina FC on Sunday, September 22.

The final Sunday afternoon match will be against expansion club Loudoun United FC on Sunday, October 13. In addition to Loudoun, the Battery will host five other new clubs at MUSC Health Stadium in 2019. Expansion clubs Hartford Athletic, Birmingham Legion FC, and Memphis 901 FC will visit Charleston on March 16, June 8, and July 13 respectively.

Saint Louis FC will return to Charleston on May 11 after playing in the Western Conference in 2018. Swope Park Rangers also moved over to the Eastern Conference for the 2019 season and will visit MUSC Health Stadium on June 22.

The Battery closes the season at home for the first time since 2015 against Bethlehem Steel FC. The USL Cup Playoffs begin the following week. The 2019 playoffs will expand to include 10 teams from each conference, with the lowest four seeds in each conference opening the postseason in the Play-In Round, provisionally slated for Wednesday, October 23

The single-elimination format will then continue for the following four weekends in a fixed-bracket format with the higher seed in each matchup serving as host through the Eastern and Western Conference Finals. The 2019 USL Cup will be held between November 14-18, 2019 and be hosted by the conference champion with the better regular-season record.

More information regarding promotions, theme nights, and local television broadcasts will be released in the coming weeks. Single-game tickets are on sale now at tickets.charlestonbattery.com. Special rates and in-game experiences are available for groups of 15 or more. For more information, call 843-971-GOAL.