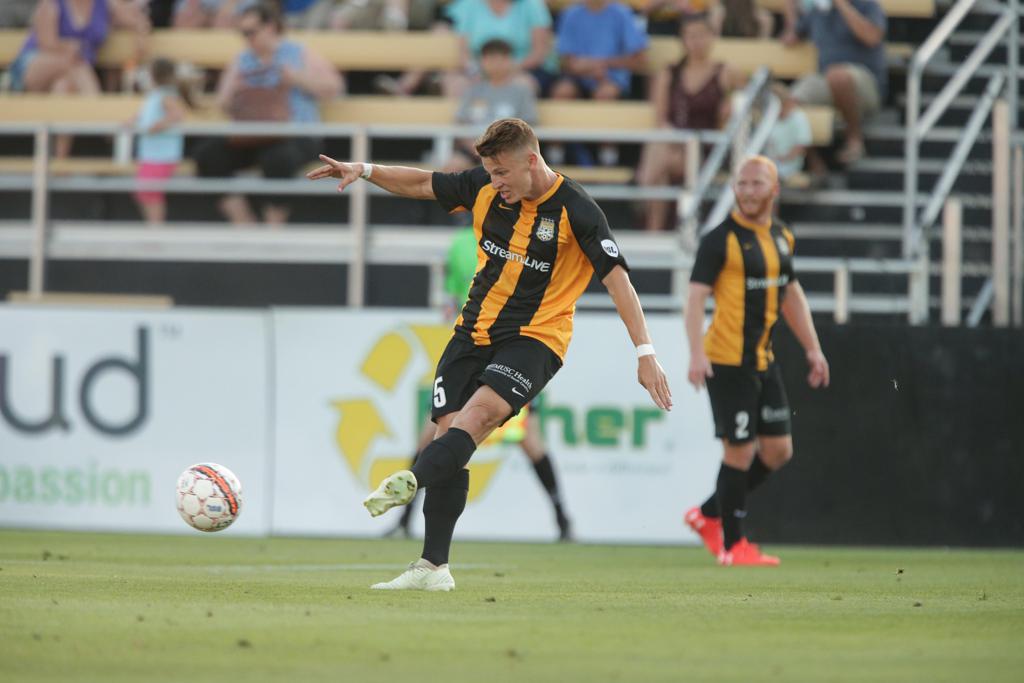 Ataulla Guerra and Gordon Wild connected for the second time in as many games to open the scoring just before halftime. The two exchanged passes at the top of the 18-yard box, which eventually sprung Wild free in behind the defense heading towards the endline. The rookie settled himself, cut the ball back, and found Guerra with a pass inside the 6-yard box for a tap-in, his third goal in three games and team-leading fifth.

Guerra and Wild were at the center of the Battery’s second goal as well, scored on the other side of the halftime break. This time, Guerra exchanged passes with Neveal Hackshaw on the left sideline, putting him through into space. Hackshaw picked his head up and found Wild with a cross at the back post. Wild smashed the serve on the full volley to double the advantage.

“Neveal played in a great cross,” said Wild describing the stunning goal. “I saw the ball coming and, full risk, I tried to smash it and luckily I hit it well.”

Following Wild’s goal, the Battery appeared to be in control, but a penalty in the 65th minute brought the visitors back into the game. The referee whistled for handball after the ball bounced around inside the 18-yard box. Derrick Jones converted the penalty, snapping Charleston’s 335-minute shutout run.

Bethlehem pressed hard in the final fifteen minutes, searching for an equalizer. The Battery defense, led by captain Taylor Mueller, stayed compact and organized and diverting several chances before they reached the attacking third.

Goalkeeper Joe Kuzminsky was forced to make a sliding save in the 93rd minute to preserve the 2-1 lead. Kuzminsky read the play well and got out quickly to block the shot and seal the team’s fourth victory in four games. The win extends the Battery’s unbeaten streak to six games.

“After their goal, they kept pressure on us,” said Battery Head Coach Mike Anhaeuser. “Sometimes you can crumble under that pressure or make a mistake because you’re frustrated. Our guys showed a lot of character and Joe made a great save at the end of the game, which is what you need in that situation. That’s a huge three points for us.”

Next up for the Battery is a second-round U.S. Open Cup match against South Georgia Tormenta at MUSC Health Stadium. The match is scheduled for 7:00 PM on Wednesday, May 16. Tickets cost $7 and are on sale now at charlestonbattery.com.