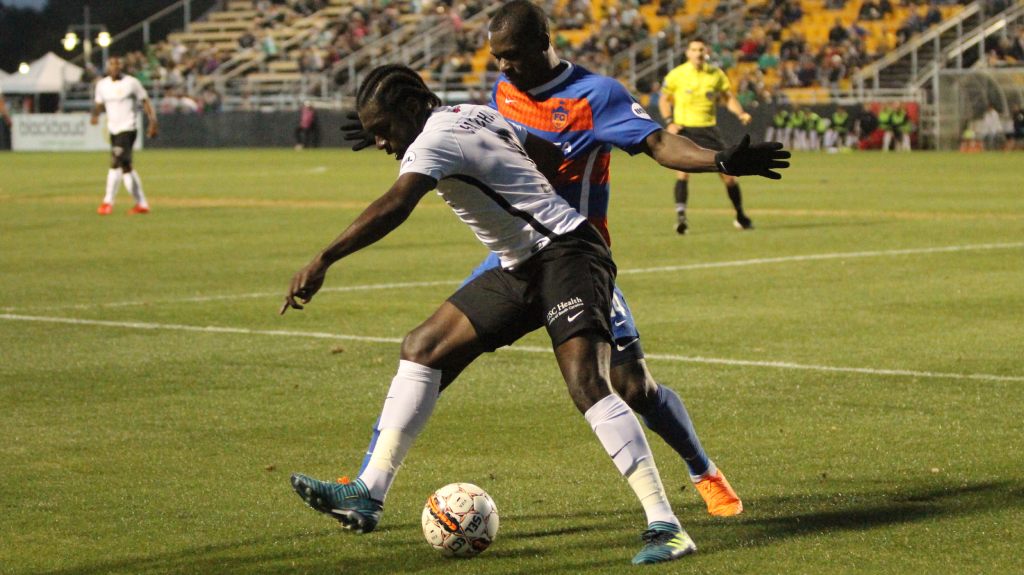 The Charleston Battery lost, 1-0, to FC Cincinnati in the opening match of the 2018 USL season at MUSC Health Stadium Saturday night.

The Battery were held scoreless in the opener despite outshooting the visitors 24-9. FC Cincinnati asserted themselves early, hitting the crossbar inside the first minute, but Charleston were the more dangerous side for the majority of the night.

FC Cincinnati scored the game’s only goal in the 18th minute. They connected a few passes at the top of Charleston’s box and slipped Emery Welshman through on goal. Odisnel Cooper did well to come out and save the initial shot, but the rebound fell kindly for Blake Smith who camly finished the eventual game-winner.

After falling behind, the Battery began to establish more of an attacking rhythm, putting FC Cincinnati under pressure.

“They got the early goal and obviously when that happens you have to adjust,” said Battery Head Coach Mike Anhaeuser. “I thought we were great in the last 15 or 20 minutes of the first half. We made some adjustments and got more aggressive with our wingbacks”

Charleston’s best chance of the first half came in the 39th minute when Quinton Griffith served a dangerous cross towards Kotaro Higashi at the penalty spot. Higashi hit the cross on the full volley, but goalkeeper Evan Newton made a diving, fingertip save to keep his side in front.

“I think maybe there were a few nerves for the first 10 or 15 minutes, but the final 20 or 25 minutes of the first half we kept the ball, moved it really well, and created a ton of chances,” said Battery captain Taylor Mueller. “Sometimes you have to have luck on your side and tonight it just didn’t seem like it was happening for us.”

Charleston continued to create quality scoring opportunities immediately after halftime and throughout the second half. Ian Svantesson appeared to score an equalizer in the 66th minute, but Newton was equal to the task again.

The chance came from a Cincinnati turnover in their defensive half. Mueller pounced on the loose ball and played Nico Rittmeyer through down the right side. Rittmeyer swung a cross in to the back post where Svantesson met it with his head. Newton made a point blank save, his third of the night, to preserve Cincinnati’s lead.

“We dominated the second half, we were all over them,” said Anhaeuser. “That’s the positive and we’re going to take that away from this match as we move into next week.”

The Battery’s next match is against Penn FC at MUSC Health Stadium next Saturday, March 24.  Tickets are available at tickets.charlestonbattery.com