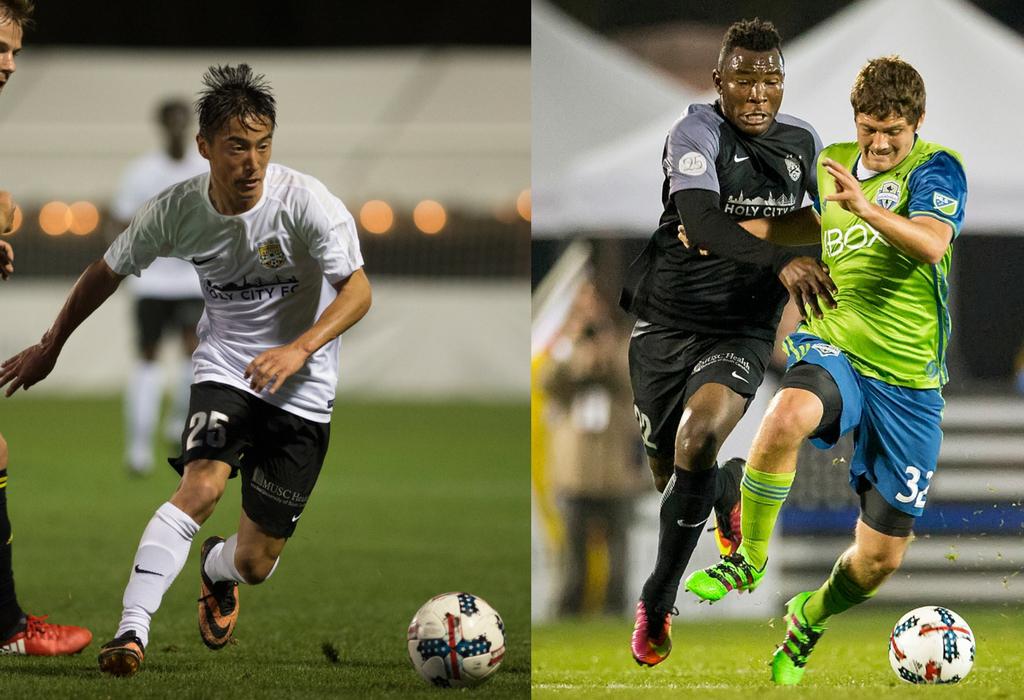 The midfield pair are two of only a handful of new faces on the Charleston Battery roster this season. Anunga and Higashi join Skylar Thomas as the only non-returning players currently under contract with the Battery.

Anunga grew up in Cameroon and played in APEJES Academy prior to moving to America in 2015. The midfielder appeared in nine games for Wilmington the year he moved to the U.S, then spent time with Carolina Dynamo of the PDL in 2016. Anunga has played for Cameroon’s national team at the U17, U20, and U23 levels, serving as captain of the U20s.

Battery head coach Mike Anhaeuser has used Anunga as a holding midfielder next to creative players like Justin Portillo and Ataulla Guerra in many of the team’s preseason matches. Anunga’s pace and athleticism allow him to cover a lot of ground and act as a safety valve  behind the team’s playmakers. The Cameroonian native has shown his versatility since arriving in Charleston, earning valuable minutes in the center of the park and as an outside back.

Higashi came to Charleston by way of Japan for Anhaeuser’s open tryouts in February. The creative midfielder earned a spot on the team’s Carolina Challenge Cup roster over the course of the two day open trial. Higashi scored a 92nd minute equalizer for the Battery against Seattle Sounders in the opening night of CCC and has consistently competed well in training and other preseason matches to earn a contract.

The Japanese playmaker is very comfortable on the ball and will bring another creative presence to the side. The goal Kotaro scored against the Sounders shows the attacking awareness he’s developed through years of playing at a high level all over the world. The 27 year old most recently spent time with the Bonnyrigg White Eagles of the National Premier Leagues NSW in Sydney Australia.

Anunga and Kotaro join an established midfield including  Portillo, Guerra, and Neveal Hackshaw. The 2017 roster is close to being finished; Coach Anhaeuser will likely only make a couple of additions prior to the USL opener on March 25th. Atlanta United is also expected to send more players to Charleston as the season draws closer.

The Battery closes out its preseason with a matinee match at home against the College of Charleston on Tuesday, March 21st at 1:30. The match is free and open to the public and will be streamed live on charlestonbattery.com.