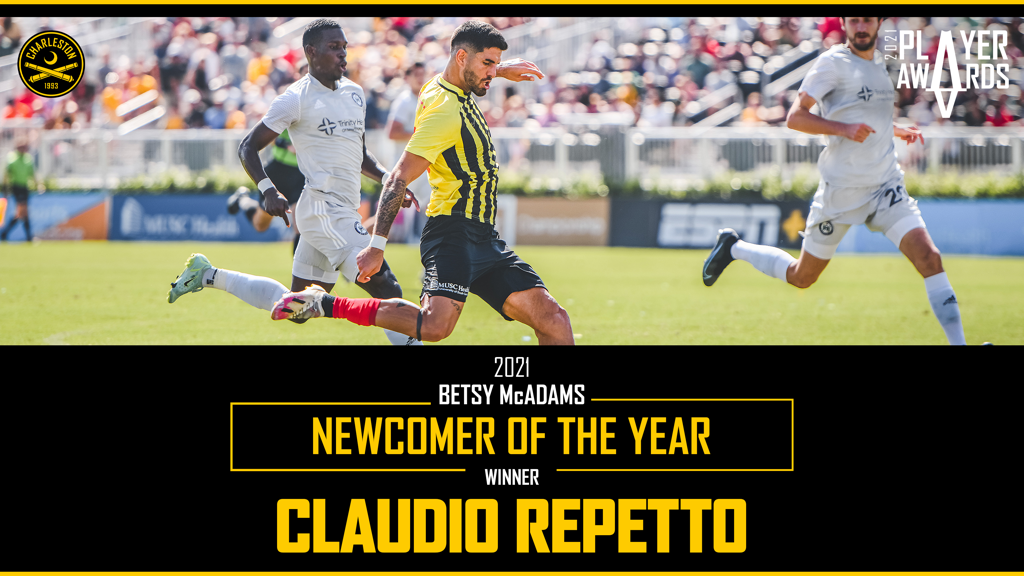 After a strong campaign in his first professional season, forward Claudio Repetto has been named the Battery’s 2021 Betsy McAdams Newcomer of the Year.

The 6-3 Italian striker joined the Black and Yellow in June following a standout tenure with the Coastal Carolina Chanticleers men’s soccer team. Repetto, a Genoa CFC Primavera product, proved to be a crucial injection of offensive production and an impeccable force in the Battery attack.

Repetto tallied team-highs with nine goals and 19 shots on target. His nine goals were the most in the regular season by a Battery player since Ataulla Guerra scored 15 in 2018. Repetto additionally registered three assists and 16 chances created across 24 appearances. Claudio’s scoring rate of 177.4 minutes per goal was second-best on the squad.

Repetto netted his first career pro goal on the road against New Mexico United on July 12, 2021, when he and his ex-Coastal Carolina teammate DZ Harmon combined for the score. Repetto and Harmon would connect again on the road against Loudoun United FC for a backheel goal by Repetto that landed him in the SportsCenter Top 10 the following day. That match featured Repetto’s first of two braces with the Battery, which helped lift Charleston to a 3-5 victory over Loudoun.

The Newcomer of the Year Award is named in honor of Betsy McAdams, former and longtime Battery COO who passed away in 2009 after a courageous battle against cancer. Watch below to see some of Claudio’s moments his first season with the Battery: