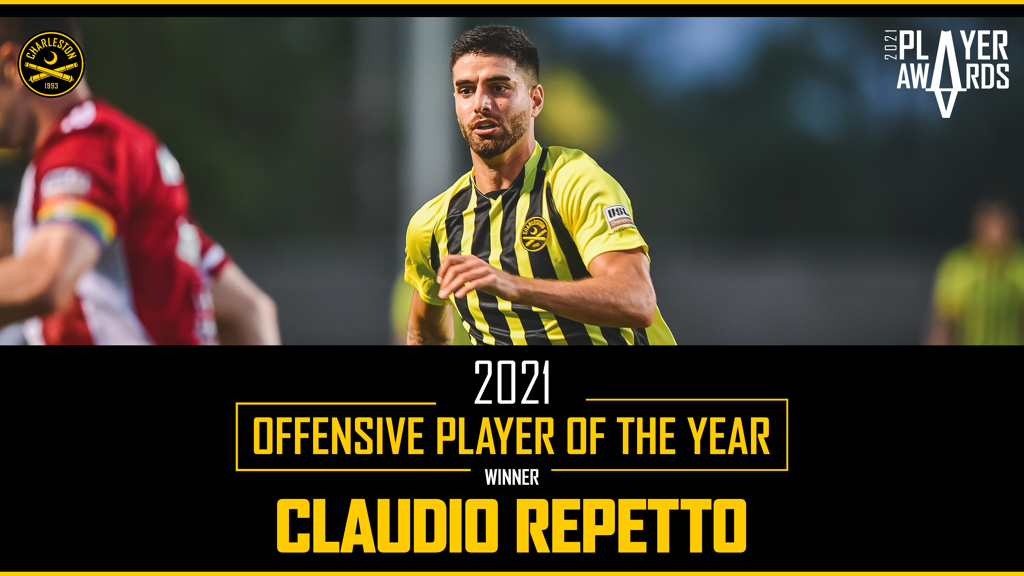 In his first season in the professional ranks, forward Claudio Repetto has been named the Battery’s 2021 Offensive Player of the Year.

The 6-3 Italian striker joined the Black and Yellow in June and became a constant force in the Battery attack. Repetto tallied team-highs with nine goals and 19 shots on target. He additionally registered three assists and 16 chances created across 24 appearances.

Repetto netted his first career professional goal on the road against New Mexico United on July 12, 2021, when he and his ex-Coastal Carolina teammate DZ Harmon combined for the score. Repetto and Harmon would connect again on the road against Loudoun United FC for a backheel goal by Repetto that landed him in the SportsCenter Top 10 the following day.

Among the top moments of Repetto’s stellar campaign came against Pittsburgh Riverhounds SC on September 26 in Pennsylvania. After the Battery initially went down 2-1 at halftime, Repetto notched a late brace in the second half, scoring in the 68th and 81st minutes to give the Battery the lead. The brace was the second of his season and allowed the Battery to salvage a point after Pittsburgh found a late goal of their own. The night displayed how dangerous Repetto can be inside the box; the first goal was a pinpoint header past the keeper and the second flashed his athleticism while falling down to tuck the ball just inside the left post with a firm strike.

Watch below to see Repetto’s highlights that earned him Offensive Player of the Year honors by the fans!