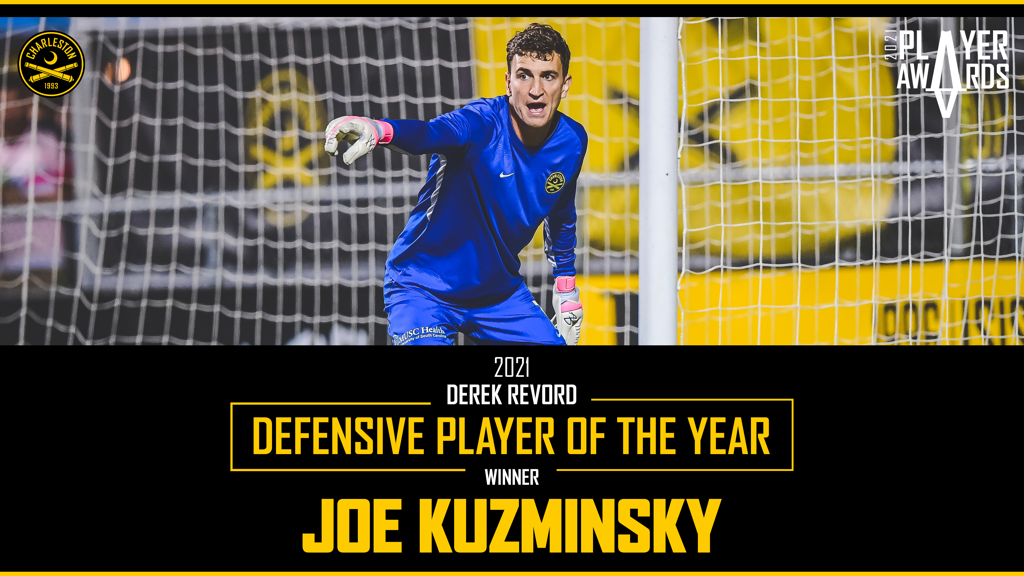 After another solid term between the sticks, goalkeeper Joe Kuzminsky has been named winner of the 2021 Derek Revord Defensive Player of the Year.

The honors cap Kuzminsky’s fifth season with the Black and Yellow, where the shot-stopper tallied 77 saves and four clean sheets across 27 appearances. The 77 saves slotted him for the 10th most in the league. Kuzminsky also made an appearance on the scoresheet when he registered an assist for Joel Bunting during the 2-0 shutout over Charlotte Independence on July 23.

Joe was a constant force for Charleston as he logged 2,430 minutes, second only to midfielder Angelo Kelly (2,532 minutes in 29 games). Among Kuzminsky’s top performances came during that July 23 blanking of Charlotte. Kuzminsky set the tone for the match in the 11th minute with a sensational penalty save to deny Charlotte an early opportunity to take the lead. With the late assist to Bunting, Kuzminsky became the first player in USL Championship history to record a penalty save, assist and clean sheet in a regular-season game.

The award isn’t the first of Kuzminsky’s year, either. This season, Joe additionally was named Player of the Week for Week 14, and racked up two Save of the Month honors (September and October) and four Save of the Week nods (Weeks 5, 14, 21, 25).