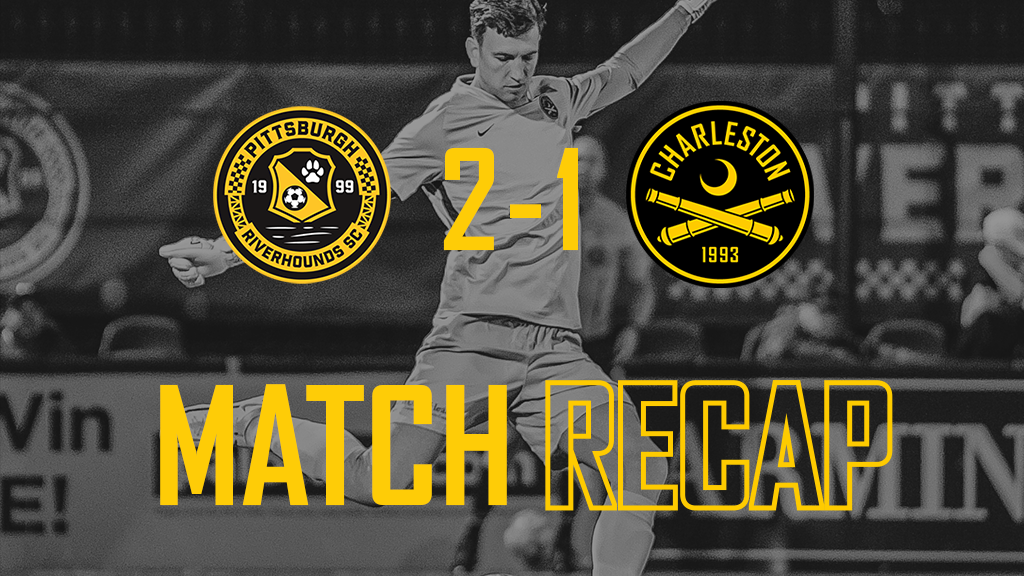 The Charleston Battery fell 2-1 to Pittsburgh Riverhounds SC on Saturday night at Highmark Stadium. Nicque Daley scored midway through the second half to level the score 1-1, but Pittsburgh’s Russell Cicerone goal in the 79th minute proved to make the difference. The match concludes the regular season series between the black-and-yellow clubs.

The final leg of the supporter-led Old Guard Shield saw the hosts open the match as the more aggressive side. The Battery were able to subdue their early advances with Pat Hogan making a smart clearance in the 6th minute to halt the Hounds. Pittsburgh’s Kenardo Forbes appeared to give his side a 1-0 lead when he found the back of the net in the 12th minute, but the offside flag had been raised. Goalkeeper Joe Kuzminsky rose to the occasion minutes later to make a fingertip save on a dangerous header by Jelani Peters. Pittsburgh continued to threaten in the 22nd minute, this time Angelo Kelly made the disruptive intervention on a sliding block to stop a shot on goal.

Pittsburgh managed to strike first in the 27th minute when Todd Wharton scored from close range after Kuzminsky was forced off his line. Charleston nearly responded moments later following a corner kick by Zeiko Lewis that bounced around the box and wasn’t able to be sent towards the net. Nicque Daley had a promising opportunity inside the box for a shot on goal, however goalkeeper Danny Vitiello made the save. Pittsburgh almost doubled their advantage towards the end of the half via a strong shot off the volley by Alex Dixon with Kuzminsky making an equally-strong save to deny the attempt.

Play resumed with the Battery pressing more in search of an equalizer. Robbie Crawford registered a shot that was blocked in the 50th minute while Charleston continued to work upfield despite Pittsburgh’s stringent defense. The Riverhounds had a dangerous look in the 55th minute when they were awarded a free kick outside the edge of the box. Thomas Williamson took the shot which went wide of the post, Kuzminsky got a hand on the ball to ensure it did not have a chance. Russell Cicerone had another good opportunity for the hosts minutes later inside the 18-yard box, however his shot skied over the net while his teammates unsuccessfully appealed for a penalty.

The Battery equalized in the 65th minute when Lewis found Daley, who then sent in a missile from outside the box to the bottom left corner of the net. The goal was Daley’s eighth of the season, the assist was Zeiko’s tenth. Aside from a few errant shots, both sides began to settle down following the equalizer as they surveyed the scene in search for a breakthrough. The Hounds regained the lead in the 79th minute when Cicerone connected on a left-footed shot inside the box to the bottom right corner. Charleston looked to respond with a wave of substitutions to add energy against the Hounds. The Battery pressed on to level the terms again, but each time Vitiello was able to make a stop. The final whistle blew that saw the hosts win a gritty, but yellow card free, match.

Battery Head Coach commended his team for bouncing back from the 1-0 deficit while recognizing Pittsburgh's similar resolve.

“It was another one of those games where we got behind and we did really well to get back in,” said Anhaeuser. “A nice goal by Nicque to get us level at 1-1 and I thought we were really playing well and handling the game. Then they just caught us, they got a simple ball in and played it across. We tried to throw everything forward, but defensively, [Pittsburgh] was very strong and solid.”

Adjustments for the second half allowed the Battery to open up more opportunities like Daley’s equalizer.

“I thought we really settled down at the end of the first half, made a couple little adjustments in the second half, and the guys did great to get back in the game,” said Anhaeuser. “I thought we took control even with them sitting in a little bit.”

“It’s always a good feeling helping the team, no matter if I’m the one scoring, assisting or defending,” said Lewis. “Whatever I can do to help the team, I will try to do that.”

The team will look to conclude their road trip strong when they travel to Connecticut.

“We had good moments that led to good attacking opportunities but we could’ve been better at other times, we have to refocus for the next game and push on,” said Lewis.

The Battery will stay on the road to close out their away schedule when they face Hartford Athletic on Tuesday, before returning to Patriots Point for the season finale against The Miami FC on Saturday, October 30.