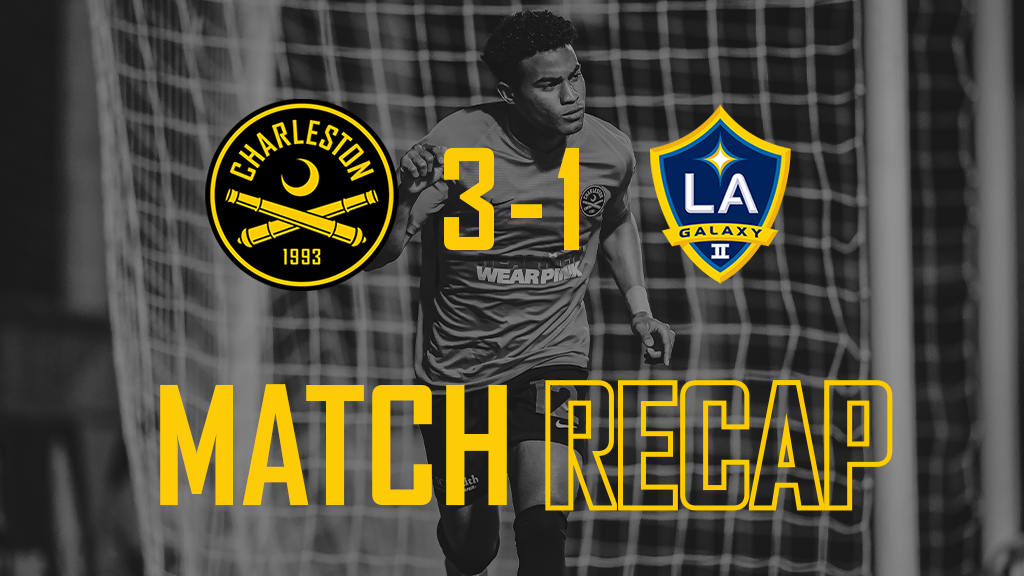 The Charleston Battery delivered an electric performance Wednesday night, defeating LA Galaxy II 3-1 at Patriots Point. In front of a ‘pinked out’ crowd for Breast Cancer Awareness Night, the Battery got out to an early lead off a Geobel Perez goal. Second-half goals by Romario Piggot and Zeiko Lewis and a strong performance by the Battery back line would put the game out of reach for the visitors in just the second meeting between the two sides.

It took Charleston less than two minutes to get on the board when Geobel Perez scored. Stavros Zarokostas carried a pass up the right side, breaking through the Galaxy II defense, to serve the ball to Perez for the finish on the far post. The goal was the Cuban’s second of his rookie campaign. The Battery continued to threaten following the initial goal with Zarokostas, DZ Harmon and Josh Penn leading to forward movement.

The visitors looked to respond in the 23rd minute when Jorge Hernandez and Daniel Aguirre combined for an attempt that only yielded an easy save by goalkeeper Joe Kuzminsky. Much of the half would cool off following the run as the sides continued to size each other up. Galaxy II looked to turn up the pressure in the waning minutes when they were awarded a pair of free kicks just outside the 18-yard box. Both opportunities looked promising, however the visitors were unable to capitalize on the chances. Angelo Kelly and Patrick Hogan registered shots of their own just before the halftime whistle blew.

As play resumed for the second half, it was clear Los Angeles were looking for an equalizer, firing four shots in the opening eight minutes. None of the four, however, found the back of Kuzminsky’s net. Harmon and Perez nearly doubled the Battery’s lead in the 57th minute on a dangerous, but unsuccessful, run inside the box that nearly led to a Galaxy II own goal. Los Angeles countered quickly and were in an equally-dangerous position inside the Battery’s defensive third until Jarad van Schaik raced in for a clinical slide tackle that ended all threats. The visitors eventually broke through Charleston’s defense in the 71st minute when Aguirre leveled the teams.

The Battery were undeterred and regained the lead just a minute later when Romario Piggott headed home his fourth goal of the season, assisted by a stellar cross from Temi Adesodun. The intensity continued from there as the two teams traded movements in each other’s defensive halves. Among the most dramatic sequences came in the 79th minute when Logan Gdula put on a masterclass performance on the goalline by making a double save. Kuzminsky was up in the box, leaving Gdula to man the line, as Jonathan Perez and Preston Judd took shots that Logan stopped while preserving the Battery’s lead. Charleston put the game away in the 89th minute when Joel Bunting and Zeiko Lewis combined for the late goal, securing the three points for the Black and Yellow.

Battery Head Coach Michael Anhaeuser was pleased with his squad’s strong execution of the game plan.

“We wanted to bring DZ Harmon and Stavros Zarokostas in to bring a little energy, and then Josh Penn and Geobel Perez, just wanted to get some fresh guys in there,” said Anhaeuser. “We got down there, got the ball across the back post to Geobel for a great goal. That really helped us out. [LA Galaxy II] are a very technical team, so putting them behind was a big start for us.”

The amped up audience on hand for Breast Cancer Awareness Night played a role in helping the Battery secure the three points.

“It’s electric, what a great crowd for pink night,” said Anhaeuser. “To get three goals for these fans, and now trying to get a third win in a row at home [on October 30]. The jerseys supporting breast cancer awareness, they’re beautiful, and the guys were fantastic getting behind the cause and also putting on a good show at home for the fans.”

“There was definitely a lot of energy tonight, and it was something special seeing everyone wear pink and be united,” said Zarokostas. “They really are a 12th man and helped us a lot. I really felt the energy and you could see it really help the team pull through.

Zarokostas said an emphasis on applying pressure helped the team get off to a strong start.

“I wanted to be aggressive out there on the attack, but tried not to get a yellow, in the end I succeeded,” said Zarokostas. “I really just tried to stay focused in the game and be aggressive when I needed to be. I think the team did the same thing and you can see that from the result.”

The victory is the first of the final four matches for the Battery this season as the team looks to conclude the campaign strong.

“We have one more home game to get a win, but we have two more [on the road] before that,” said Anhaeuser. “We’ll get ready for a quick turnaround Saturday night against a very good Pittsburgh team.”

The Battery hit the road for two away matches across the next six days to face Pittsburgh Riverhounds SC and Hartford Athletic before returning home to take on The Miami FC on October 30 for the season finale.