Battery Struggle in 5-1 Defeat at Charlotte 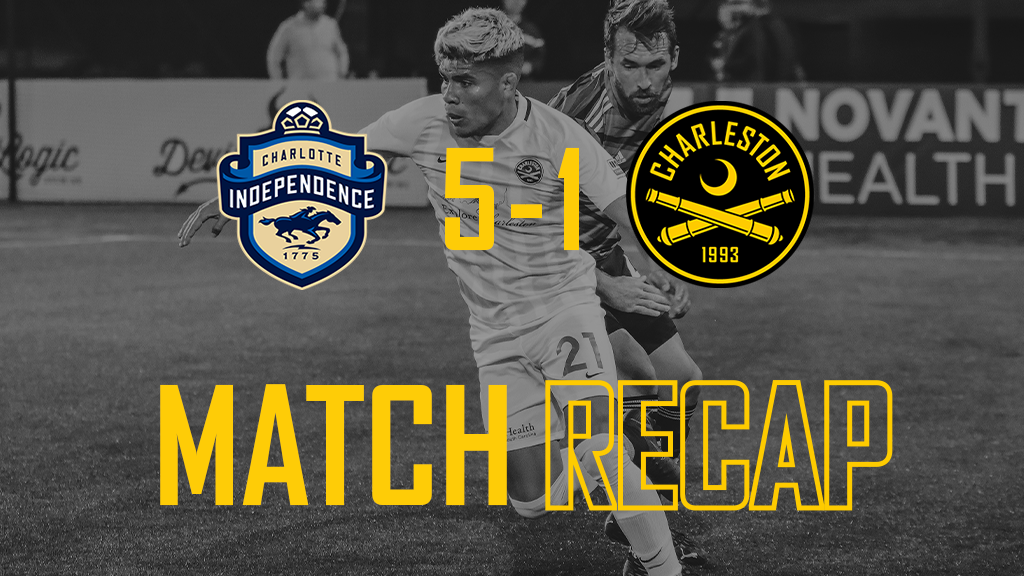 The Charleston Battery fell 5-1 to Charlotte Independence on Saturday at American Legion Memorial Stadium, effectively ending the Battery’s playoff hopes. Romario Piggott got on the scoresheet for the Black and Yellow just before the end of the first half, but goals from Sylvain Marveaux, Dane Kelly, Gabriel Obertan, Enzo Martinez proved too much to overcome. Charleston return home Wednesday for an East Coast-West Coast showdown against LA Galaxy II on October 20 as the club “Pinks Out” Patriots Point for Breast Cancer Awareness Night in support of the American Cancer Society and Real Men Wear Pink.

The Battery took the field at American Legion Memorial Stadium for the first time since the venue’s recent renovations were completed. Battery goalkeeper Paul Lewis deputized for Joe Kuzminsky and would be tested early, breaking up a cross with a diving effort in the 6th minute. Charlotte struck first in the 12th minute when Sylvain Marveaux found the back of the net, despite Lewis getting a hand on the ball. Lewis made another strong diving effort in the 19th minute with a save to deny Enzo Martinez.

The Independence added to their lead when Dane Kelly headed the ball into the back of the net after a corner kick in the 24th minute. Zeiko Lewis registered Charleston’s first shot just before the half-hour mark, however the attempt was too tall for the net. The Battery looked to pick up the pace as the half progressed while trying to eat into Charlotte’s lead. Charleston did just that during stoppage time when Romario Piggott scored following a set piece situation. Zeiko sent in the free kick from roughly 40 yards out which then went off the heads of Leland Archer and Claudio Repetto before finding Piggott for the goal. The assist was Repetto’s third in as many games to set up Piggott’s third goal of the season.

Play resumed in the second half with Charleston eager to equalize as Nicque Daley sent in a shot in the 46th minute that was ultimately blocked. Zeiko sent in a header minutes later that forced a save from goalkeeper Austin Pack. The 2-1 score held until the hour mark when Angelo Kelly was called for a foul in the box against Jake Areman, rewarding Charlotte a penalty kick that was converted by Martinez. Dane Kelly looked to add another goal shortly after the penalty conversion, but Paul Lewis was there for the save.

The Battery’s substitutions signaled an emphasis on offensive movement as the Black and Yellow attempted to apply pressure and get back into the game. Newly-subbed Geobel Perez fired a shot in the 75th minute from outside the box that was just wide of the post. The Independence added to their lead from the penalty spot again. The penalty followed a foul on Paul Lewis who charged out to make a save, but missed the ball making contact with an advancing Marveaux; Dane Kelly converted from the spot for Charlotte’s fourth goal. The Battery aimed to battle back again with decent movement inside Charlotte’s defensive third. Josh Penn and Angelo Kelly would register shots, but neither player could convert. The Independence scored their fifth in the 89th minute when Gabriel Obertan found the back of the net from the center of the box. Perez would send in another promising shot in the 92nd minute that required a save from Pack.

“We’ve been in this situation before, but the guys picked up the goal at the end of the first half,” said Anhaeuser. “I thought the guys battled and we could come back, but Charlotte seems to catch us on the counter. We tried to open it up, the guys did a great job towards the second half.

With the postseason no longer in play for the Battery, Anhaeuser said the team’s focus will shift to finishing the season out strong, starting on Wednesday.

“We know where we are now, we want to make sure that we go out in the last four games and perform, especially for our last two home games,” said Anhaeuser.

Battery goalkeeper Paul Lewis said the team knows they have one thing left to play for: pride.

“No matter where we sit in the standings, no matter what our playoff chances are, we represent Charleston and we’re proud to do it,” said Lewis. “We play for experience, we play for pride. We still have pride on the line, so we’re going to keep going out and make sure we finish the season out strong.

“We want to make sure that we play out there to the best of our abilities every time we can with these games left.”

Anhaeuser believes his team will be able to bounce back Wednesday night when the club returns to Patriots Point.

“We have a big game on Wednesday and a big crowd, so we want to come out and make sure we showcase what we can do because I don't think tonight’s performance was indicative of what we can do,” said Anhaeuser.

The Battery will return to the Lowcountry this week to take on LA Galaxy II on Wednesday, October 20, for Breast Cancer Awareness Night at Patriots Point.