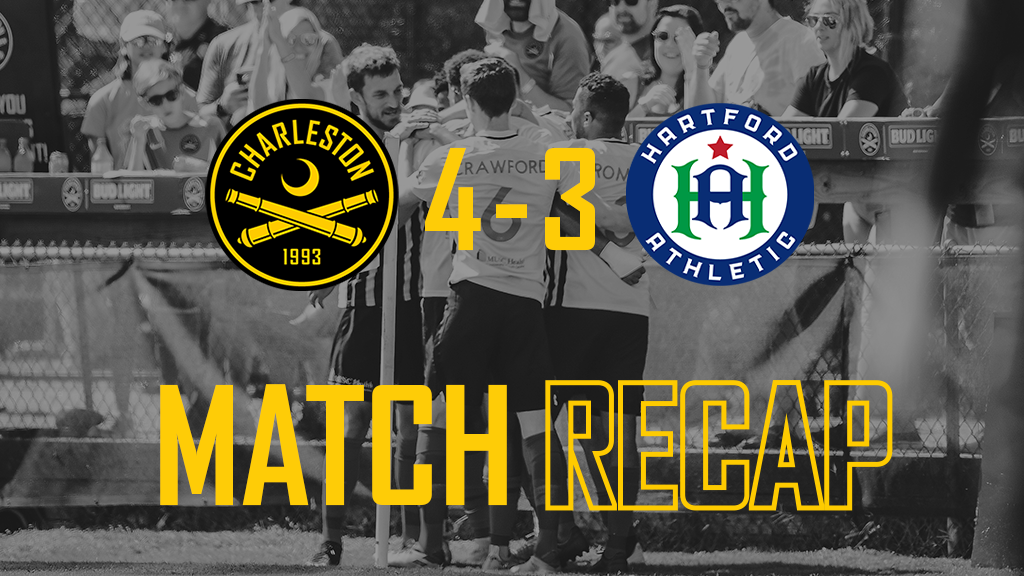 The Charleston Battery got back in the win column Sunday against Hartford Athletic in front of a record crowd at Patriots Point. The Battery found the back of the net three times with an added own-goal committed by Hartford to secure three points in the 4-3 victory. Nicque Daley registered his second brace of the season. The Athletic made a late comeback attempt with two late goals, but the Battery held off the visitors enough to secure the victory.

Before the teams had even kicked off, anticipation for this match was high as the winner would keep their playoff hopes alive and the loser would be eliminated. The scoring opened in the 2nd minute when pressure from the Battery forced a Hartford own goal that saw the hosts take an early 1-0 advantage. It was the second time in as many games the Battery’s press forced an own goal. Charleston doubled their lead just moments later when Nicque Daley found the back of the net in the 10th minute. Daley made a skillful move on a pass from Romario Piggott to turn and send the ball past everyone.

The Battery appeared eager to get after the Hartford defense and seize on the momentum of their strong start. Claudio Repetto nearly added his name to the scoresheet in the 16th minute when he was on the receiving end of a Piggott through ball for a shot on target that was saved by goalkeeper Matt Lampson. Hartford began to create momentum of their own by testing goalkeeper Joe Kuzminsky, who made a diving save on a shot from Preston Tabort Etaka moments later. After plenty of back-and-forth movement from both sides, the Battery broke through again in the 43rd minute when Daley sent a Repetto pass into the net for his seventh goal of the season. Hartford got one back in stoppage time when Piggott was credited with an own goal to make the score 3-1 heading into the break.

The second half opened with much of the same intensity from the first 45 minutes. Hartford looked to regain ground when Derek Dodson fired a shot that required another Kuzminsky save, AJ Paterson ultimately cleared the ball from the goal line to complete the denial. A decisive moment came in the 58th minute when Hartford captain Danny Barrera was shown his second yellow card of the afternoon and was sent off. Charleston did not hesitate to seize on the one-man advantage as Burke Fahling fired home Charleston’s fourth goal. The shot came from roughly 30 yards out and snuck past Lampson’s dive at the near post following a bounce.

The Battery worked to hold the 4-1 advantage as the second half progressed. Hartford, however, continued to fight for their playoff hopes. Juan Carlos Obregon helped sustain those ambitions with a goal from inside the box in the 81st minute. Hartford continued to press on and found a third goal in the 88th minute via Kecan Hot. With a one-goal advantage, the Battery looked to add some insurance and thwart Hartford’s comeback attempts. Josh Penn came close to putting the game away in stoppage time with a strong shot from the right side of the box, but the attempt was too tall and rocked off the crossbar. The Battery held on to secure the victory while keeping their playoff hopes alive.

Following the match, Battery Head Coach Michael Anhaeuser said he was happy to see his team achieve another victory.

“It’s great to be in the win column, three points at home with a great crowd, it was fantastic,” said Anhaeuser. “We made it difficult though, letting them back in there with 10 guys. You have to give [Hartford] credit, but hanging on and getting three points, that’s huge for us and you never know what can happen from here.”

Coach Anhaeuser cited the team’s early press that helped force the own goal and helped them build an early lead.

“We were able to put pressure [on Hartford], we wanted to bring out the pressure right away,” said Anhaeuser. “The guys got the pressure and forced [Hartford] to make that bad pass that started us off.”

Battery forward Nicque Daley was happy to play his role in coming away with the three points at home.

“It’s a great feeling for the team,” said Daley. “To get back on the scoresheet with a brace, it’s a great feeling, being able to move on and off the ball. The second goal, to get it in from the back, it’s what we worked on in training and to execute during a match was great.”

Daley said the squad will look to build on the victory, treating every match with the same high intensity.

“For the team, every game now is like a final,” said Daley. “The teams above us, we’ll need to put pressure on them and show them we want to be there.”

The Battery will shift their focus to their next game, a road duel against Charlotte Independence in another crucial meeting.

“You’ve got to get the first one, anytime it’s just like a new season, that’s what we tried to say,” said Anhaeuser. “We wanted to play it like it was our first game. We got the win, no matter how it happened, it’s three points. If we can go and win five more times, it’s an opportunity for these guys and we’ll have to go after every point.”

Charleston will have a week of preparation ahead of facing Charlotte Independence on Saturday, October 16. The Battery meet the Independence at the newly-renovated American Legion Memorial Stadium in what is also the season finale of the Southern Derby.