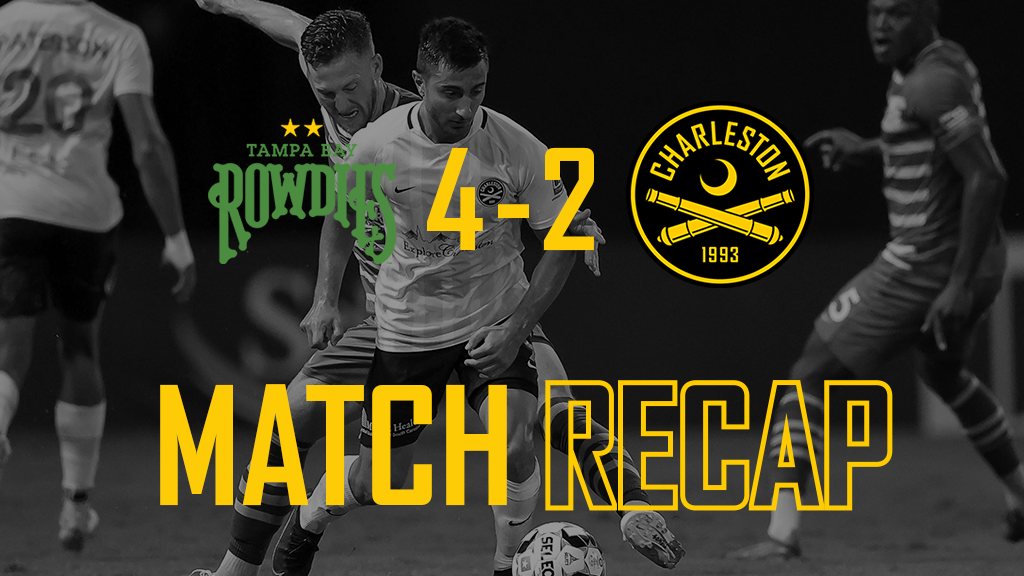 The Charleston Battery saw their efforts fall short Thursday night in a 4-2 defeat against the Tampa Bay Rowdies at Al Lang Stadium. An own goal and late-game goal from Joel Bunting got Charleston on the scoresheet. Goals from Tampa Bay’s Sebastian Guenzatti, Leo Fernandes and Steevan Dos Santos, however, secured the three points for the hosts. The Battery will look to bounce back Sunday when they return to Patriots Point on October 10.

The half kicked off with both sides eager to claim an early advantage through the first 15 minutes. Zeiko Lewis provided the most promising look during that time following a free kick won just outside Tampa Bay’s 18-yard box. Lewis sent in a well-placed shot to the far post that forced Rowdies goalkeeper Evan Louro to make a diving save. Tampa Bay’s Sebastian Dalgaard fired a shot in the 17th minute from the left side of the box which Ben Di Rosa made a strong block to deny the attempt. Battery goalkeeper Joe Kuzminsky made his first save of the night in the 22nd minute with a strong effort that kept the game scoreless.

The Rowdies struck first in the 27th minute when Sebastian Guenzatti managed to break through the Battery defense with a header to the top right corner. Tampa Bay doubled their lead when Guenzatti found the back of the net again in the 34th minute with a shot inside the box. The Battery got one back just two minutes later via an own goal that was conceded by Jordan Scarlett. Stavros Zarokostas applied the pressure, forcing Scarlett to make a pass back to Louro, but the ball went wide of the goalkeeper and snuck into the net. The moment marked the first own goal for the Battery this season. Kuzminsky would add another save in the 41st minute before the half ended with Tampa Bay leading 2-1.

Both sides returned to action looking to add to the scoreline, forcing both goalkeepers to make saves within the first 10 minutes of the second half. The Rowdies succeeded in the 57th minute when Leo Fernandes scored from the center of the box, assisted by Guenzatti. The Battery very nearly scored again in the 66th minute when AJ Paterson sent a header towards the goal off a corner kick. Paterson’s attempt bounced towards the goal line but was ultimately blocked before it could completely cross the line. Claudio Repetto came close in the 70th minute with a solid header off a DZ Harmon cross which required a lunging save by Louro to keep the ball out of the net.

Charleston continued to harass the Tampa Bay defense as the half grew on, however, the hosts were unyielding in giving any ground. Nicque Daley and Repetto were among the two providing the most advances from up top. Newly-subbed Joel Bunting found the Battery’s second goal of the night in stoppage time, assisted by Repetto. The play was made by Repetto’s smart pass to Bunting instead of a shot and Bunting did not hesitate to score his fourth goal of the season. Tampa Bay scored again moments later to restore their two-goal lead. Despite the result, Kuzminsky turned in an admirable performance in goal, tallying eight saves, his most in a game this season. Zeiko Lewis ended the day with six key passes, tied for most in the match with Fernandes.

“Tonight was a tough one,” said Anhaeuser. “We went down, but they let us back in the game with the own goal and I thought we started doing some good things. If we could have got that second goal in the beginning of the second half when we started well, we would have had a better chance.”

Coach Anhaeuser applauded his team for the character shown in the face of adversity following the early deficit.

“These guys don't quit, we were down 3-2 and we almost nicked the ball there, the guys kept pushing,” said Anhaeuser. “We just talked about that and we're going to make sure we have that same fighting mentality when we get back home for Sunday's game.”

Battery forward Zeiko Lewis said the team will look to make adjustments and build on the positives following the game.

“It’s a hard fought game, not everything goes the way that we want it to, but many positives that we can take from it,” said Lewis. “We need to clean up our mistakes and not make so many, but we’ll grow and learn from our pains to bounce back stronger.”

The team will look to flip the page on this result and bounce back against Hartford Athletic this Sunday when the Connecticut club visits Patriots Point for a day game.

“We’ve got another short turnaround [between games], so the biggest thing is we have to see where we are fitness-wise,” said Anhaeuser. “Fortunately, we have a couple of guys who will be available on Sunday, we'll have to really focus and get ready to go on Sunday despite the timeline.”

The Battery’s fight for the playoffs continues Sunday, October 10, at Patriots Point when the team hosts Hartford Athletic for a 2 p.m. EST kickoff.