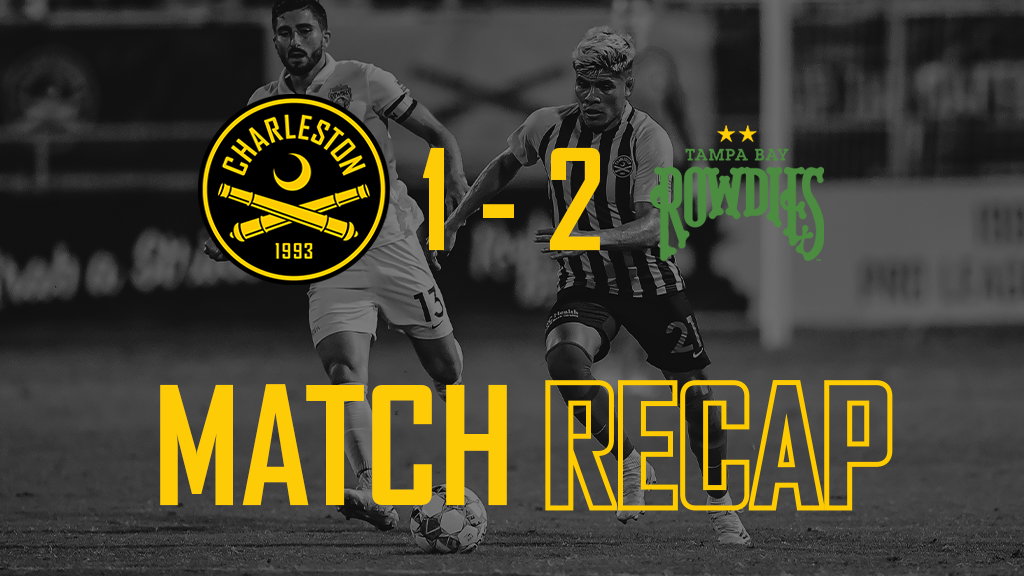 The Charleston Battery could not climb back after conceding two quick first-half goals to the Tampa Bay Rowdies, losing 1-2 to their division rivals Saturday night at Patriots Point. Claudio Repetto scored his ninth goal of the season in front of a packed home crowd for Military Appreciation Night. For the second consecutive match, the Battery applied heavy pressure late in the second half, but were unable to find an equalizer this time as the Rowdies secured their eighth-straight victory.

In what was expected to be in an intense match between the rival clubs, the first start of the match was no exception. Claudio Repetto won an early free kick in Tampa Bay’s defensive third in the 7th minute, which prompted a Battery free kick. AJ Paterson received the free kick and fired a shot inside the 18 yard box that drew a hand ball from Jordan Scarlett, awarding a penalty to the Battery and a yellow card to Scarlett. Repetto was called upon for the penalty kick and made no mistake, driving the ball into the bottom left corner, opposite goalkeeper Evan Louro’s guess.

Tampa Bay were quick to respond with a handful of shots within the following 10 minutes of play. Lawrence Wyke scored for the visitors from close range to level the score 1-1 in the 21st minute. The Rowdies would find the scoresheet again in the 25th minute when Sebastian Guenzatti converted from the penalty spot after a foul inside the box by Leland Archer. The Battery, too, looked to level and began to press more as the half progressed. Repetto had most of the opportunities as Charleston looked to build out of the back via AJ Paterson and Erik McCue, however the hosts were unable to equalize before the half concluded. Possession was almost evenly split, Tampa Bay narrowly retained the ball for the majority of the first 45 minutes at 50.7%.

Charleston opened the second half pushing for an equalizer with Stavros Zarokostas firing a shot from the left flank to the near post that was saved by Louro. Tampa Bay looked to add a third goal in the 55th minute when Wyke went for his second of the night. Goalkeeper Joe Kuzminsky had other ideas, however, making a smart kick save to deny Wyke and maintain the 1-2 score. Much of the second half cooled off through the 70th minute as both sides were uneager to give ground either way.

The Battery increased pressure as substitutions came on, winning a corner in the 71st minute. Leland Archer got his head on the ball in an attempt at his third goal in as many games, but the defender’s shot was just wide of the post. Robbie Crawford registered another shot minutes later from the center of the box that was ultimately too tall for the crossbar. Tampa Bay’s Jordan Adebayo-Smith had a breakaway opportunity in the 74th minute with a promising look on goal, until Jarad van Schaik caught up to Adebayo-Smith and dismantled play with a smart tackle at the edge of the box. The Rowdies would not register another shot for the rest of the evening. Charleston continued to press forward in search of an equalizer before the final whistle blew with Zeiko Lewis and Crawford leading much of the offense. The Battery, however, were unable to come up with a late-game equalizer following five minutes of stoppage time.

Battery Head Coach Michael Anhaeuser rendered his verdict on the night, crediting his team’s energetic start and Tampa Bay’s defensive performance in the later stages of the match.

“We got off to a good start, we got the ball in the box and got a penalty kick to go up 1-0, that was really something we talked about, get out to that early lead,” said Anhaeuser. “We were pressing and doing everything, but [Tampa Bay] defended so well, they’re so tough to break down. You’ve got to give them credit for the way they defended tonight.”

Coach Anhaeuser applauded the fight from his players despite the 1-2 deficit.

“We were coming down the road, attacking our good end,” said Anhaeuser. “Unfortunately, we couldn’t get that second one, because I think if we got the second one, the crowd really gets behind us, and then we could probably get a third one, but it didn’t happen tonight.”

Midfielder Angelo Kelly said the team will turn the page on the result and look ahead to the next match this Thursday, against the Rowdies again.

“We’ll look forward to the next one, move past this one, rest and get back to work,” said Kelly. “We’ve got a big turnaround against them away, so it’s going to be big rematch.”

The team will have time in the following week to train and regroup prior to heading south to Florida.

“We’ll take a few days of practice and then hopefully, when we travel down there, we get the job done and bounce back on to a winning streak to end the season,” said Kelly.

The Battery will head to St. Petersburg to meet the Rowdies again on Thursday, October 7 at 8 p.m. EST. The duel at Al Lang Stadium will be the series finale for the regular season between the two sides.