Leland Archer Named to USL Team of the Week – Week 23 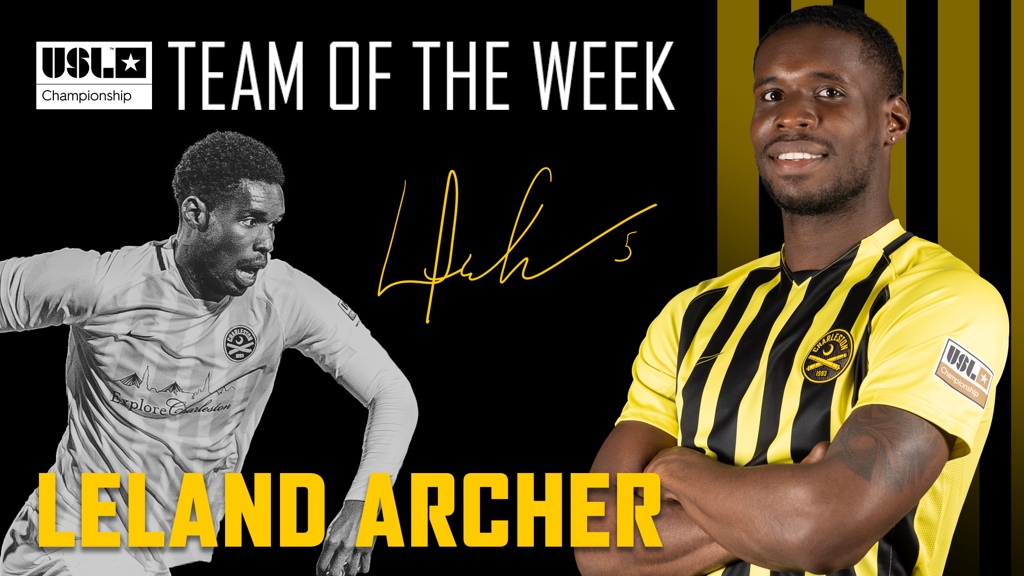 TAMPA, Fla. – The USL Championship announced the Team of the Week Presented by Cleer Audio for Week 23 of the 2021 regular season on Tuesday, with Birmingham Legion FC forward Neco Brett being voted Player of the Week after recording three goals and one assist across a pair of victories that sent Legion FC within a point of Louisville City FC for the lead in the Central Division.

Now in his second season with Legion FC, Brett moved to 15 goals overall this season as he first notched two goals and an assist in the side’s 4-0 victory against Atlanta United 2 on Wednesday evening, and then backed that up with another goal to start Legion FC’s comeback for a 2-1 win against the Charlotte Independence on Sunday at BBVA Field. The Jamaican forward has now recorded 59 goals for his career in the Championship, ranking eighth all-time after moving past both Louisville City FC’s George Davis IV and Sacramento Republic FC’s Cameron Iwasa in the league rankings.

Brett earned 92 percent of the ballot to claim the award. Miami FC’s Ariel Martinez earned eight percent after recording one goal and two assists in his side’s 6-1 victory against Loudoun United FC on Saturday night at FIU Stadium.

The Championship’s Player of the Week is selected by the USL National Media Panel, which is made up of representatives from each media market in the Championship.

D – Jonathan Gomez, Louisville City FC: The 18-year-old notched an assist and three key passes while completing 42 of 51 passes overall and defensively made 13 recoveries in LouCity’s 1-1 draw at Memphis 901 FC.

M – Leo Fernandes, Tampa Bay Rowdies: Leo Fernandes provided the assists on both of the Rowdies’ goals in a 2-1 victory against Hartford Athletic and ended the night with two shots and four key passes overall while winning 15 of 21 duels and 10 of 13 aerial duels defensively.

M – Diego Luna, El Paso Locomotive FC: The 18-year-old continued his stellar season with one goal on two shots and three key passes in El Paso’s 2-2 draw with Austin Bold FC while completing 36 of 41 passes overall and winning 9 of 15 duels.

F – Neco Brett, Birmingham Legion FC: The Jamaican forward recorded three goals and one assist across a pair of Legion FC victories against Atlanta United 2 and the Charlotte Independence while recording eight shots overall and completing 22 of 30 passes.

F – Ariel Martinez, Miami FC: The Cuban forward had one goal and two assists while recording five key passes and completing 3 of 4 dribbles and 23 of 27 passes overall in Miami’s 6-1 victory against Loudoun United FC.