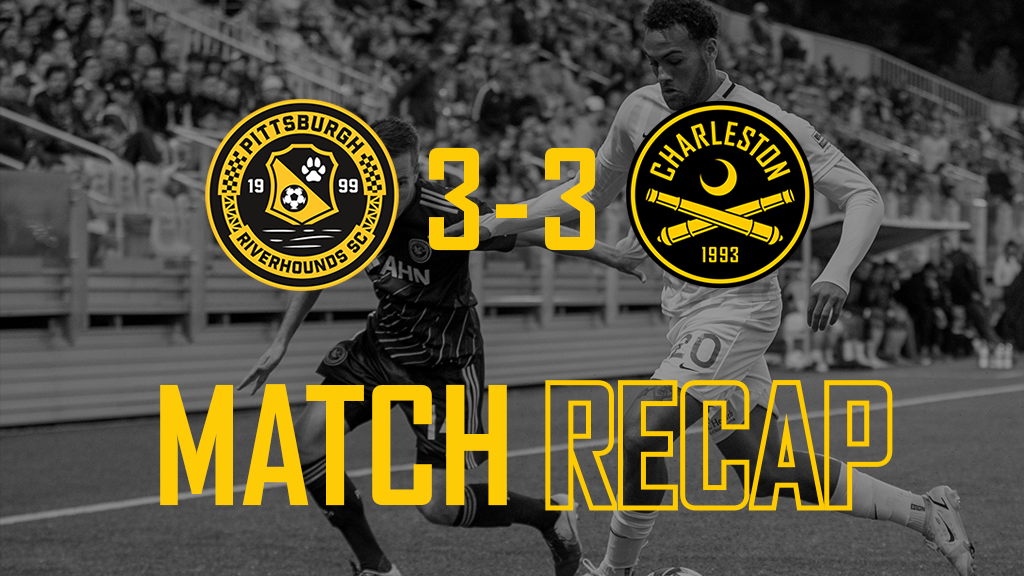 The Charleston Battery overcame an early two-goal deficit on the road Saturday against Pittsburgh Riverhounds SC to secure a point in a 3-3 draw. A goal from Leland Archer and a brace from Claudio Repetto powered Charleston’s offense in the result. The Riverhounds grabbed a late equalizer that canceled out the Battery’s late one-goal advantage to share the points.

Pittsburgh kicked off to start the march and were quick to look to establish their game plan from the wings. The hosts got on the scoreboard first following a ball into the box from the right flank by Russell Cicerone to Todd Wharton in the 6th minute. Charleston looked to counter following the early goal, but movements forward were limited. Claudio Repetto had the first opportunity for the Battery in the 15th minute, but his attempt inside the box was too tall for the net. Following the shot, Charleston began to see their offense develop more as the half played out. The Hounds continued with their strategy to attack from the outside and added a second goal from a corner kick in the 27th minute, Shane Wiedt headed home Cicerone’s pass off the corner.

The Battery struck back in the 35th minute when Leland Archer scored his second goal in as many games following a Robbie Crawford corner kick. Archer converted with a perfectly-placed header to the near post that snuck past goalkeeper Danny Vitiello. The corner was conceded after AJ Paterson sent in a strike from roughly 40 yards out that forced Vitiello to make a save. The Battery began finding their footing following Archer’s goal, commanding about 67% of possession in the final five minutes of the half. Pittsburgh took the 2-1 lead into the break, while Charleston outshot Pittsburgh (4 to 3).

Play resumed and Charleston nearly equalized in the first minute of the second half when Nicque Daley had Vitiello one on one and the goalkeeper was there to make the save. The Battery came out of the break eager to equalize and sent numbers forward in search of a second goal. Pittsburgh were unafraid to counterattack, however, as Alex Dixon sent in a dangerous shot in the 55th minute that went wide right, with Jarad van Schaik’s defense on Dixon contributing to the attempt going off target. Repetto found the equalizer for the Battery in the 68th minute with a header following a set piece play, assisted by Angelo Kelly. The goal was Repetto’s seventh of the season and his first appearance on the scoresheet since August 20.

Charleston scored the go-ahead goal in the 81st minute when Repetto fired in a one-time shot off a volley from Erik McCue. The play was built up from the outside before the ball went to McCue for his first assist of the season. Repetto’s brace was the second of the Italian’s first season in professional action. The Hounds looked to fight back after allowing three unanswered goals in the 86th minute when goalkeeper Joe Kuzminsky made an impressive save to deny Cicerone. The hosts would grab a third goal a minute later with Dixon leveling the score 3-3. Pittsburgh attempted to seize the momentum into stoppage time with a heavy press on offense, forcing Kuzminsky to make a save in the 92nd minute. Both sides exchanged unsuccessful forward advances at the end before the final whistle blew.

Charleston’s come-from-behind effort was of note as it was the first time this season the Battery overcame a multi-goal deficit.

Battery Head Coach Michael Anhaeuser was proud of the team’s drive to fight back after going down two goals early in the first half.

“The guys did a great job, I’m so proud of the players for not dropping their heads, not really giving in after going down 2-0, because that can happen on the road,” said Anhaeuser. “We’re disappointed because you get up 2-3, we worked our way back in, but have to settle for the draw.”

“We knew it was going to be back and forth, [Pittsburgh] were going to throw everything forward for a full 90 minutes,” said Anhaeuser. “It was great Leland got his second goal [of the season] in the first half, then we really came out in the second half and took control. [Pittsburgh] sat back a little bit, dropped their wings back and we put pressure on them. We got that second goal with Claudio and then incredibly went up 10 minutes later.”

Battery forward Claudio Repetto said the three unanswered goals by Charleston exemplified the courage of the team in the face of adversity.

“I think it speaks a lot about the character of this team,” said Repetto. “All of us as individuals react well and when things don’t necessarily go our way, we have that attitude that can come out of situations like today and keep our character to get some really positive results.”

Repetto highlighted the positives during the second half and said the team will look to build on that despite the draw.

“Soccer is always two teams on the field and one is always going to be happy, the other one disappointed, it doesn’t always go your way,” said Repetto. “The only thing you can do is manage your attitude and where you’re at. Looking at our second half, it shows a lot about our desire to get back and show people we are there to be in a playoff position. I think if we keep this attitude, we can expect some good things.”

Coach Anhaeuser will look to use this performance to build on the week leading up to their next two matches, both against the Tampa Bay Rowdies.

“We’ve got Tampa Bay twice, we know what they are, we know they defend, probably the best defenders in the league,” said Anhaeuser. “We’ve got to do to them what we did in the second half tonight. Tonight we came out, we played and we saw some of our ability to move the ball,  that was great to see because we know we’re playing a good team next week in Tampa Bay.”

The Battery will take the point earned in Pittsburgh and return to the Lowcountry ahead of their home match against the Tampa Bay Rowdies on Saturday, October 2. The fixture at Patriots Point is the third of four between the Battery and Rowdies this season.