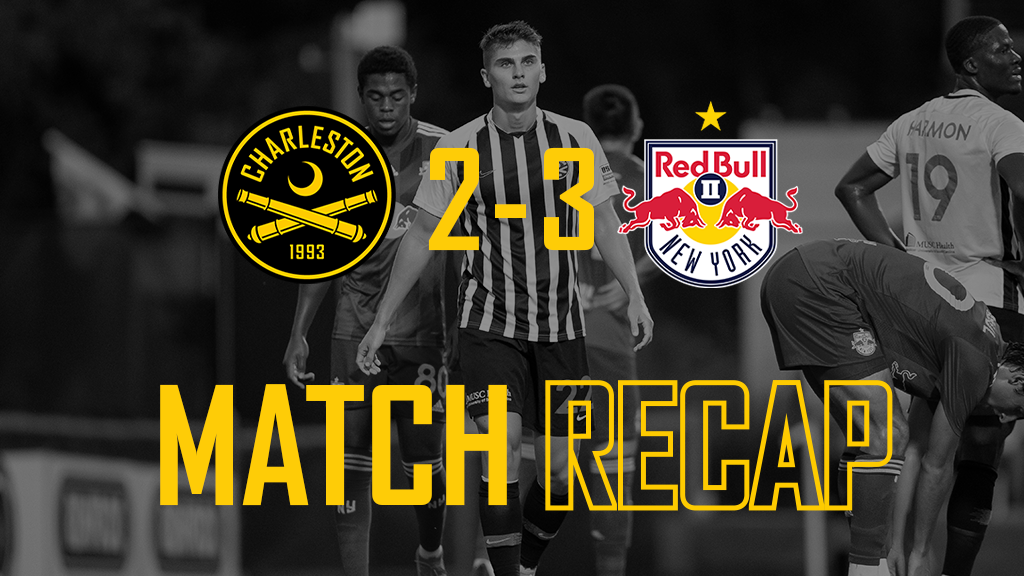 An early own-goal would be the difference maker Wednesday night as the Charleston Battery fell 2-3 to New York Red Bulls II at Patriots Point. The Black and Yellow put up a challenge late in the second half, looking as if they would walk away with a point, but were unable to find the back of the net as time ran out for the home team. The visitors’ win keeps New York’s unbeaten streak in Charleston alive for at least one more year.

The first half featured plenty of chances for both sides. Battery forward Geobel Perez nearly broke open the game with a strong shot from outside the box, however the strike hit the left post and went wide. Both Perez and Josh Penn each registered two shots through the first thirteen minutes, although none were able to convert. New York opened the game in the 14th minute by forcing a Battery own goal following a counter attack by Serge Ngoma. The visitors added a second goal minutes later after Jake LaCava scored inside the box to the near post.

The Battery got one back in the 34th minute when Joel Bunting headed home his third goal of the season after a set piece play. The Charleston native reacted to a deflected ball and sent it through the reach of goalkeeper AJ Marcucci. DZ Harmon looked to level the terms following Bunting’s goal a moment after, but his attempt was blocked. Penn again aimed for goal in the 43rd minute however the shot went wide right. New York took a 1-2 lead into the half, while Charleston outshot the visitors eight to six.

Play resumed in the second half featuring the same intensity as the half prior. Jeremy Rafanello added a third goal for New York with a header from the center of the box in the 47th minute. Rafanello’s header was tipped by goalkeeper Joe Kuzminsky and narrowly stayed under the crossbar. The Battery were quick to press for a second goal after the third concession. Among the most promising attempts came from Burke Fahling, who fired in a shot from outside the box that forced Murcucci to make a tight save in the 57th minute. Zeiko Lewis had a promising look in the 69th minute with an opportunity inside the box, but his attempt was too tall for the crossbar.

Charleston struck back in the 80th minute following another set piece play, this time Leland Archer supplied the diving header that made the score 2-3. The goal was the first of Archer’s professional career and had just enough power behind it to charam off the crossbar and down past the goal line. Lewis notched his ninth assist of the season, putting him tied for most in the league for 2021. The Black and Yellow really found momentum as the game’s dying minutes began to play out. New York’s defense, however, stood strong just enough to outlast the hosts’ efforts despite two conceding two corners in the final moments. AJ Paterson had among the best opportunities to equalize with a shot in stoppage time from outside the box, however his strong strike went narrowly wide right of the far post.

“It’s disappointing, we were going out to try and be more aggressive offensively and they caught us early with their pressure,” said Anhaeuser. “We had to battle back, got back 1-2 and regrouped at halftime. We got going in the second half, but they quickly got us right as we were setting things up. When you’re battling back and you’ve worked so hard, sometimes it’s difficult.”

On responding to the early deficit, Anhaeuser praised his team’s fight to level the score.

“The guys really worked hard and wanted it, they had the fans on that end and were trying really hard to get that third goal,” said Anhaeuser. “We got in there and we put pressure on them, if we could have got that third one to tie it up, who knows, we could have gotten a fourth one.”

“The end of the second half, it shows the heart that we can have,” said Bunting. “So we just have to start the game with that same energy and go forward and prevail. It was just difficult to come back, but I think we responded well with good movement in the first half.”

The Battery will face a tough away test in Pittsburgh when they visit Riverhounds in another crucial match on September 25.

“We just have to have a short memory, every game is different but every game starts 0-0” said Bunting. “We have to create more good chances for winning this weekend on the road.”

Looking ahead to Saturday’s duel in Pennsylvania, Coach Anhaeuser recognized the weight that match carries on the playoff race.

“Every game is important from here on out, we’ve done well on the road the last few times so we need to go in there and play like we did at the end of the half, play like we did in the last 30 minutes here,” said Anhaeuser. “We’ve got our work cut out for us and these guys can do it. They’re not going to quit, none of these guys.”

The Battery will travel to play Pittsburgh Riverhounds SC this Saturday, September 25 in a clash between black and yellow clubs. The trip is the first visit to Highmark Stadium for the Battery since September 14, 2019.