Battery Earn a Point in 0-0 Draw with Orange County 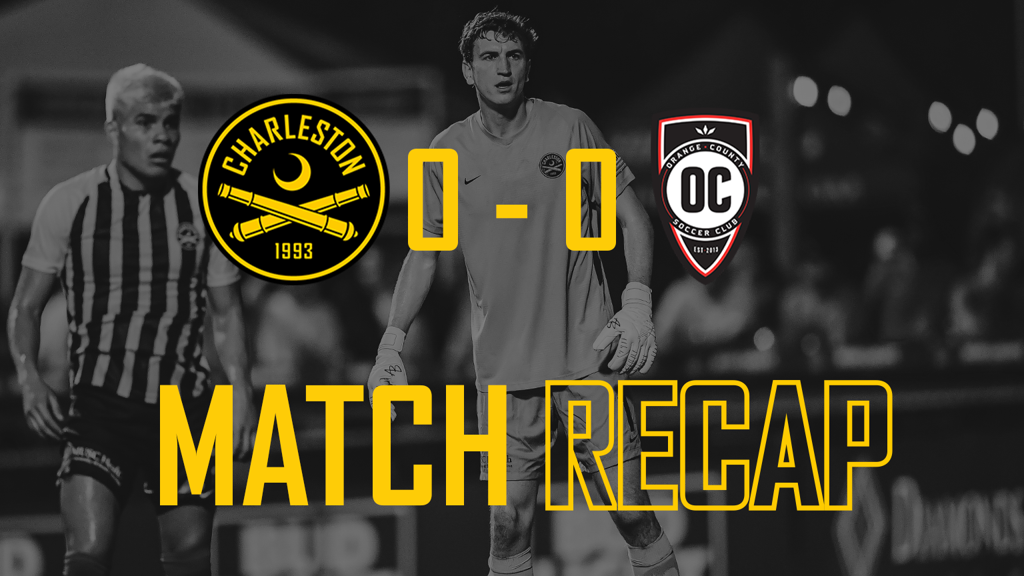 It was a defensive showdown at Patriots Point as the Battery earned a point Saturday night in a 0-0 draw with Orange County SC. The offensive opportunities were slim through 90 minutes while a strong performance by the Battery back line and goalkeeper Joe Kuzminsky kept the West Coast opponent off the scoresheet for a shutout.

The first half started with an early opportunity from Nicque Daley who worked his way into the box, trying to dribble through the Orange County defense, however he was unable to get a shot off. The visitors had a chance in the 13th minute when Sean Okoli took a right footed shot inside the box but his attempt was blocked by Patrick Hogan and cleared by AJ Paterson. The Battery looked to have pulled away in the 17th minute when Daley put the ball into the back of the net, until the referee indicated a handball in the build-up by Daley, nullifying the goal.

Ronaldo Damus had a good look on goal in the 19th minute for the visitors, but his attempt from outside the box went wide left of the net. Both defenses continued to stand strong as the half played out. The Battery had another opportunity in the 27th minute when Ben Di Rosa sent in the cross to Claudio Repetto in the box. Repetto, however, narrowly missed getting a good piece of the ball to put the header on goal. Both sides pressed forward as the half neared a close with Zeiko Lewis providing the hosts with three attempts in the final seven minutes with none converting. Possession for the half was about as even as the scoreline, with Orange County retaining the ball a slim majority of the time at 55%.

Play resumed with a similar slate of action as the first half as both defenses were unwilling to concede to their opposition. Daley again had the opening opportunity of the half with a shot from outside the box, assisted by Repetto, but his attempt was blocked. Damus had one of the more dangerous opportunities of the night. Coming off a corner kick, Damus’s right-footed strike would send the ball wide right, keeping things even. Damus again had a shot on target minutes later, but Joe Kuzminsky was there to deny the Haitian international with his first of three saves on the night.

The defensive standoff continued as the second half played out. Stavros Zarokostas, off the bench, was quick to provide opportunities for the Battery, firing a shot from long range which was blocked in the 73rd minute. DZ Harmon, also off the bench, provided looks for the Battery from the midfield. Harmon worked his way through Orange County’s defense for a shot from outside the box in the 79th minute, assisted by Lewis, that went wide right of the net. Although Charleston applied pressure towards the end of the regulation, Orange County’s defense was there to meet the challenge. Josh Penn won a late free kick to present a chance for the Battery, however the Black and Yellow could not convert the opportunity. The match concluded scoreless as Charleston finished the match with 10 men following a red card issued to Harmon in the closing minutes of regulation.

“Defensively we were solid and we were probably up against the fastest player in the league tonight, [Ronaldo Damus], he’s a handful,” said Anhaeuser. “You got to give credit to [Orange County], they never really let us get those chances and get our rhythm going. They kept the ball when they had to and, when it popped out, they seemed to win the 50/50s.

“We covered defensively and you get a shutout, you’re always happy about that.”

Anhaeuser commended Kuzminsky’s performance in goal, with the shot-stopper earning his fourth clean sheet of the season.

“When a goalkeeper gets a shutout, he’s happy, and we can build on that because we have to go into Hartford on Wednesday and get the job done,” said Anhaeuser.

Defender Leland Archer acknowledged the strong defensive performance while recognizing areas to work on ahead of the Hartford match Wednesday.

“I think we kind of missed chances to connect on that last final pass, we did well defensively and felt sharp,” said Archer. “It’s not three points, but it’s one point for us. We’ll take it and move on with it.”

With a quick turnaround between games, the Battery now focus their attention on facing Hartford for the second time in roughly two weeks.

“We’ll just focus, regroup and come right back out again Wednesday,” said Archer. “Right now, every game’s important, so we definitely need to keep the attitude up and bring that into every game moving forward.”

The single point placed Charleston in fourth in the Atlantic Division standings, a point ahead of both Charlotte and Hartford. The Battery will look to hold their position as they hit the road to face Hartford Athletic on September 1 at 7 p.m.