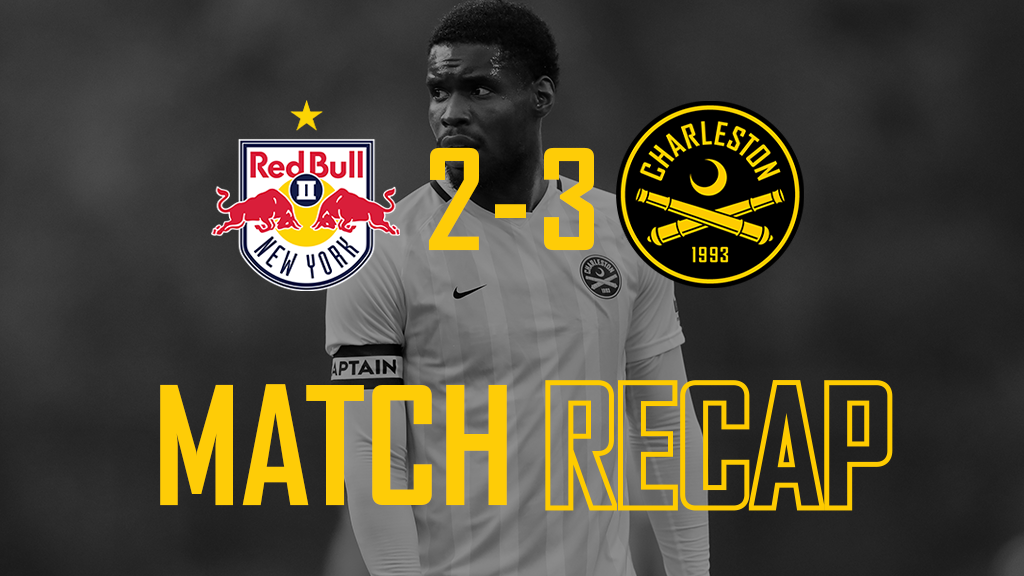 Charleston got back in the win column Friday with a 2-3 victory over New York Red Bulls II. The five-goal thriller saw three goals scored in the first ten minutes, via DZ Harmon (2’), New York’s Mathias Jørgensen (5’), and Josh Penn (10’). Claudio Repetto scored the match-winning goal (44’) to hold off a late strike by Red Bulls II striker Serge Ngoma (90’+2). The victory was Charleston’s first against New York since 2016 and first this season after drawing the New Jersey side twice so far.

The first half was not short of action as the goals came early and often. DZ Harmon got the scoring started in the 2nd minute with a clinical header into the back of the net, assisted by Geobel Perez. New York were quick to respond, however, equalizing in the 5th minute via a Mathias Jørgensen shot from the right side of the box that went just over goalkeeper Joe Kuzminsky’s reach. The Battery were eager to reclaim their lead and did so in the 10th minute when forward Josh Penn found the back of the net for the first time with Charleston.

Both teams continued to trade shots as the half progressed, both Perez (12’) and Penn (21’) had promising shots that were both saved by New York netminder Luca Lewis. Red Bulls II nearly equalized again when Omar Sowe worked his way into the box for a shot on Kuzminsky, but Kuzminsky got a strong hand on the shot to send it off the crossbar and out of bounds. Repetto added the third goal for the Battery towards the end of the half following a towering pass into the box by Frank Nodarse to Perez. Perez then sent a perfectly-placed header that Repetto buried into the back of the net. It was Geobel’s second assist of the night.

The Battery resumed play with much of the same energy as the 45’ priotr. Repetto and Paterson connected in the 50th minute inside the box but Claudio’s final touch was denied by a solid save from Lewis. New York came out with similar fire and found a groove in advances on offense during the first portion of the second half. Among the best opportunities for Red Bulls II came in the 62nd minute that saw Paterson take on three New York players on a counter attack. The Grenadian defender was undeterred, however, handling the Red Bulls II charge that resulted in a shot off target by Jeremy Rafanello, forced wide by Paterson’s defensive slide.

The Battery back line held firm despite New York’s high-octane press for much of the remaining minutes. Patrick Hogan came up with a crucial clearance in the 73rd minute and Leland Archer made a sensational goal line block in the 80th minute to keep Red Bulls II from scoring again. Both defenders made their returns to the starting lineup for the first time in three matches, but did not seem to miss a beat. The rain that came earlier in the match was resurrected in the final 15 minutes of the game, as the hosts got one back during stoppage time to pay off their persistence. Jake Lacava found Serge Ngoma and the 16-year-old striker finished it off with his first professional goal. The dying minutes played out and the Battery notched their first victory over Red Bulls II since 2016, also a 2-3 result at MSU Soccer Park.

Battery coach Dusty Hudock was proud of the team’s execution of the strategy during the victory.

“I thought it was a very good performance, I think we clearly have some things to work on, but that’s always the case,” said Hudock. “We stuck to a plan that Coach [Anhaeuser] put together and worked to get to the strikers quickly, we looked to get runners up the sides. That gave us several opportunities to score and you can’t ask for more than that.”

Joe Kuzminsky, Leland Archer and Patrick Hogan all appeared again in the starting lineup Friday for the first time in three matches, and Hudock credited their returns in enhancing Charleston’s performance.

“I think they did very well, but I think the midfield helped a lot too, in the last 15 or 20 of the first half, they all worked together, not letting balls go straight to the [opposing] strikers’ feet,” said Hudock. “We’re going to score a lot of goals because we’ve got skilled players in the back to protect us and then create opportunities to finish.”

Battery forward Josh Penn netted his first goal in the USL Championship in his first start with the Battery.

“It was exciting for me to get my first Championship goal, but more importantly, it was a hard fought three points on the road and never comes easy in this league,” said Penn. “We had a tough stretch coming from the loss at Hartford to here, but I think we responded well, so we're all really glad to get the three points.”

Penn mentioned the weight his goal carried and how crucial it was for the team to respond to New York’s quick equalizer early in the match.

“That was definitely important because you have to respond to getting scored on,” said Penn. “So getting a quick goal and then a third one was a good momentum shift for us, it helped us close out the win.”

As important as tonight’s victory was, Hudock and the team know they must seize the momentum and continue stringing together victories as the playoff push intensifies.

“We’re always looking to win when we’re on the road or at home, I think we owe it to our fans to do that,” said Hudock. “Every game is crucial, so this game and the next game are as important as the first game. What we’re trying to do is get through some typical periods that we’ve gone through, as we get towards the end of the season, I think we’re going to be in good shape.”

The Battery take this win and return home Saturday, August 28, to face Orange County SC at Patriots Point. Tickets for the match are still available and fans can take advantage of $15 Club section tickets, 40% off, now through Sunday, August 22 – reserve your spot and secure your savings here.