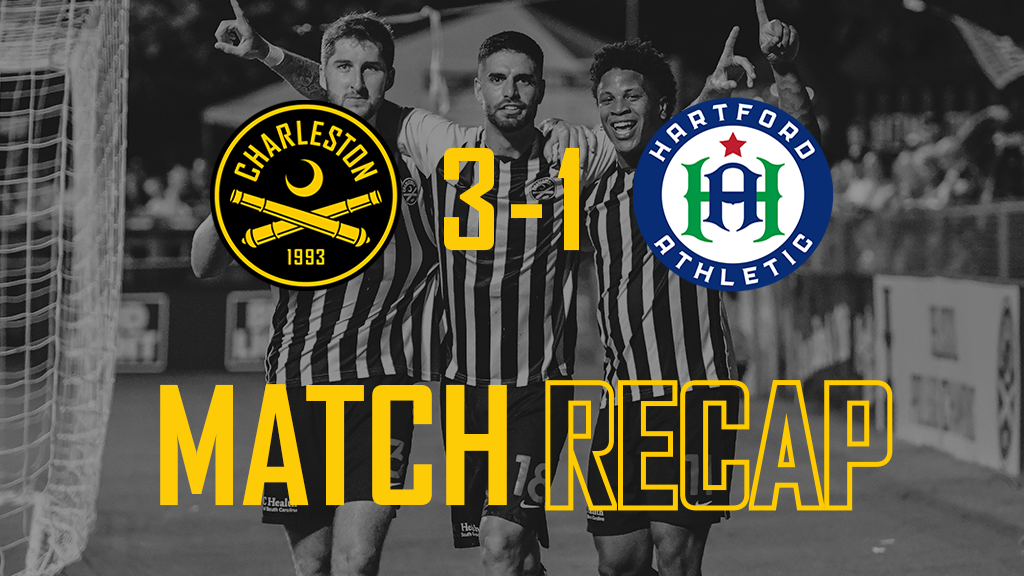 The Battery secured an important three points Saturday night in a 3-1 win over Hartford Athletic in front of a roaring crowd at Patriots Point. Over 3,500 fans were in attendance for the first match at full capacity in the new stadium, a Patriots Point record. Goals by Romario Piggott, Claudio Repetto, and Nicque Daley were too much for a Hartford side unable to capitalize on strong possession and a goal late in the second half.

A heated first 20 minutes of the match saw no ground given either way, but in the 21st minute Battery midfielder Romario Piggott changed that with his first goal of the season. The birthday boy was found by a Stavros Zarokostas cross at the edge of the 18-yard box before sending in a curling shot into the top right corner of the goal. The goal was Piggott’s sixth with the Black and Yellow.

The Battery defense held their own throughout the half, maintaining a rocky presence to thwart Hartford’s advances. Hartford’s Christian Gómez and Danny Barrera each had shots within the first 20 minutes, but both efforts went wide of the net. Looking to equalize, among Hartford’s best advances came in the 29th minute when Younes Boudadi sent a towering cross into the 18-yard box, but Battery goalkeeper Joe Kuzminsky advanced off his line to defuse the threat. The Battery countered with some advances of their own in the second part of the first half, but Hartford stayed true and preserved the 1-0 scoreline.

The second half opened with a pair of Zeiko Lewis shots, in the 47th and 50th minutes, but neither were able to convert. The Battery’s lead was doubled in the 58th minute. Lewis was there for the assist, finding Claudio Repetto with a perfectly-placed through ball on the right flank. Repetto then handled the rest, squaring up to the ball and delivering a strong strike with his left foot that blazed off the hands of Hartford goalkeeper Jeff Caldwell before landing in the back of the net. The goal is the second of the Italian’s professional career.

The match provided a trade of advances and defensive stops by both sides for the next 24 minutes, but neither club were able to find the back of the net. Hartford converted for the first time of the night in the 83rd minute when Tulu sent in a header from the back post, assisted by a cross from Barrera. The opposing side went to work for an equalizer by applying pressure to the Battery defense, but were countered with breakaways from Temi Adesodun and DZ Harmon, both taking shots but unable to get the third goal. Hartford continued trying to level the scoreline in the first minute of stoppage time via a Jeciel Cedeno shot, but the effort was wide of the net. Charleston’s two-goal lead was restored at 90’+4 by Nicque Daley, who willed his way into the box after dispossessing the ball from Hartford and then poked a shot past Caldwell for goal number three for the Battery and his third goal of the season.

The triumph was the Battery’s first home victory since winning 3-0 over Loudoun United FC on June 26. As of writing, the three points move the Black and Yellow up one spot in the Atlantic Division table and into sixth place.

Battery Head Coach Michael Anhaeuser was pleased with his team’s performance against Hartford.

“I'll tell you what, these guys produced, we played birthday boy [Romario] tonight and got his first start since his injury last year,” said Anhaeuser. “These guys were tremendous tonight, what can you say about the resiliency in that final 10 minutes, [Hartford] score on the momentum that seems to swing, then Nicque finally breaks through.”

The Patriots Point crowd was an influence on the match, according to Anhaeuser, and was a positive one for the Black and Yellow.

“Over 3,000 fans, you know, I was sitting out watching warm ups and watching the crowd come in, we're getting ready to go out and there's still people walking down the street,” said Anhaeuser.  “I'll tell you what, winning three-one at home with this many fans is incredible.”

Romario Piggott was happy to score his first goal of the season against a tough Hartford team.

“I was really happy for the opportunity to score a goal on my birthday,” said Piggott. “The most important thing is that we won, but we have to keep working, we have to keep improving and keep doing like we did tonight.”

Piggott’s first goal came in his first start of the season and was meaningful to him following a 2020 campaign that was cut short due to injury.

“I had a really bad injury last year and was out for a long time, I'm really happy to be back again with the guys and helping as much as I can,” said Piggott.

The Battery return to Patriots Point on Friday, July 23, to take on Charlotte Independence in the first leg of the supporter-led Southern Derby. Tickets are still available and can be purchased through SeatGeek here.