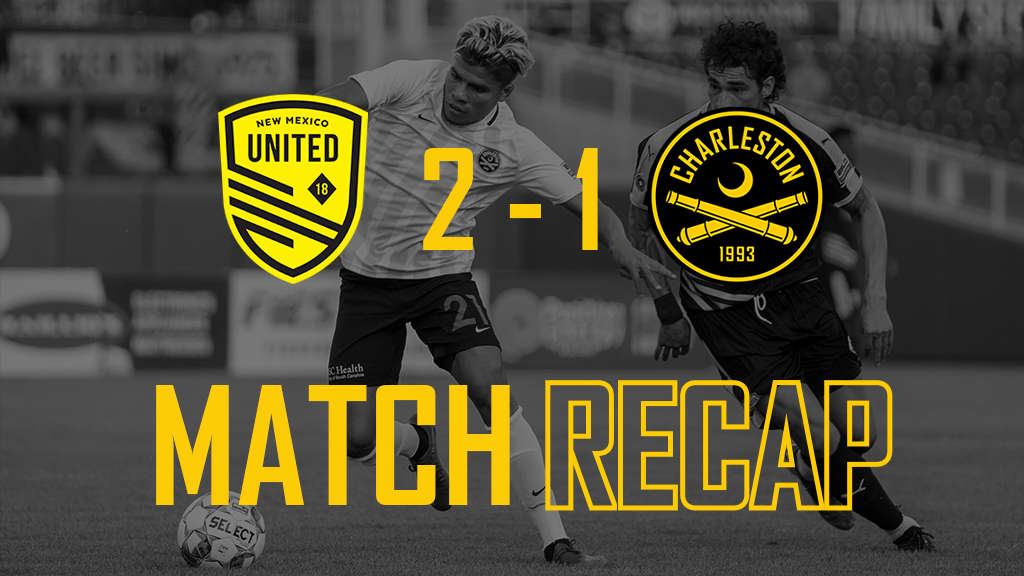 The Battery fell 2-1 on the road against New Mexico United in the first meeting between the two clubs on Monday night. Charleston forward Claudio Repetto scored his first career professional goal, but the hosts’ breakthrough in the second half proved to be the difference.

The first edition of the Black and Yellow Derby, as it’s been dubbed, needed only 15 minutes to get the fireworks going. New Mexico struck first when Juan Guzman connected with Kalen Ryden and Ryden got around Claudio Repetto to head the ball home. New Mexico nearly doubled their lead in the 20th minute but Devon Sandoval’s attempt was saved.

The Battery struck back in the 38th minute when Repetto found redemption and his first career professional goal. The score was set up by Zeiko Lewis who found DZ Harmon on a switch to the right side of the field, Harmon then delivered a perfect cross to his old Coastal Carolina teammate, Repetto, who set the ball into the back of the net off his chest. Harmon had made threatening runs in the previous 15 minutes and finally broke through the United defense to produce on the score sheet.

The second half picked up right where the first half left off. New Mexico United were the first to threaten only two minutes after kickoff. The hosts did not have to wait too long for their chances to find the back of the net again as they found a breakthrough seven minutes into the half. The goal was set up when New Mexico’s counter attack capitalized from a cross in front of the Battery net. Kuzminsky did well to make the initial save, but the ball bounced back off New Mexico’s Devon Sandoval and rolled into the back of the net to make it 2-1.

Charleston responded by putting more numbers forward in search of an equalizer. Harmon’s shot in the 61st minute was the Battery’s first real chance of the half. The Battery did well to keep New Mexico from adding a third goal that could put the game out of reach. Kuzminsky continued his form in front of goal, totaling six saves on the day. Among the Battery’s best chances to equalize came in the 84th minute when Logan Gdula found Romario Piggott in the center of the box, but Piggott’s shot ultimately went high over the crossbar.

Battery Head Coach Michael Anhaeuser was proud of his team’s ability to handle the environment on the road at Isotopes Park.

“We played with some composure on a tough field, even when we went down, we did a great job of coming back and got the goal to equalize,” said Anhaeuser. “We got caught on the counter and we went down, but after that, again, we came back and created enough chances to get that tying goal, and that was just disappointing we couldn't do that because we did some good things.”

The night saw two first-year players connect for the Battery’s lone goal of the contest, Harmon to Repetto, who were teammates at Coastal Carolina University before joining Charleston.

“Very proud of the guys for their effort and their work and in a tough environment,” said Anhaeuser. “That's great because Claudio is a number nine going into the box and DZ did fantastic, he's grown every game and we told him to be aggressive on the wing.”

Harmon notched his first assist of the season and was a constant force on the right side of the Battery attack. Harmon said the service to Repetto was a play they had been crafting since their time in Conway, South Carolina.

“Since the college days we always talked about where, when I'm down the line, he has to get in a box, and he did that,” said Harmon. “It was a great pass from Zeiko [Lewis] as well. Unfortunately we couldn't get the win, but there's a lot of positives that we could take from the game today."

“The most important thing is the intensity, I thought we played with a great deal of intensity tonight,” said Harmon. “We just need to finish our chances because we created a lot of chances, but we didn't finish, so we can adjust in training come Hartford this Saturday.”

After the match, Burke Fahling was shown a red card for foul and abusive language. The Battery return to Patriots Point on Saturday, July 17, to take on Hartford Athletic in the club’s first meeting of the season with the Connecticut outfit.