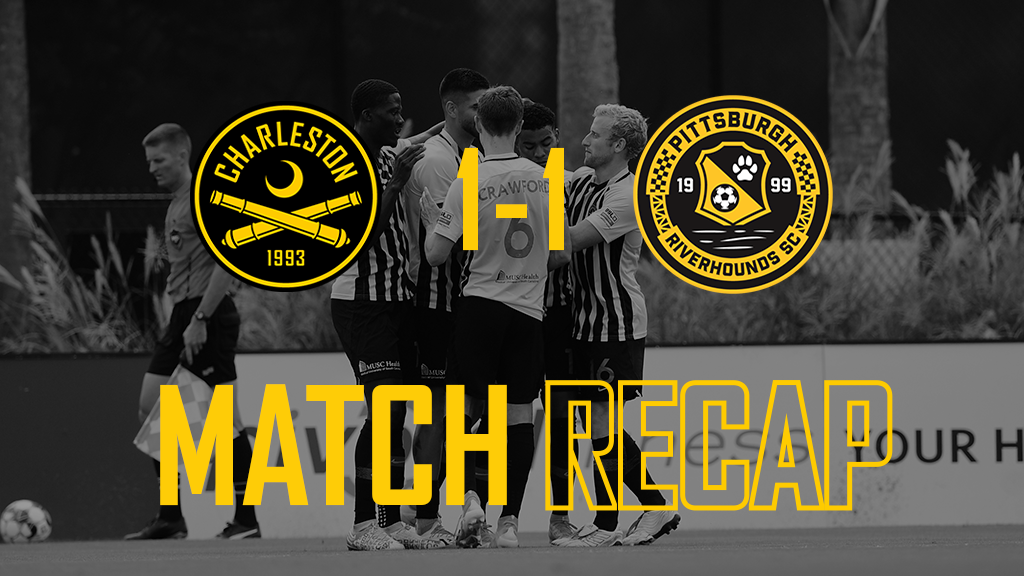 The Charleston Battery secured one point Wednesday afternoon at Patriots Point in a 1-1 draw against Pittsburgh Riverhounds SC. An early 9th-minute lead by the Battery held throughout the match until the Hounds’ pressure found a breakthrough and equalized late in the second half. The match featured another solid performance by Battery goalkeeper Joe Kuzminsky to hold Pittsburgh to the single goal and secure the point for Charleston.

The Battery kicked things off early in the first half after shaking off early possession control by the Riverhounds. Charleston struck first in the 9th minute when Geobel Perez scored his first professional goal. The play started with a Charleston throw-in from deep in their own defensive third. The ball was quickly pushed forward by Nicque Daley and Daley played a charging Perez at the top of the 18-yard box. Perez’s first shot was blocked by Hounds goalkeeper Danny Vitielloe, but the block bounced back favorably to Perez who made the finish into an open net.

Pittsburgh worked to find the equalizer throughout the half. The visitors nearly did in the 16th minute off a corner kick, but Perez made the play at the goal line to deny the Hounds’ Mekeil Williams a goal after his header got past Kuzminksy. Geobel’s stop was crucial as he headed the ball off and stopped Pittsburgh’s advance. The Battery nearly doubled their lead late in the half off a shot from Claudio Repetto, making his first start for the Battery. The narrow angle attempt from the left side was blocked by Vitielloe and a recovering finish by Nicque Daley was just wide of the net.

The Riverhounds came out for the second half applying heavy pressure to the Battery backline and creating several chances early. But it was Kuzminsky that would help maintain the lead after a diving one-handed save would deny Russel Cicerone’s shot from the center of the box.

The Battery would bring in reinforcements through the second half with four substitutions after the 60th minute. Pittsburgh, however, continued to find opportunities and managed to break through with just five minutes left in regulation. A pass off the back heel dangerously close to the endline by Pittsburgh’s Thomas Williamson, subbing in just four minutes earlier, would find Louis Perez to take a shot that was blocked near the post. Williamson quickly found the rebound to take shot through the fray and find the right corner of the net past Kuzminsky.

The remaining minutes would find both sides trading volleys while trying to find the go ahead goal. After six minutes of stoppage time, the teams returned to the locker room with the points split.

Battery Head Coach Michael Anhaeuser was proud of his younger players who stepped up but ultimately would have liked to see the full three points won.

“We got a few guys out with injury and you can see some of our young guys who stepped in did a great job,” said Anhaeuser. “But, playing 90 minutes in the heat is not so easy so it's a big learning curve. In the end, we're gonna take the point, but it is disappointing because we had that one goal early that would have been nice to get three points today.”

Wednesday’s match ultimately allowed for the first-year players to gain crucial experience against a talented Pittsburgh side.

“You know what you have to do, how you prepare yourself and your body and it's not easy ever, it's difficult. So, it's a big learning curve and I'll tell you what, I really commend what the guys did and how they stepped in there,” said Anhaeuser.

Battery goalkeeper Joe Kuzminsky spoke highly of the team’s fight as a unit as they look to build on this performance for the next match.

“We had a lot of guys come in that weren’t the most experienced, but we fought together,” said Kuzminsky. “We're pretty disappointed that we didn't get the three points, but we did get a result against a good team and something to build off of.”

Although the game didn’t start as clean for the Battery the team managed to settle in to shake off any early-game nerves.

“I think at the start it was a little shaky, but once we settled in and got our confidence going we took off from there,” said Kuzminsky. “It's a long season that we need everyone and that showed it tonight for sure.”

The Battery will take the point and take a break from the Atlantic Division as they head to Albuquerque, New Mexico, to face New Mexico United Monday, July 12 at 9:30 p.m. EST. Another matchup between black and yellow sides, it will be the first time playing New Mexico and will feature a faceoff between Coach Anhaueser and former assistant Troy Lesesne, now at the helm of the southwestern club.