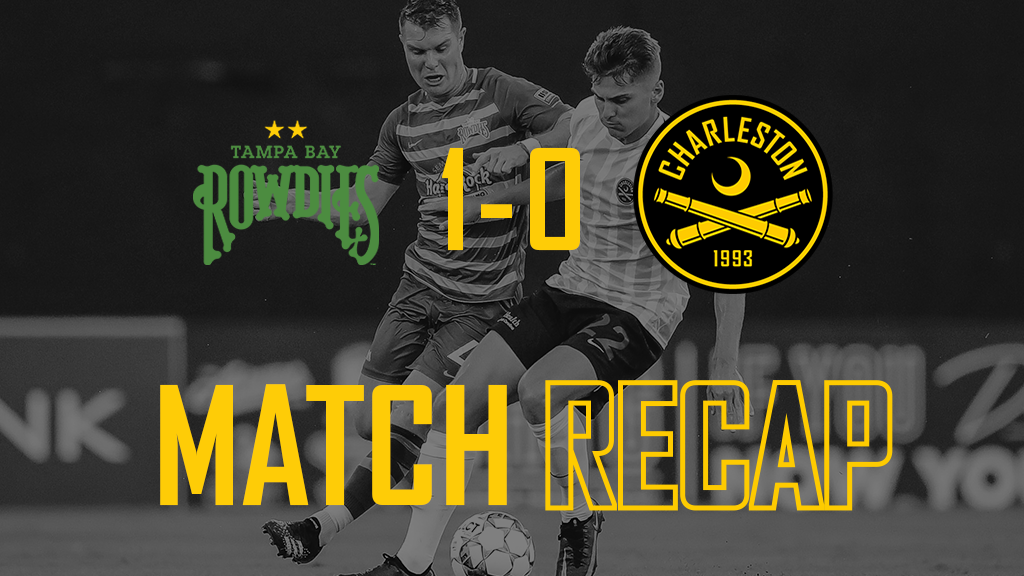 The Battery fell 1-0 Friday night after a hard-fought battle at Al Lang Stadium against the Tampa Bay Rowdies. Strong performances by goalkeeper Joe Kuzminsky and the Battery’s defensive unit held the league’s top team at bay throughout the match, but a penalty conversion in the 68th minute by Rowdies forward Sebastian Guenzatti made the difference.

The first half was scoreless after a strong performance by Battery goalkeeper Joe Kuzminsky to keep terms level. Kuzminsky made himself big in the 9th minute with a right-foot save to deny Sebastian Guenzatti an early goal. The Battery defense stood strong again in the 27th minute when Tampa Bay lingered inside the 18-yard box and prevented the Rowdies from converting. The threat was ultimately diffused when a shot by Leo Fernandes went over the crossbar. The Rowdies nearly broke through right before the end of the half when a header from Jordan Scarlett nearly found space just below the crossbar. Kuzmisnky’s reach, however, extended just enough to push the ball over the net and out of danger.

Tampa Bay retained possession for a 67.1% majority through the half and out-shot Charleston 8-0, but were unable to find the back of the net. Among Charleston’s best chances came in the 11th minute when Nicque Daley powered his way into the box, but was unable to get a shot off in the dangerous position. Battery forward Stavros Zarokostas left the match in the 23rd minute for an apparent injury and was replaced by Joel Bunting.

The Battery came out of the half with energy as Nicque Daley fired off the side’s first shot of the night in the 47th minute, but it was blocked before it could reach the keeper. Charleston’s adjustments were evident as the Black and Yellow retained possession more and made more advances inside the attacking third. The Battery held the majority of possession at 52.4% for the whole second half.

The game’s deciding moment occurred when the Rowdies were awarded a penalty after Leland Archer was called for a foul on Tampa Bay’s Jordan Adebayo-Smith inside the box during the 67th minute. Guenzatti took the penalty in the following minute and converted to give the hosts a 1-0 lead. Unafraid, the Battery bounced back with an immediate counter offensive that saw Burke Fahling find Bunting inside the box, but Bunting’s equalizing attempt went over the crossbar. The rest of the half progressed defensively as neither side were able to convert the night’s second goal. Midfielder Romario Piggott made his season debut in the 84th minute, substituting for Angelo Kelly.

Battery defender AJ Paterson spoke on the strength of the squad’s defense during the night.

“I think as a unit we were able to work together and slow up their attacks,” said Paterson. “They threw numbers forward and they're a strong attacking team but it was unfortunate with the penalty call. We went out there and we defended hard, we defended well and that one simple mistake that cost us the game.”

The squad will look to take the positives from this match and build on them for the next three meetings with Tampa Bay.

“We knew what they were gonna bring and we have to play them again this season, so we're dusting this off and we're gonna look forward to our next game and the next time we see them,” said Paterson.

The Battery will be back in action at Patriots Point on Wednesday, July 7, when they take on Pittsburgh Riverhounds SC for the first time since 2019. Tickets can be purchased through SeatGeek here.