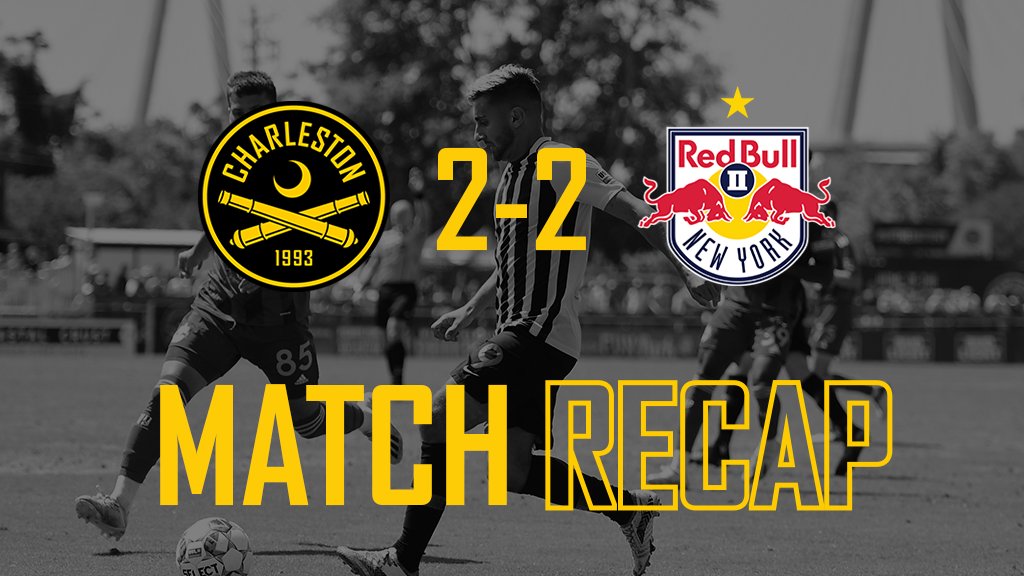 The Charleston Battery and New York Red Bulls II match ended in a 2-2 draw on Sunday at Patriots Point. The Battery scored early in the first half, with Stavros Zarokostas (3rd minute) and Erik McCue (24th minute), but Red Bulls II struck back in the second half with goals from Mandela Egbo (62nd minute, penalty) and Roald Mitchell (66th minute) to even the result. Both sides had chances to pull ahead in the closing minutes, but neither succeeded in breaking through.

Charleston got the scoring started early, when Stavros Zarokostas found the back of the net in the 3rd minute. Zarokostas dispossessed New York keeper AJ Marcucci inside the 18-yard box and quickly turned around for his first goal of the season. Defender Erik McCue doubled the Charleston lead in the 24th minute for his first goal with the club. McCue was on the receiving end of a perfectly-placed Zeiko Lewis corner kick near the byline, and then slipped the ball through a narrow angle into the net.

The Battery had a variety of early chances throughout the first half, with Leland Archer (14th minute), Burke Fahling (15th minute) and Robbie Crawford (23rd minute) all threatening with shots. Red Bulls II created chances as well, but Battery keeper Joe Kuzminsky remained strong in saving a pair of shots by Roald Mitchell (16th and 44th minute).

The second half featured the same intensity, but it was Red Bulls II who did the scoring with a pair of goals in quick succession. New York was awarded a penalty in the 61st minute off a Leland Archer foul inside the penalty area, which was converted by defender Mandela Egbo a minute later for his third goal of the season. The visitors equalized in the 66th minute when Roald Mitchell weaved into the box and sent a shot into the far side of the net. It was Mitchell’s first professional start.

The score remained level the rest of the half, with both sides having chances for a breakthrough. Red Bulls II continued to threaten, but Kuzminsky was there to preserve the level terms, making some smart saves in the 68th and 84th minute to deny New York. Charleston had opportunities to pull ahead, but were met with a similar result, with a pair of headers from Zeiko Lewis (60th minute) and Geobel Perez (68th minute). Nicque Daley nearly grabbed the winner at the death in the 96th minute after working his way into the box, but his shot was just wide and into the side netting.

The result marks the second draw of the year between the Atlantic Division counterparts, and the fifth draw in their last six meetings, dating back to August 2018.

Assessing Sunday’s draw, head coach Mike Anhaeuser said, “I mean, we were moving the ball. We were putting them under pressure, but you’re feeling the wind and, it makes a big difference.”

“I don't think we played poorly, but they got that penalty, and you can see the tides changed a little bit and just had a little lapse defensively [in the second half]”

Commenting on Kuzminsky’s performance between the posts, he added, “Joe was huge. I mean the free header there, and then the one-v-one...we ended up being under pressure and he came up big for us. That point for us really goes to him in the end. You would hope it would have been three points, but, you know, we’ll take it and we got to move on and get ourselves ready for the next one.”

“I think the first 45 we did well, we got on top,” said Battery keeper Joe Kuzminsky. “We play this New York team a lot. Every single time they don't give up until the last minute, and we just got caught.”

“It's not a loss, you learn from it and just need to lock our defense down to get the shut out next time.”

With McCue, Fahling and Perez all making their first Battery starts, Anhaeuser continued, “We saw some good things in the first half, we saw the movement, and to move a couple players around gave some some rookies a chance to start tonight and they did a good job.”

The Battery will look ahead to secure their first three points next match back at Patriots Point on Friday, June 4th as LA Galaxy II visits Charleston for the first time since 2014. Limited tickets for the Friday night match are still available here.