Get To Know Our Opponent: Tampa Bay Rowdies 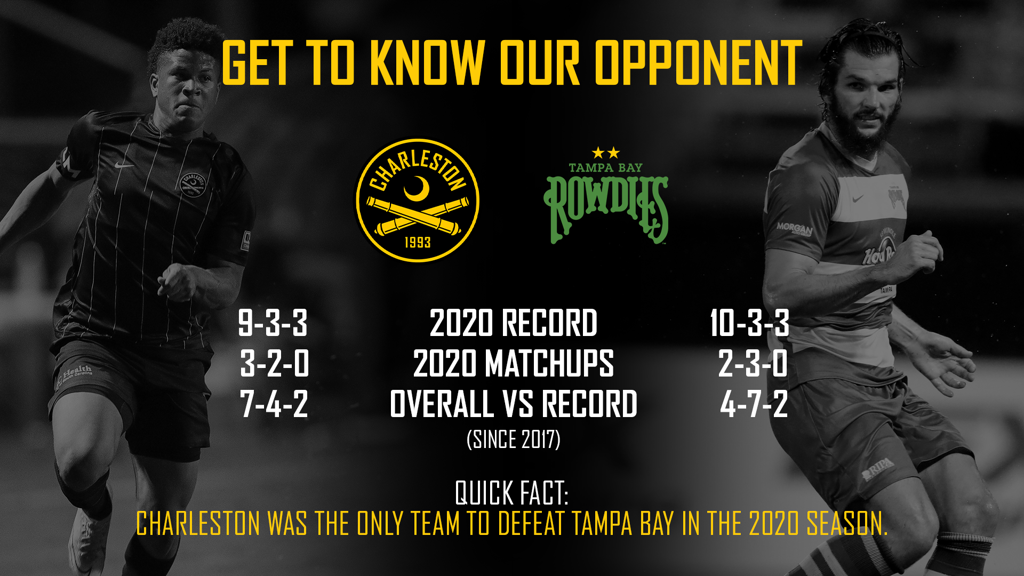 A breakdown fans have been waiting for, we are looking at our next Atlantic Division opponent: the Tampa Bay Rowdies. Tampa Bay and Charleston have developed a rivalry over the years as both clubs have been among the most prolific in the league, and it always shows when they meet on the pitch. The Battery currently lead the series with a record of 7-4-2.

Last season was a successful one for the Rowdies as the club took home the title for the Eastern Conference. Although the 2020 USL Championship Final was abandoned and they were unable to make a bid for the league crown, the club had an impressive run the whole way through. Tampa Bay compiled a 10-3-3 record and won Group H by three points. The Florida club were among the best defensive sides in the league, with defender Forrest Lasso taking home the league’s Defender of the Year award for the second time. Goalkeeper Evan Louro also had an impressive campaign between the sticks with 8 clean sheets, tied for second-most in the league.

Among the most heated games of the Rowdies’ season came against the Black and Yellow. During the regular season, the Battery were the only club to beat Tampa Bay, posting a 3-1-0 record over the Rowdies.

The series started with a 2-0 victory for Tampa Bay in Florida, where goals from Sebastian Guenzatti and Malik Johnson lifted the Rowdies. Tampa Bay then fell twice to Charleston at Patriots Point in a pair of 1-0 contests, goals from Stavros Zarokostas and Zeiko Lewis were the respective difference makers. In a chance to even the season series, Tampa hosted the Battery again late in the regular season. The Battery, however, got the best of them in a 1-2 thriller where an 84th-minute goal from Zarokostas secured the victory. Zarokostas’ brace canceled out an equalizer from former Battery defender Forrest Lasso.

During the postseason, it was the Rowdies who got the better end of the duel, beating the Battery 1-0 in the Eastern Conference Semifinals. The green and yellow club secured their first piece of silverware since 2012 with their Eastern Conference Title. Their playoff run also consisted of victories over Birmingham Legion and Louisville City to reach the Final.

The Rowdies have many key players returning for this season. Defenders Aaron Guillen, Jordan Scarlett and Lasso are all back to solidify the Tampa Bay back line. Louro also returns to anchor the defense in the net. Leading scorer and captain Sebastian Guenzatti will be marking his fifth season with the team in 2021. There were some departures, notably forward Kyle Murphy and midfielder Malik Johnson. The club made some additions with Conner Antley, who was the 2019 League One Defender of the Year, and forward Steevan Dos Santos, who brings a wealth of playing experience and goal-scoring ability. Head Coach Neill Collins’ squad looks to be poised for another title run, as the ex-Wolves man will manage Tampa Bay for a fourth season.

Last regular season, the Battery had the Rowdies’ number, especially with some strong home performances and a road victory to close out the series. Like Tampa Bay, Charleston is returning much of their core squad with some exciting newcomers joining the roster. The Battery’s defense did an effective job of handling the Rowdies’ offense during their meetings, with two clean sheets and only one goal conceded each in the last two meetings in Tampa. They will look to maintain similar strong performances this year, as these matches proved how much an impact just one goal can have given the strength of both defenses. On offense, Stavros Zarokostas will look to pick up where he left off, as three of his five goals last season came against Tampa Bay.

The Rowdies and Battery will clash four times this season, twice in Tampa Bay and twice in Charleston. The Battery will host Tampa Bay at Patriots Point on Tuesday, September 7, and again on Saturday, October 2. Tickets for the September fixture can be purchased here, and for the October fixture here.

Stay tuned for our next, and final, opponent preview coming soon!