Get To Know Our Opponent: Loudoun United FC 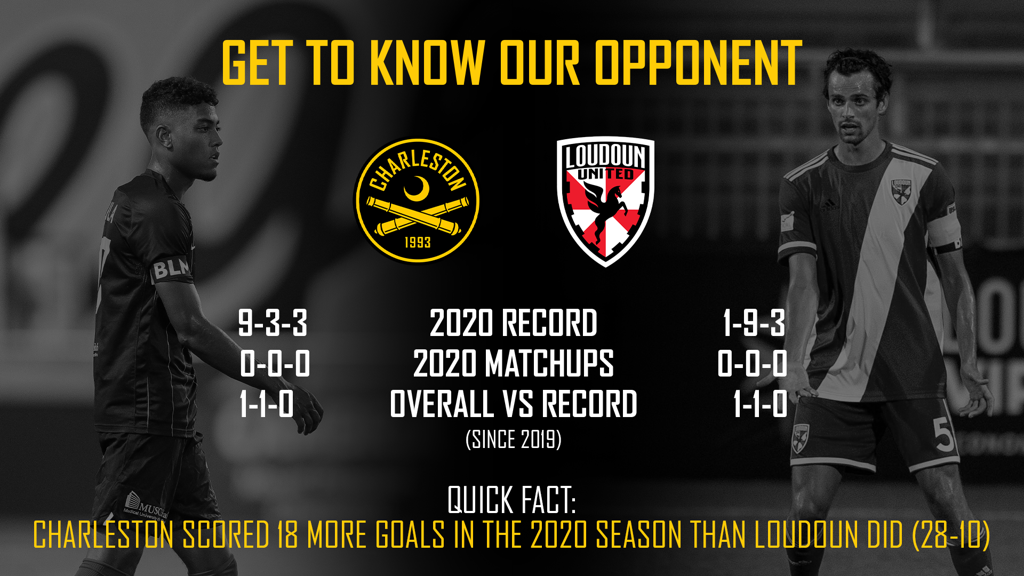 Next up in our breakdowns of this season’s Atlantic Division opponents, we’re taking a look at Loudoun United FC. Loudoun are another relatively new club to the league, debuting in 2019 as the USL Championship reserve team for D.C. United of MLS. The Virginia side met the Battery twice during their debut season and were scheduled to meet in an out-of-group match in 2020, but it was postponed and eventually abandoned.

The 2020 campaign was a tough one for Loudoun, as the club posted a 1-9-3 record that slotted them at the bottom of both Group F and the Eastern Conference table. Their lone victory came in New Jersey in a duel of MLS reserve clubs, a 1-2 win over New York Red Bulls II. Things just did not go Loudoun’s way during the year, which saw their final three matches abandoned in an already-shortened 2020 season.

Head-to-head, Loudoun and the Battery have split the series at one victory apiece. Charleston won the first match, 1-2, on the road in a game that featured goals from Taylor Mueller and Dante Marini to secure the three points. In the second match, Loudoun returned the favor and won 1-2 on the road, where a brace from Alioune Ndour was the difference-maker.

Expect Loudoun to aim for a better 2021 campaign, as the club has made a handful of offseason moves to enhance their roster. Among their most notable departures to address were forwards Elvis Amoh, the club’s top scorer in 2020, and Alioune Ndour. Midfielder Drew Skundrich, coming over from Sacramento Republic FC, brings some crafty playmaking and experience that the youthful Loudoun side will look to lean on. Forward Kairou Amoustapha, a member of the Niger U-20 National Team, should see an enhanced role this season to fill the void on offense, as he notched three goals and one assist for Loudoun last season. Head Coach Ryan Martin will look to mesh his newcomers, youngsters and veterans to rally the club for a bounceback year.

For Charleston, the key will be consistency against a Loudoun side that may shapeshift over the course of the four meetings. Consistency was the name of the game last season for the Battery, and it is likely to be in the game plan again this year with much of the core starters returning. Those familiar with Loudoun from the 2019 matchups include goalkeeper Joe Kuzminsky, defenders AJ Paterson and Jarad van Schaik, midfielder Angelo Kelly, and forward Nicque Daley. With every point valuable, the club won’t overlook Loudoun based on last year’s performances and will aim to adapt as necessary in each matchup with Loudoun’s fluid squad.

Loudoun and Charleston will clash four times this season, twice in Virginia and twice in the Lowcountry. The Battery will host Loudoun at Patriots Point on Saturday, June 6, and again on Friday, August 13. Tickets for the June fixture can be purchased here, and for the August fixture here.