Get To Know Our Opponent: Charlotte Independence 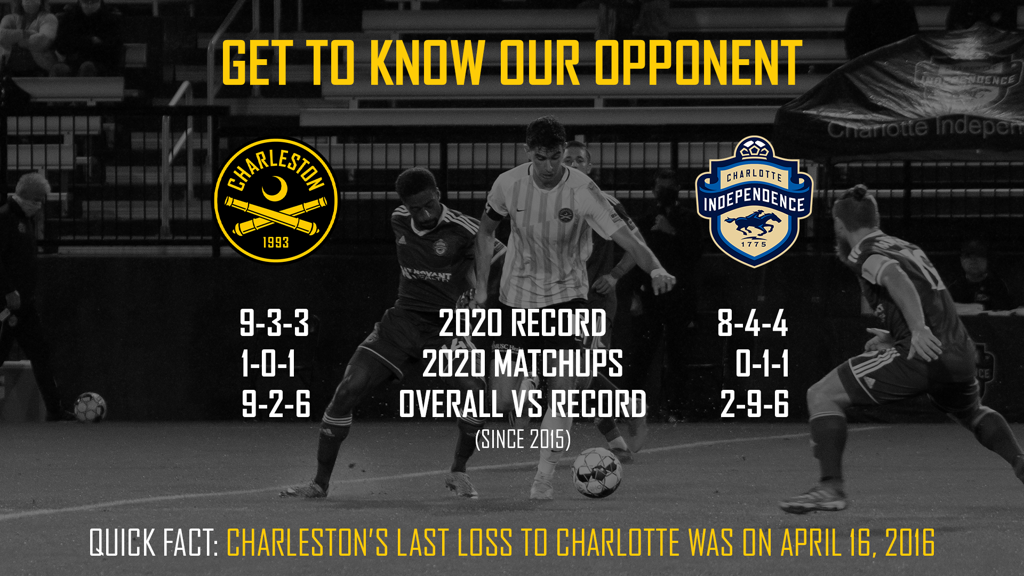 Charlotte Independence are the first opponent the Battery will face at home to kick off the 2021 season at Patriots Point. Being a longstanding rival of the Black and Yellow and the first opponent fans will get to see at the new stadium this season on May 14, the Jacks are first up in our new preseason series where we break down each Atlantic Division opponent, revisit recent history with the opposing club, and look ahead to the matchups set for the 2021 season.

The Battery saw Charlotte Independence twice last season, with both fixtures played at Charlotte’s 2020 home, the Sportsplex at Matthews.

The first match on August 19, 2020, was one of the Battery’s few matches played outside of their designated Group H division in the condensed season. The match, ending in a draw, was the second of Charleston’s nine-game unbeaten streak that lasted over a month last summer.

The second meeting between the two came during the postseason with the Battery visiting Charlotte again for the USL Championship Playoffs’ Eastern Conference Quarterfinals. The closely fought battle between the two carried a 1-1 score into extra time. The Battery persevered and came out on top after a well-placed free kick from Jarad van Schaik floated into the box to find forward Arthur Bosua who headed it past the keeper for the game-winner.

The Jacks compiled a strong 8-4-4 record en route to winning Group G during the 2020 regular season.

The two sides have met every year since the Independence’s inaugural season in 2015, the Battery lead the series with a 9-2-6 record. The last victory for Charlotte over the Battery came in a 3-2 result on April 16, 2016, in Charlotte. The Jacks visit the Battery’s new home at Patriots Point for the very first time while still looking for their first win on Charleston’s home turf in the modern USL era.

Among the things to watch for with Charlotte this year is how they replace their top scorer from last season, Dane Kelly. Kelly, who is the USL Championship’s all-time leading scorer, made a move to Israeli Premier League side Bnei Sakhnin this offseason. Fans can expect to see veteran midfielder Enzo Martinez in the mix to help fill the void left by Kelly on offense. The Battery, meanwhile, will look to maintain their strong record over the Independence with a roster retaining much of the core from last season.