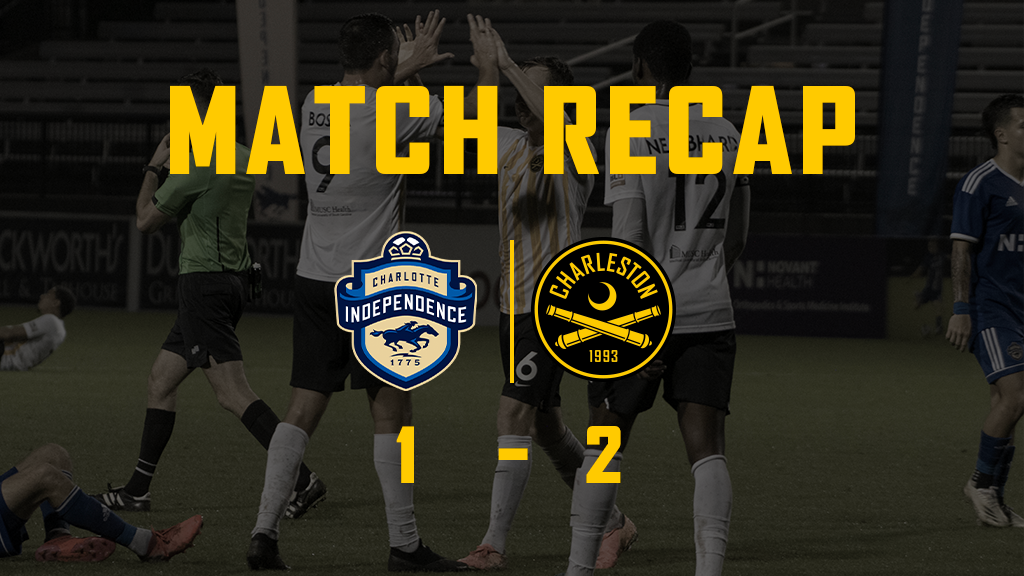 With goals on either end of 120 minutes of play, the Charleston Battery extended their season Saturday night in a 2-1 victory over the Charlotte Independence to open the USL Championship Playoffs. The win secures the Battery’s spot in the Eastern Conference Semifinals where they will face the Tampa Bay Rowdies for a fifth time this season.

It was a delayed start, but the Battery didn’t delay in finding the back of the net. In the third minute, a pass from just over the halfway line was punched up by Zeiko Lewis to Mauro Cichero. Cichero, getting bumped between two Charlotte defenders, was unable to get a shot off, but the ball bounced perfectly in front of Nicque Daley who rolled it past a diving Miller. Daley now leads the team in scoring alongside Zeiko Lewis with six goals apiece.

After the fast start, the Battery attack settled down as both teams exchanged threatening chances throughout the first half. In the 15th minute a shot by Independence midfielder Rey Ortiz from the right side of the penalty area deflected off the right post. Stavros Zarokostas, coming off his first professional brace one week ago, nearly put the Battery ahead in the 23rd minute. Taking away a defensive pass back at the top of the box, Zarokostas pushed the ball forward and took a shot that was deflected wide by Miller. The Independence had another opportunity late in the first half as Luke Haakenson took a pass from Enzo Martinez to the top of the box, dribbled past two Battery defenders and put a shot towards the right corner that was blocked by Kuzminsky and cleared away by AJ Paterson. Kuzminsky protected the Battery’s lead again just before the half as a free kick in the 41st minute was put on goal from 40 yards out by Jake Areman and the Battery netminder deflected it wide.

While Charlotte threatened fifteen minutes into the second half with a shot by Ortiz 25 yards out that went just past the left post, they found their equalizer at the 64th minute. Jake Areman floated a free kick to the box into a crowd of players that nearly bounced in. Kuzminsky swatted the ball, but it couldn’t clear through and Hugh Roberts was there to put the rebound into the back of the net.

As both teams fought the rain and fatigue, Mauro Cichero had two opportunities in the 90th minute that nearly decided the game in regulation. As the Battery charged forward, a cross at the top of the box by Zeiko Lewis found Cichero who sailed it towards the top left corner only to be denied by a reaching Miller. And just 30 seconds later, a corner set piece by Robbie Crawford found Cichero perfectly placed but he was unable to redirect the header, going just left of the net and sending the game into extra time.

Early into extra time, Charlotte forward Dane Kelly, who was kept quiet for most of the night by the Battery defense, found his second opportunity in the 100th minute with a shot from the top of the box. Kelly was unable to get power behind it and it was easily scooped up by Kuzminsky.

It was Coach Mike Anhaeuser’s reinforcements that would make the difference just a minute after Kelly’s shot. Arthur Bosua, who replaced Cichero early into extra time, was perfectly positioned in the penalty area to receive a crossing free kick floated by Jarad van Schaik from 50 yards out. Charlotte's keeper came out off the line to grab the ball on the fly, but Bosua was better positioned and directed the ball with his head over Miller and a collapsing Charlotte defense to go in the goal put the Battery ahead. “Jarad got his foot under it and I knew I had to attack it,” Bosua said of the play. “It was a pretty good height for me, but once I heard the goalie yell he was coming out to try and punch it, I knew there was nobody behind me. I tried to get as much as I could on it and flick it on to the goal. I was fortunate enough for it to go in.”

The Battery held on to the lead for the remaining nineteen minutes of extra time refusing Charlotte the equalizer even after two chances by Dane Kelly in the 103rd and 108th minutes as well as a volley by Christian Chaney in the 115th minute that went wide of the right post. The Independence pushed their keeper up in the closing minutes for a couple set pieces in an attempt to get as many bodies forward as possible, but the Battery stood firm and came out of Charlotte extending their season to the next round.

"The guys played great. We went up early and then the game was pretty open which you expect in the playoffs,” Head Coach Mike Anhaeuser said of the win. “They were pushing numbers forward the whole game. It was a very offensive game which is not always the standard for Charlotte vs. Charleston.”

The Battery now face a familiar rival in the Conference Semifinals after the Tampa Bay Rowdies won their first-round matchup against Birmingham. It will be the fifth time Charleston faces Tampa Bay this season. Looking ahead to the Conference Semifinals, Coach added, “We knew that if Tampa Bay won, we’d have to go back down there and get a result. We’re going to have to match what we’ve done in our last few games against them defensively and cause problems with our running and aggressiveness offensively. We know it’s going to be an absolute battle.”

The Battery now turn their attention to Saturday’s Conference Semifinal as they’ll travel back down to St. Petersburg to face the Rowdies on Saturday, October 17, at 7:30 p.m. The game will air on ESPN+.