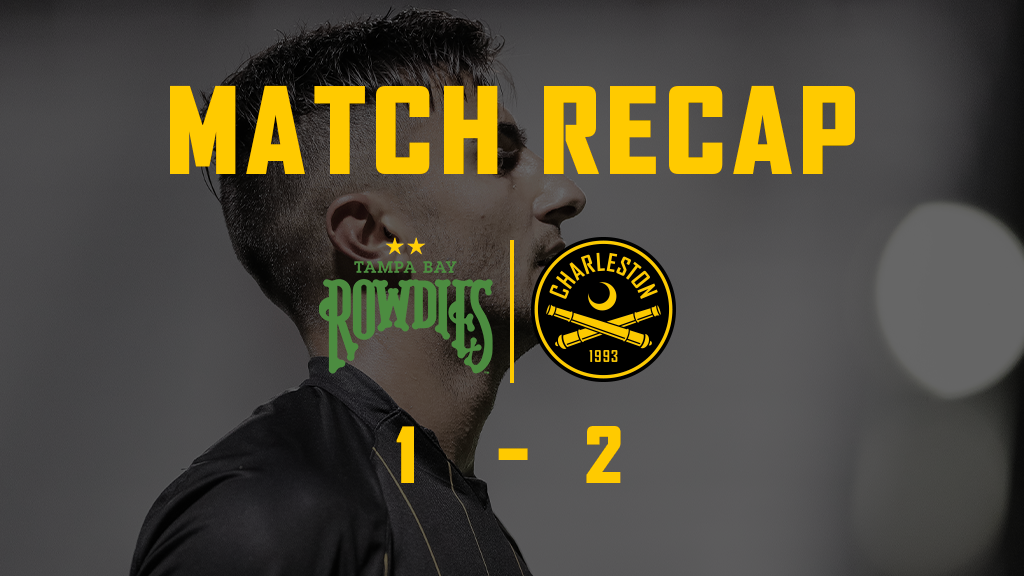 The Charleston Battery closed out their regular season with a victory over rival Tampa Bay Rowdies 2-1 Saturday night. Two second-half goals by Battery rookie Stavros Zarokostas was the difference as Charleston defeated Tampa Bay for the third time this season and look ahead to the start of the USL Championship Playoffs beginning next weekend.

The Battery defense regained form, albeit with a different makeup in Coach Mike Anhaeuser’s starting lineup with Leland Archer being joined by Deshawon Nembhard, Rennico Clarke and Kyle Nelson on the back line. Through the first 45 minutes, the Battery held the Rowdies to just one shot on goal. The first half remained quiet on the scoring front, but it was nonetheless a physical 45 minutes with 4 yellow cards issued, two apiece for each side.

The Battery, offensively, had a few chances through the first half, most notable being a beautiful pass up by Mauro Cichero to Stavros Zarokostas who crossed into a fray of Battery and Rowdies players, eventually being cleared by the defense for a corner kick. Zarokostas was just getting warmed up. The Rowdies equally had limited attacking chances in the first 45’ with forward Leo Fernandes making a dangerous cross in front of the goal in the 29th minute only to be kicked out of play by Nembhard. And in the 35th minute, the Rowdies were awarded a free kick in dangerous territory, but Rennico Clarke found good positioning to deliver the clear to the sidelines.

All in all, it was a gridlocked first half as neither team looked willing to concede territory and allow the other to break through.

Coming back on even at 0-0, the Battery had a close chance after a cross by Nembhard hit the crossbar in the 49th minute. The Rowdies charged back just minutes later but were stopped with a near angle save by Battery keeper Phil Breno. The Battery started to set up camp in the Rowdies half by the 55th minute and broke the deadlock in the 57th. A long clearing pass by Mauro Cichero again found Stavros Zarokostas 10 yards outside the Rowdies box. Zarokostas dribbled into the penalty area and, with a quick fake past a lone Rowdies defender, punched it through to the bottom right corner of the net. It was a near mirror to Stavros’ goal over the Rowdies back on August 29.

On registering his first brace as a professional soccer player, Stavros said, “It’s definitely a moment I’ll never forget in my life. It feels good to do something like that, especially when it’s such a big game. It’s not just a brace, it’s also a huge result for the team so there are definitely a lot of emotions I’m feeling right now.”

Looking at his first goal, he added, “Great move by Mauro. It was very similar to the first goal I scored against Tampa Bay at home, against the same player even. I pretended I was going to go outside, then cut inside and tried to put a shot on target. It happened to go in the perfect spot.”

Tampa Bay responded five minutes later when, in the 62nd minute, former Battery defender Forrest Lasso fielded a header off the corner kick past Breno and into the net. After the Rowdies equalizer, both teams went back into a deadlock for over 20 minutes until Zarokostas came forward again with the ball in the 84th. Charging up the right side, Stavros crossed it forward to midfielder Temi Adesodun in the top of the box. Temi, with his first return to the pitch in weeks, immediately dished it back to an advancing Zarokostas who launched it from the top of the box and into the net. It marked the first brace of Stavros’ professional career and just enough for the Battery to close things out for the evening. The team held through as a defensive unit for the remainder, including five-plus minutes of stoppage time, to seal the win and close out the regular season.

“Fantastic result, the guys are feeling great. The excitement of getting a win going into the playoffs and beating a good team - it’s always enjoyable,” Coach said on the win. Looking ahead to the playoffs he added, “If you get the other result, you have to grind mentally. What we did is we went back to defending as a team and got back to what we did well. Of course two great goals by Stavros, it’s what you need heading into the playoffs. Our rotation up front are scoring and we’re ending on a good vibe. Now we have to get ourselves ready and refocus for the playoffs.”

The Battery travel back home and get ready for the first round of the USL Championship Playoffs. Based on Saturday night’s results across the league, the Battery will likely face Charlotte Independence in the Conference Quarterfinals next weekend. It will be the second time the regional rivals face off this season after drawing 1-1 on August 8.