Battery Fall to Miami FC in Second Half Struggles 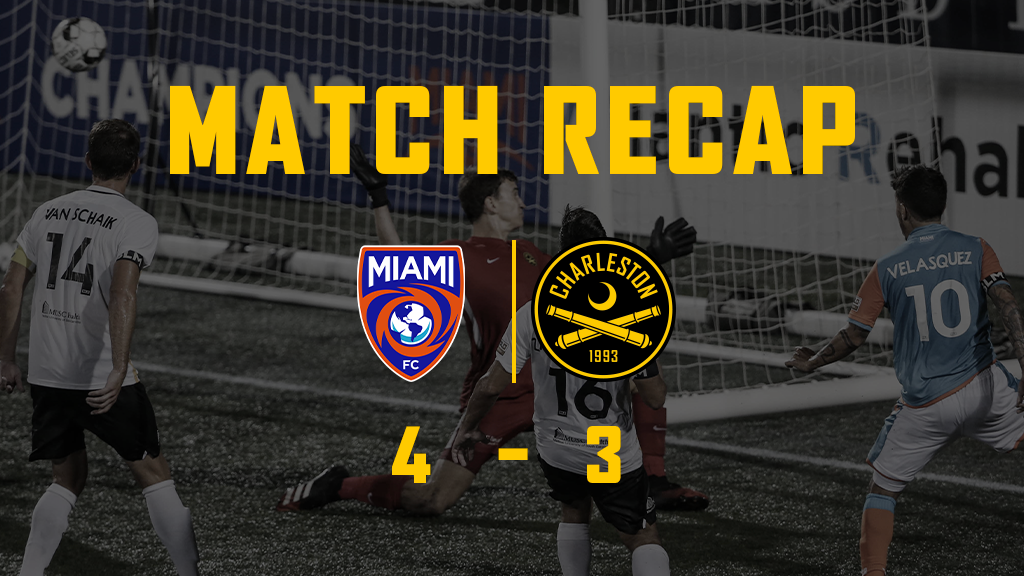 Things didn’t go Charleston’s way Wednesday night at Riccardo Silva Stadium as the Battery fell to The Miami FC 4-3 after a second-half push by the hosting side. After putting up a solid performance through the first half, Charleston’s defense was exposed early and often through the closing 45’ allowing Miami to come out on top.

It was first half dominance for the Battery on Wednesday night as the Black and Yellow put up a relentless attack through the first 30 minutes. As the Miami line played high, the Battery exposed the Miami back line early culminating in a deflected shot by Stavros Zarokostas to be knocked in by Daley in the 12th minute. It was the second chance for Daley on the evening and he didn’t let up with a missed conversion just four minutes later that was saved by Miami keeper Mark Pais. While Miami gave the Battery back line some trouble in the 23rd minute as Charleston failed to clear their line through multiple attempts, Nicque came through with his brace after a breakaway banger from the top of the box. “I just saw the opportunity and took it,” Daley noted on his second goal for the evening. While Miami started looking tired towards the end of the first half, both teams entered the locker room at the break with plans to adjust and come out strong for the final 45’.

“We came out strong, we surprised them a little bit more than a couple of times. Could have had more than two. It was a really good half, we moved the ball and made chances on the left and the right," Battery Head Coach Mike Anhaeuser noted.

It was all Miami in the second half, though, as the Battery continued to get pinned in their own half and the back line started getting stretched by the Miami attack. The home team got great movement from forward Romario Williams in the 48th minute to deliver the Miami side’s first shot and an easy tap in for the goal. Down by one, Miami wouldn’t let up through the remaining time, even after Robbie Crawford added some padding just a minute later with his first goal of the season. Miami made adjustments and substitutions throughout the half to respond to the Battery’s second-half game plan and turned the match on its head with 9 total shots on target to put the Battery on their heels. While Charleston keeper Joe Kuzminsky made an aggressive effort, making 5 solid saves throughout, Miami were able to convert three more times in the second half. Goals by Vincent Bezecourt at 60’, Sebastian Velasquez at 64’, and Miquel Gonzalez putting it home at 88’ with a ball just going over the line before the Battery defense could clear was the difference.

“We came out flat and pushed up a little too quickly,” Anhaeuser said on the second half performance. “They caught us on the counter attack for a simple goal. But we didn’t learn our lesson going up 3-1 and made it an open game.”

Coming out of the tough loss and looking ahead to Tampa Bay, Coach added “You got to take the positives from a game. And how we played in the first half was great. We’re going to have to reproduce that. Tampa Bay is going to come out flying, they’re going to be aggressive and want to win the game being at home. We’re not going to lay down. We know what we have to do against Tampa Bay. We have to defend well and not make it an open game, especially on the road. We’re going to be ready to defend as a unit and as a team.”

The Battery remain in Florida as they take a quick trip up to St. Petersburg to close out the regular season against the Tampa Bay Rowdies before looking ahead to the playoffs.