Battery Enter Final Week of Regular Season on the Road 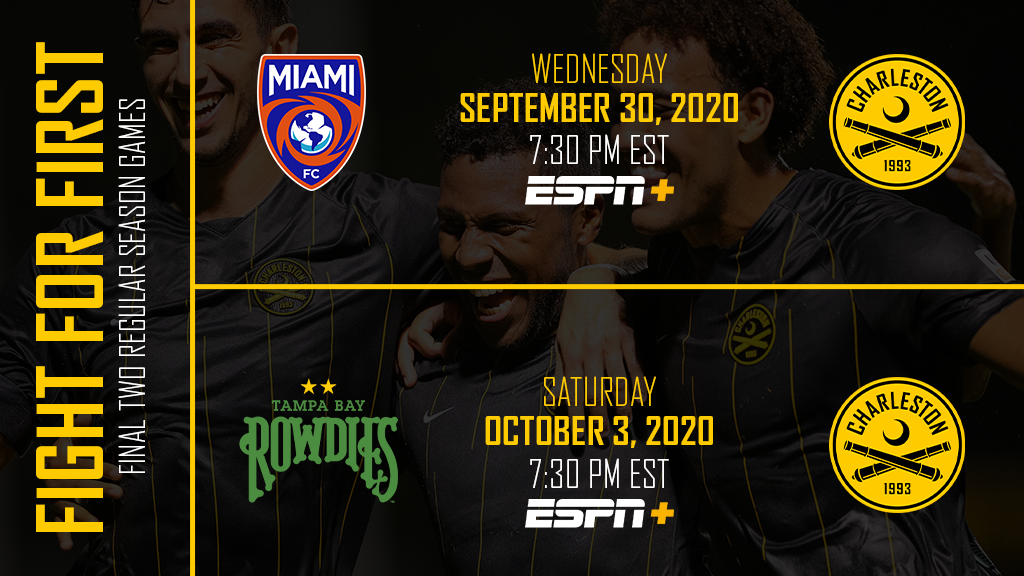 It all comes down to this. Thirteen games so far. That's 1,170+ minutes played. Six clean sheets. And twenty-one goals scored by nine different players. Now, just two matches remain as the Battery fight for first place and the 2020 Championship Playoffs sit on the horizon.

Welcome to the final week of the 2020 regular season!

The boys depart this week and head to the Sunshine State for the final two-game stretch. The Battery take one last look at The Miami FC on Wednesday before closing out the regular season against the Tampa Bay Rowdies at Al Lang Stadium in St. Petersburg. Taking 3 points against an eliminated Miami side would be welcome news for the Black and Yellow as they shift their focus towards the regular-season finale on Saturday.

One could say it’s been a tough inaugural USL Championship season for Miami. Head Coach Paul Dalglish probably expected a different result for his mostly veteran squad, but their presence was nonetheless felt in Group H with Miami working draws against both the Battery and Rowdies this season. Elimination or not, they have two games remaining on the season, both at home, and will look to further impact Group H by trying to spoil the Battery’s unbeaten streak on Wednesday.

The Battery will face an adaptable Miami roster that’s deviated between 3 and 4 defenders on the back line, sending 4 midfielders up the last two times they faced Charleston. Wednesday’s match will be just the second for the Battery this season played on artificial turf. In the draw on September 5 at Riccardo Silva Stadium, Charleston had some trouble early retaining possession due to the playing surface, but they’ll look to adapt this Wednesday and come out stronger in the first half. Keep an eye out for more to come as we break down the keys to winning in Miami in our Match Preview later this week.

Fifty-nine days have passed (as of posting) since the Black and Yellow last visited St. Petersburg where the Rowdies bested the Battery 2-0. Since that loss nearly two months ago, the Battery have gone unbeaten, amassing 21 points in 6 wins and 3 draws through the months of August and September.

Tampa Bay will enter Saturday’s final game on a full-week’s rest while sitting atop both Group H and the Eastern Conference. The Rowdies are one of a pair of USL teams with only 2 losses through 15 games. And we don’t have to note who handed the Rowdies both of those losses this season. With the series currently favoring Charleston 2-1, the Battery will look to keep that series lead and sustain momentum into the playoffs.

For now, there’s business to take care of in South Beach on Wednesday night. But it’s going to be a wild week, no matter how you look at it. So buckle up and be sure to follow along here at CharlestonBattery.com, on the Battery App (download here!) and on social!

And don't forget to sign up for our Match Preview newsletter so you're up to date on key storylines leading up to the matches!
Sign up here.