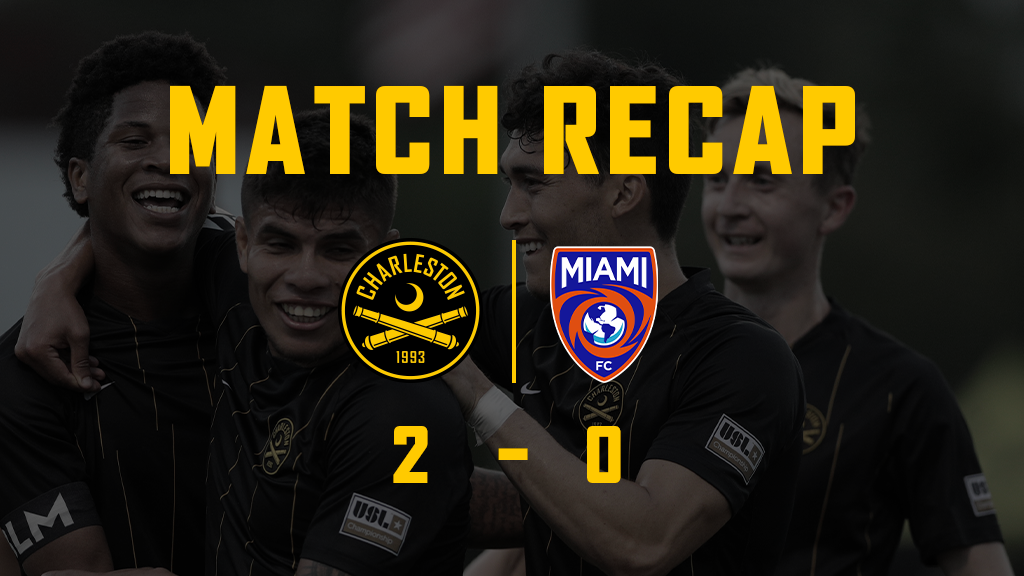 The Battery punched their ticket to the postseason for a thirteenth consecutive season after a 2-0 victory over Miami FC Sunday night at Patriots Point. While brushing off a shaky start against a Miami side fighting to avoid elimination, the Battery took full control of their home pitch by the 20th minute, completing a sixth shutout win for the season and a berth to the USL Championship Playoffs.

Coming off of, arguably, the Battery's strongest first-half performance against Tampa Bay on September 11, the Black and Yellow may have put the pressure on themselves in trying to replicate that start as it was a shaky start in the opening minutes. With three offsides flags in first 16 minutes, the Battery opened up opportunities for the Miami attack to put pressure on early. But the Charleston unit quickly changed course as they turned the early pressure into strong defense to quickly launch the counter attack.

That game plan came to fruition in the 18th minute as the team pushed forward and Battery defender Leland Archer floated a ball from just inside the Miami zone to Zeiko Lewis pushing forward on a route up the middle. Lewis settled the ball with one touch before chipping the finish into the top-right corner of the net past a charging Mark Pais, the Miami keeper.

“The guys were moving the ball well and we put them under pressure and that’s what we were trying to do. I’ll tell you, that first goal really made the difference,” Coach Mike Anhaeuser noted.

Miami responded almost immediately as Vincent Bezecourt fired a shot from the penalty area that bounced off a teammate. Bezecourt fielded his own rebound with a header that went just wide right. And as it looked like both teams were settling in for a back and forth battle, the Battery broke through again a minute before halftime as Nicque Daley intercepted an attempted defensive pass back to the keeper. Miami keeper Mark Pais got a hand on Daley’s initial chip shot before the Battery forward took a narrow angle shot off the rebound to put the Battery up by two.

Facing elimination, Miami had an early opportunity in the second half as Tomas Granitto fired a heater over the crossbar. And Prince Saydee, subbing in for Miguel Gonzalez, the only player to have scored on Joe Kuzminsky this season, took a shot a tough angle only to be deflected by the Charleston keeper . But for much of the remaining 45’ it was the Battery limiting Miami’s chances with the back pushing the ball forward for the midfield to contain in the attacking end.

On the thirteenth year in a row making the postseason, Coach joked, “It’s a lucky number, huh?” Further adding, “Thirteen years in a row, it’s an incredible accomplishment. But this is about this team. The team’s playing well and we’re not done yet. We’re shooting for that top spot. We want to come out next week in our last home game here and hopefully have a playoff game at home. We want to keep it rolling. I’m proud of the guys for doing it, at the beginning of the season there were people thinking we wouldn’t finish in that top two.”

Sitting three points behind Tampa Bay in Group H, the Battery return to the pitch Saturday, September 26th for the final home game of the regular season in an out-of-group match against Loudoun United FC before hitting the road for their final two against Miami FC and Tampa Bay. With wins in the next two matches, the final match of the season on October 3rd against Tampa Bay Rowdies could prove to be the deciding factor for first place in Group H.