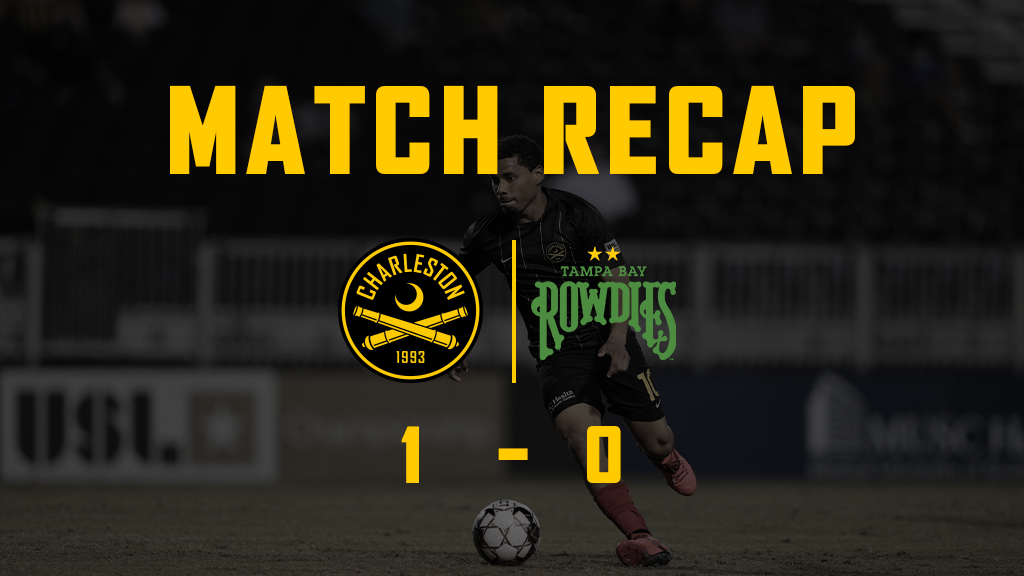 With one of their best first half performances of the season and another Zeiko Lewis goal, the Battery secured 3 points in a 1-0 victory against the Tampa Bay Rowdies on Friday night at Patriots Point. It marks the second time Tampa Bay has lost this season, both in Charleston.

The Battery started strong finding opportune positions and creating several chances. Knocking several times through the first 15 minutes, they were unable to put anything through. But Charleston was clearly in control through the first 45' with clean passes, multiple crosses close to target and several near breakaways.

Charleston applied pressure early and often on the Tampa Bay back unit which was only compounded as the Battery were awarded several set pieces. Six first half corners gave Charleston the flexibility to test Tampa Bay's defense, including one that converted only to be called back. In the 32nd minute, Robbie Crawford switch it up from the corner launching it out to Zeiko Lewis centered 20 yards out. The shot by Lewis was deflected into by an offside AJ Paterson and taken away. It was a generous 10 corners by the end of the night which, a tad higher than the 0 corners last week against Miami.

Considering the successful first half start, Coach Mike Anhaeuser noted, "You're at home. I think a lot of it was Tampa Bay sat back, looked like they were going to play for 0-0 at the half. We did a great job moving the ball, using our strength on the outside of the field with AJ, Logan, Zeiko and Nico. We really pushed the ball on them [defenders] Jarad and Leland  really kept moving the ball and shifted it. It was a really good first half, just unfortunate we couldn’t get that end product.”

Tampa Bay came out for the second half looking refreshed and catching the Battery sluggish few opening minutes. The Rowdies had a chance in the 53rd minute with a free kick 20 yards out, but forward Leo Fernandes sailed it clear over the crossbar and into the supporters section.

It was just minutes later that Charleston struck. Charging downfield the ball was pushed up to Mauro Cichero 40 yards out. Cichero pushed a brilliant pass splitting through two defenders and finding Zeiko Lewis. With the clear gap in the back line and a stutter step shaking the defense, Zeiko grounded one through and past keeper Evan Louro. The remaining 35 minutes saw the Battery limiting any rebutting chances by the Rowdies and after 4 minutes of stoppage time, Charleston secured 3 points.

The Black and Yellow did not disappoint the roughly 250 fans attending in the first match open to the public. Charleston put up 16 shots against Tampa Bay’s 3 (0 on target) and shutout out the highest scoring team in Group H for the second time in a row.

“They’re tough to break down because they’re a good defensive team. But we really created a lot of chances and I think we played well,” Coach added, looking at the team's performance against a 2-loss Rowdies squad.

The Battery’s unbeaten streak continues at 8 straight, dating back to July 31. The two wins against Tampa Bay during the current streak are also the only two losses for the Rowdies this season, having gone undefeated until losing to Charleston on August 29. The Battery have not beaten Tampa Bay twice in a season since 2017.

Charleston catch a longer than usual break and return Sunday, September 20, hosting The Miami FC for their third of four meetings in Group H play.