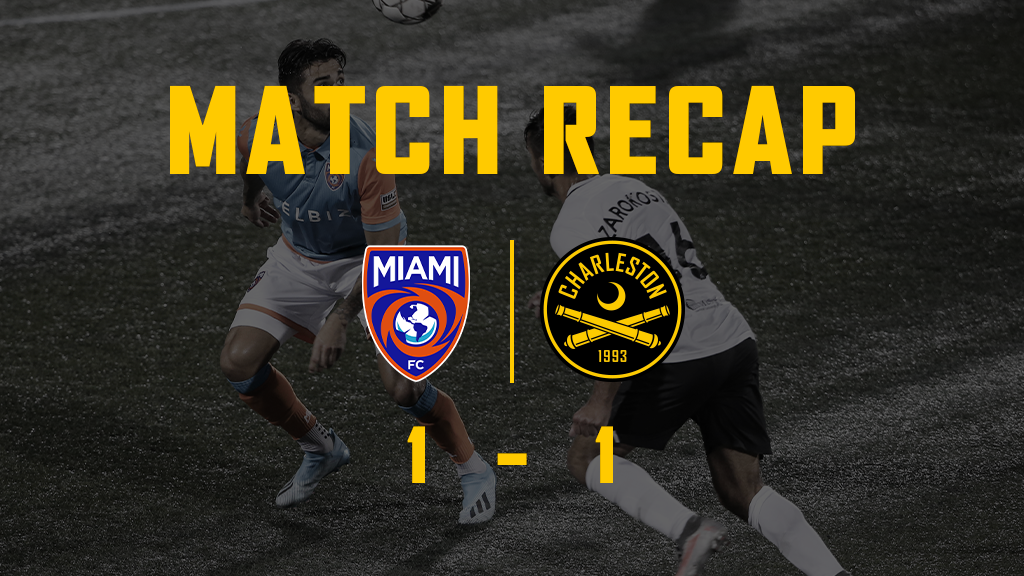 Through a hard-fought 90 minutes, the Charleston Battery secured another point in a 1-1 draw with The Miami FC Saturday night. It marked the seventh consecutive match without a loss for the Battery. While Charleston were looking for 3 points with a win in their second bout against the Miami side, a late deflecting goal in the 85th minute by Miami meant Charleston would have to settle for the draw.

Whether it was the south Florida heat or Miami’s home-field advantage on artificial turf, the Battery were under pressure early as the Miami side got out to a good start on at home. The hosts nearly took the lead early when, in the 19th minute, a low cross from Janos Loebe got past the Battery back line and punched in by forward, and former Battery attacker, Romario Williams. Charleston got lucky as Loebe was flagged offsides just before making his cross and the goal was called back.

The Battery defense put up a formidable performance through the first 45 minutes, but a relentless Miami attack continued to threaten in the box. And the Battery kept Miami off the board in the first half with stellar play by Joe Kuzminsky between the posts. The Charleston keeper made a key block and recovery just a minute after the called-back goal off a blazing shot from the top of the box by Miami’s Sebastian Velasquez. And with 10 minutes to go in the half, he made a key stop coming out to block a ball at Williams’ feet to prevent the shot. “He was under pressure but got the punches and managed the crosses,” Coach Mike Anhaeuser assessed of Kuzminsky’s performance. “Obviously he did very well controlling things in the back, but give them credit for really getting the ball in the box and putting us under pressure.”

Without many chances created by the Battery through the first half, they readjusted and came out strong for the second. Two minutes into the half, Charleston created their most threatening attack of the night point as Logan Gdula played up and passed it from deep on the right side to Zeiko Lewis who, being jammed up by two Miami defenders, dished it to Angelo Kelly. Avoiding a tackle, Kelly relayed to Stavros Zarokostas who, from 30 yards out, rocketed a curling shot to the top shelf just out of reach of Miami keeper Mark Pais. It marks Stavros' third goal for the season and his second off the bench after subbing in early for Romario Piggot who went down with an injury in the 15th minute.  “We knew we had to attack. We had to get the ball and get it live,” Coach commented on the second half. “They put us under pressure and we were able to break it down and get past that pressure with a couple counter attacks. I think it was more the guys getting used to the surface and I thought they did a great job adjusting and coming out in the second half to make it more of a game and not just defending for 90 minutes.”

Down one, the Miami squad nearly equalized 10 minutes later after a shot by Velasquez from the top of the penalty area deflected off the right post to a rebounding Williams near the goal line who kicked it up, off the crossbar, rebounding to Vincent Bezecourt whose last ditch effort went over the goal.

The Battery nearly added some padding in the 67th minute after a free kick by Robbie Crawford from the right side connected with AJ Paterson for a beautiful header that unfortunately found the cross bar and bounced over the goal. Not letting up, Miami earned an equalizer in the final five minutes as Mo Thiaw crossed up center to Tomas Granitto who took a shot that was redirected into the net by Miguel Gonzalez, never giving Kuzminsky a chance to make the save.

With the single point from the draw, the Battery continued to lock in their hold on playoff contention and now sit 3 points behind first-place Tampa Bay Rowdies. The boys will be watching Tampa Bay’s Sunday night matchup against Philadelphia Union II and prepare to face their Group H rivals back home on Friday, September 11, at Patriots Point.