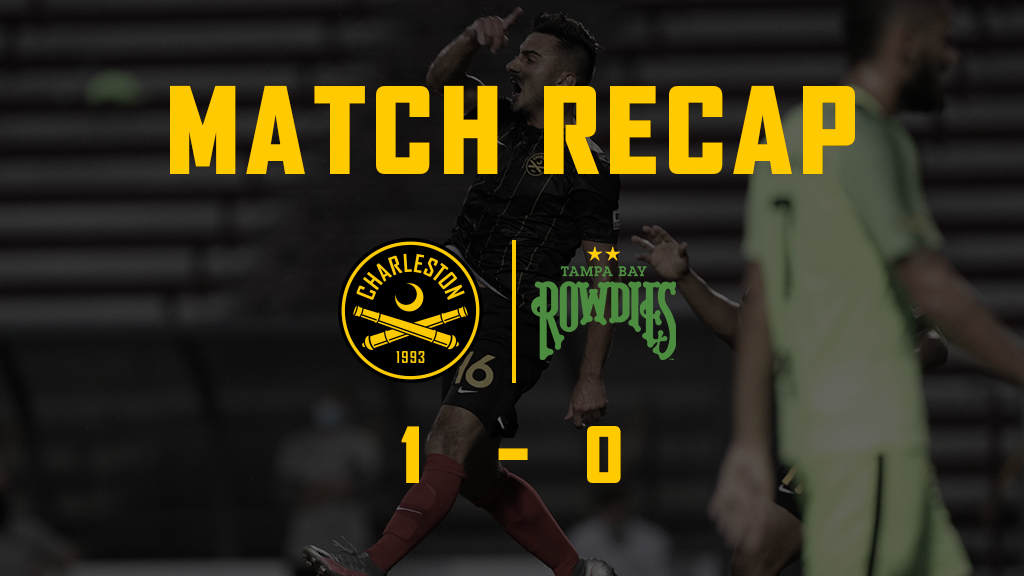 After three straight matches of aggressive attack, it was the defensive unit's time to shine as the Battery defeated Tampa Bay Rowdies 1-0 Saturday night. Charleston became the first team to defeat Tampa Bay this season after a first-half goal by Stavros Zarokostas that proved the difference for the Battery's fourth win in a row to go undefeated for the month of August.

Following the opening minutes, both teams stopped play in the 7th to come together at the center circle as a demonstration, joining the wider movement in sports to bring attention to the fight against social injustice and promote equality, diversity and inclusivity.

Through the first half, the Battery looked like an entirely different team than Tampa Bay saw at Al Lang Stadium on July 31, the last time the two teams met. The Black and Yellow nearly took the lead in the 17th when Angelo Kelly cut inside and sent a low shot just wide of the left post. Kelly struck again five minutes later as he floated it from midfield ahead of the Tampa Bay defense to Stavros Zarokostas who, after a quick cut, powered a curling shot to the right corner of the net and ricocheted off the post into the net for his second goal on the season.

Minutes before halftime, Stavros nearly struck again, creating an opportunity after his blocked shot found Kelly redirecting the rebound back to forward Zeiko Lewis who took another shot just wide of the left post. Settling for Zarokostas' lone goal, the Battery entered the intermission resolved to defend the lead.

Tampa Bay came out strong in the second half with early pressure off a corner that a screened Battery keeper Joe Kuzminsky was able to save off a header from Tampa Bay's Juan Tejada. And the Rowdies found an open middle, making multiple crosses back and forth in the 54th minute, but the Tampa Bay captain Sebastian Guenzatti shot off the cross to the left-outside of Kuzminsky's net.

As the minutes waned in the second half, the Rowdies continued to apply pressure seeking the equalizer including a strike from Yann Ekra from 25 yards out that sailed over the crossbar. After Zarokostas stepped out in the 88th with a muscle cramp, the Battery looked to hold the lead bringing in Kyle Nelson as a fifth defender into five minutes of stoppage time. The reinforced backline found every opportunity to cleanly clear the ball down to the Rowdies side and eat up the clock and bring Tampa Bay's undefeated streak to an end.

Now just one point behind Tampa Bay at the top of Group H, the Battery hit the road next week to take on Miami FC on September 5th before returning to Patriots Point for a third bout against the Tampa Bay side.