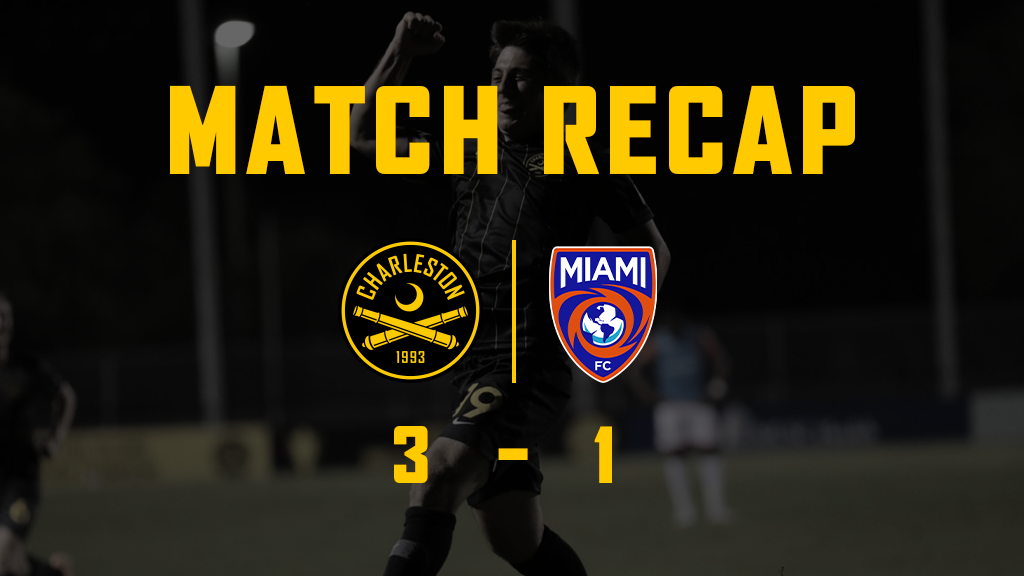 The Charleston Battery changed their tune Saturday night at Patriots Point Soccer Complex putting up a first half fight like none other this season in 3-1 victory over The Miami FC Wednesday night. The victory secured 3 important points as the Batter set their sights on first place in Group H. A victory Saturday against Tampa Bay would pull the Battery within 1 point of the group leader.

For the third game in a row, the Battery put up 3 goals in 90 minutes. This marks the first time in the USL Championship era that any Battery squad has put up 9 goals across 3 games. The scoring has been spread across the roster with Wednesday’s goals coming from 3 different player, and the 9 goals coming from 7 different Battery players.

For the first time in their new stadium at Patriots Point, the Battery welcomed fans for the match with approximately 150 season ticket holders in attendance. “It feels really good to be home and have some support from our family and friends. It feels really different and makes you work harder,” midfield and Wednesday’s Man of the Match Romario Piggot noted.

The Battery shook off what was becoming a common theme with slow starts out of the gate for the first 45’ and did not need to rely on a strong second half to make up for it. This time around, Charleston came on strong with 11 shots in the first half and commanding 58% of the possession for the first 45’. With 2 goals before the intermission, the Battery exhibited the passing accuracy, control and physicality Coach Mike Anhaeuser expected when he crafted his roster for the season.

With fans finally back in the stands, the Battery put on a first half performance well worth the wait for supporters. They got things going early when, in the 7th minute, Zeiko Lewis placed a beautiful cross on the other side of Miami keeper Bryant Gammiero, but a sliding Mauro Cichero just missed the ball that otherwise would have been punched in. Romario Piggot had his first of four shots in the 26th minute with a powerful shot to the right corner, but a beautiful diving save by Gammiero meant Piggot would have to wait his turn. Just minutes later, the scoring started. Off a Robbie Crawford corner kick that was headed off by a Miami defender, AJ Paterson took a shot from the top of the box that was deflected at the feet of the Miami defense, but bounced to Logan Gdula who rocketed it just over the left corner of Gammiero for his first goal of the season. Six minutes later, an attacking Angelo Kelly attempted to pass up to forward Arthur Bosua, but deflected off the back of a Miami defender right to Piggot. Dribbling around the Miami defense in the box, Piggot found a clearing and kicked it low through a fray of players on both sides screening Gammiero and rolled in just out of reach of the diving Gammiero. The Battery hit the locker room at intermission with the lead for just the second time this season.

On the teams first half performance, Coach Mike Anhaeuser noted, “We wanted to come out, it’s something we talked about and we came out great. We really kept them under pressure. They were trying to pressure us, we worked it out very well. And we were able to get 2 goals, might have been able to get 3 there.”

The Miami started putting pressure on the Battery early in the second half, looking to make up ground. Successive shots in the 49th and 50th minutes by Miami forward (and former Battery favorite) Romario Williams that required spectacular saves by Battery netminder Joe Kuzminsky. Minutes later Miami recovered in their zone after push by the Battery and charged down the field in the 53rd minute. Crossing from the left outside the box, the ball found Miami forward Miguel Gonzalez just past AJ Paterson who hit the ground and past Kuzminsky for Miami’s lone goal. With new substitution rules in the shortened season, Coach Mike Anhaeuser brought on the reinforcements. As veteran forward Dante Marini subbed in for Mauro, he found the back of the net off a deflection in the 63rd minute complete with his signature ‘windmill’ celebration. One last, beautiful save by Kuzminsky at 79’ and the Battery were close to home. Through an uncommon 7 minutes of stoppage time, Miami made a last ditch effort putting pressure on Charleston through stoppage time without a result.

In his overall assessment, Coach said, “You gotta take one game at a time. I wasn’t worried about Tampa Bay, we play them on Saturday. We needed to take care of tonight. We’ve got some guys that can step in and do the job. Great performance tonight. Now we’ve got to dig deep, recover and get ready for Tampa Bay on Saturday.”

With fans returning to matches, Coach added, “The fans were unbelievable. It wasn’t that many, but you heard them. You heard them on the end. You heard him when we scored and you heard them with the referee. It just adds that little bit of atmosphere. It might have only been a few, but it felt like a lot more than there was.”

The Battery quickly regroup to take on a historic rival in Tampa Bay Rowdies while beginning to look at the possibility of taking the top spot in Group H.