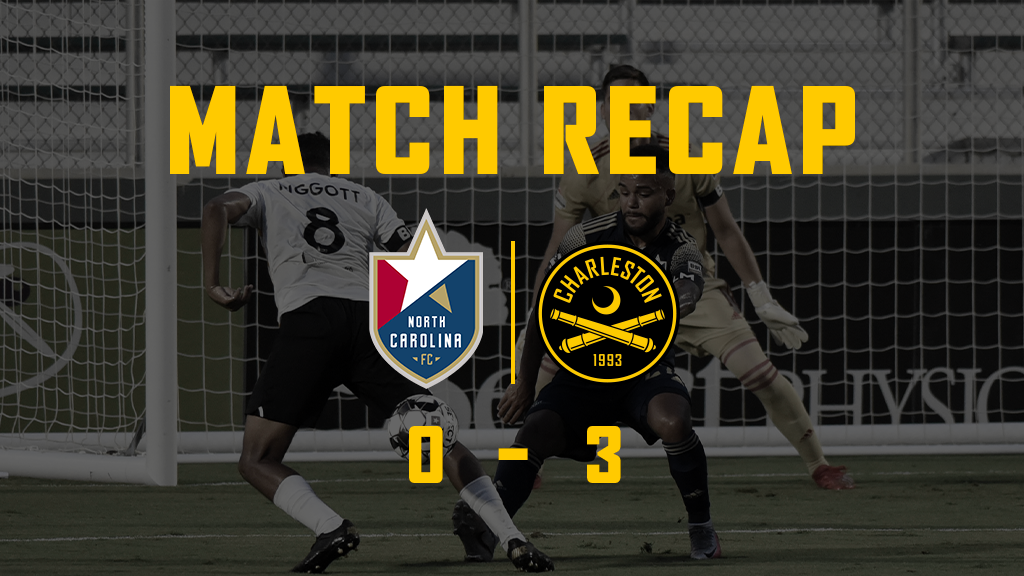 Charleston Battery sustained their scoring momentum Wednesday night with a 3-0 shutout over North Carolina FC to capture their third consecutive Southern Derby cup and add more padding in their own Group H standings.

The win against NCFC gives Charleston 3 points in the standings and, for bragging rights, their third consecutive Southern Derby cup.

Defensive veteran Jarad van Schaik made his 150th regular-season appearance tonight for the Battery, one of just 4 players in the USL Championship to achieve that feat. In his historic start, Jarad had a solid performance with 2 tackles, 1 interception and 2 key blocks for the evening.

Romario Piggot, the team leader in shots, finally found the back of the net for his first goal on the year in the 52nd minute. That goal was assisted by Zeiko Lewis whose attack up front continues to be a constant threat and creates opportunities for his teammates.

The Battery came out off the starting whistle looking to make trouble up front, but found themselves pretty evenly matched by a North Carolina side that came prepared for the Charleston attack. With a steady back and forth, the Battery created some opportunities early including a shot at 20’ by Zeiko Lewis and quick rebuttal at 21’ by AJ Paterson, but both found the fray of NCFC defenders and got deflected off.

A recurring theme, but the Battery found solid footing into the second half as they took full control of the hardware-worthy match. In the 56th minute, Lewis set up Piggot for the first score on the evening. That was quickly follow by an amazing series of passes of a corner kick from Robbie Crawford that saw Leland Archer clear it from the fray to Crawford, making a clean pass to Paterson who headed it to a charging Nicque Daley to punch it in for his first score on the year. Not done yet, Stavros Zarokostas subbed in late and finalized the evening with a clean shot past the Carolina keeper.

On winning the Southern Derby cup, Coach Mike Anhaeuser noted, “Anytime you have an opportunity to win a cup, you have to take that chance and take the bull by the horns to get the W. I’ll tell you, the guys stepped up and did a fantastic job, beat a very good team tonight. And we’re taking back the Southern Derby cup and keeping it for one more year.”

The Battery return home with the hardware and have a week before facing The Miami FC at home next Wednesday for the first of four matches as part of the Group H battles.