Battery Come from Behind to Defeat Atlanta United 2 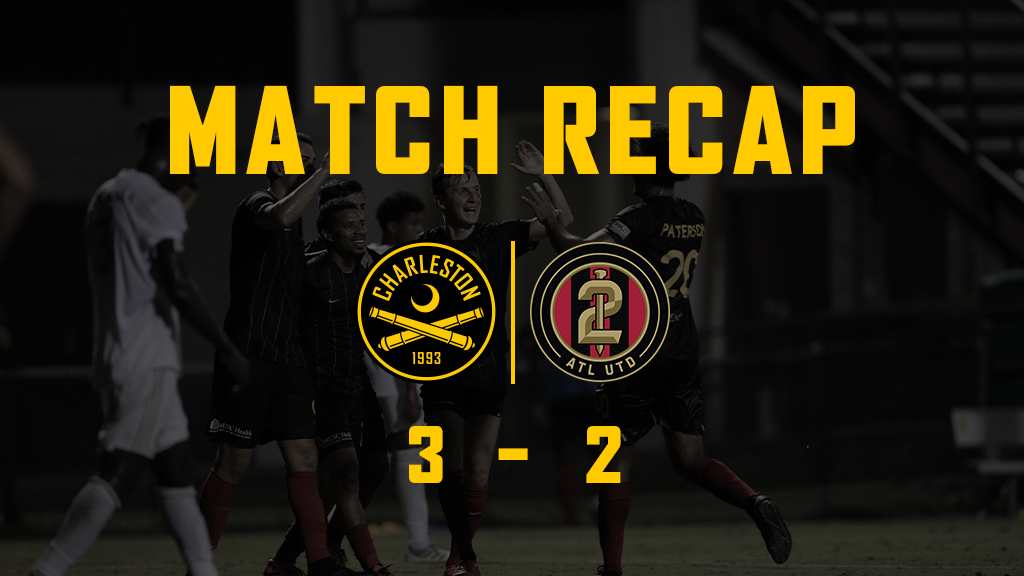 It yet another second-half comeback, the Charleston Battery knocked off Atlanta United 2 on Saturday night 3-2 in their first game back at Patriots Point in 23 days. While some early defensive mistakes by the Charleston side put Atlanta up by 2, the Battery kept in the fight for a full 90 minutes with goals in the 57th, 59th and 91st minutes. The 3 points from the win place Charleston firmly in second place for Group H and in playoff contention.

Fighting till the end has become a common theme for this Charleston team of late. Saturday was the third game in a row that the Battery had to come from behind. After two road draws last week, they finally sealed the deal with the victory back at home against Atlanta.

Zeiko Lewis continued his team-leading (4) scoring campaign with registering the brace for the evening. His equalizing goal in the 59th minute turned the tables as the Battery held a steady attack and wore down the young Atlanta team through the second half.

Mauro Cichero continued to find his footing with two goals in two matches against Atlanta. The 2020 signing showed his versatility as Coach moved him further forward in the box for the second half with promising results notching the first goal for the Black and Yellow on Saturday and helping shift the momentum to Charleston's favor. He has now scored in both his first and second professional starts for his career.

The Battery had their work cut out for them early in the first half as Atlanta’s constant forward threat, Macky Diop, continued to menace the Battery backline. A pass across the top of the box to Diop through a fray of Battery defenders was punched low to the right side of the goal past Battery netminder Phil Breno. However, the Battery showed their continuing development as a singular unit, controlling the ball for more minutes than any previous half played thus far (58% possession) and showing flashes of attacking brilliance as Romario Piggot knocked one in, but was unfortunately called back due to an offsides violation. As in previous matches, some key defensive lapses were taken advantage of by the Atlanta side. Coach Mike Anhaeuser stressed making big plays off of the corner kick this time around, but the Battery only had 4 first-half corners that all failed to convert. The boys headed to the locker room at the half down 1-0.

Much like the first half, the start of the second did not go the Battery's way as Atlanta converted a corner kick in the 51st minute to go ahead by 2. Breno had a brilliant block but couldn’t get it out of a packed box as Atlanta’s Efrain Morales knocked it in on the rebound. The tides began to shift minutes later as both Cichero scored and Lewis equalized, within two minutes of each other. Mauro made the most of a pass up the middle by Romario Piggot, switching feet past a solo Atlanta defender, and curved one past Atlanta keeper Ben Lungaard.  Not to be outdone, two minutes later Zeiko fielded a midfield pass from Angelo Kelly to make a quick settle and spin to then tuck it past Lundgaard to the back of the net. A header off the corner kick by sub Arthur Bosua at 89' nearly sealed the deal as Lundgaard came out from the net, but hit the outside of the net. Then, it was all Cichero and Lewis in stoppage time for the go ahead goal with a little help from the defenders. After a throw in from defender Kyle Nelson, Cichero sailed it from midfield over two Atlanta defenders to a perfectly placed AJ Paterson who settled it with the chest and then knocked it over to Lewis on the right side to tap it in just past Lundgaard with. “I made my run, Mauro crossed it and I just had to make sure I put it on target from AJ's pass” Lewis commented.

Looking back on the comeback win, Coach Mike Anahaeuser noted, “We really put ourselves in a hole. But we had the time, we knew if we had enough chances, the wind was with us. It shows what this group does. We made some adjustments and tried to get on them and press a little bit. Almost went with 2 forwards and the first one Mauro got really turned the tides. You could see them getting tired, put [Atlanta] under pressure and looks like the game really caught up with them. To comeback from 2 down at home, we just need to make sure we start better next game because we came out a little flat.”

Thinking about how the team has come together so far, he added, “Up front you’re starting to see a couple guys with their combination play working and have confidence to do that. That caused two of our goals tonight. If we can do that earlier and more often, we’re going to be very potent.”

The Battery travel to face North Carolina FC on Wednesday. With the padding in Group H provided by Saturday's win, the Battery have a dual focus for Wednesday's match: continue adding points to the standings as well as bring back a Southern Derby trophy with Wednesday's matchup being a one-and-done iteration of the annual rivalry.