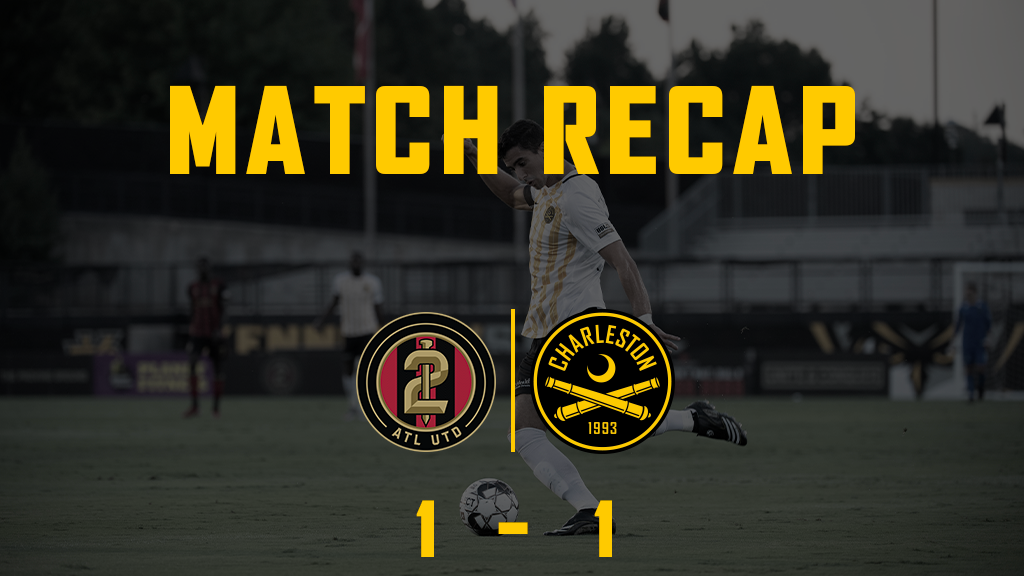 The Charleston Battery earned one point in a draw against Atlanta United 2 Wednesday evening at Fifth Third Bank Stadium. Late in the game, when it looked like the Battery were facing their second loss in a row, deep in stoppage time time Mauro Cichero provided the equalizing punch the Battery needed to ti it up and end with 1 point on the board.

The draw means that Charleston keeps its hold on second place in the Group H standings, sitting two points ahead of Atlanta.

After settling in the first 15 minutes, the Battery looked to take control and Cichero had his first big chance of the evening in the 24th minute after a free kick from the right side came his way in the penalty area, but he fired just over the crossbar.

The control Charleston had been showing early on in the first half began to shift as Atlanta started pressuring the Battery back line through the end of the first 45’. A shot in the 42nd minute by Atlanta’s Baboucarr Njie from 25 yards out sailed just high and a curling left-footed shot two minutes later by Phillip Goodrum didn’t break enough and went inches wide.

The hosting side took the lead in 22 minutes into the second half as Goodrum passed over the Battery defenders to a charging Amadou Macky Diop and shot across from the right side of the box into the left corner past an outstretched Breno. “Second half, we started taking control, but had a defensive breakdown with the giveaway and got caught there,” Coach Mike Anhaeuser noted on Atlanta’s first goal against the Battery this season.

The Battery tried to create opportunities with occasional difficulty through the backend of second half as shots by Romario Piggot and Angelo Kelly both sailed over. The sense of urgency picked up at the close, with 4 minutes of stoppage time added, the Battery stretched the field in the closing seconds. A throw in from Jay Bolt met Angelo Kelly who raced up the field and then dished it to Robbie Crawford at the top left corner. Crawford then crossed it to a crowded penalty area, but a battling Nicque Daley was able to head it over to an open Cichero whose powerful shot off the bounce sailed past the Atlanta netminder for the equalizer.

“A team that battles and were able to overcome going down, you could have folded up the table and go home with no points,” Coach added on the result. “They hung in there and utilized every minute, every second of that game really. Mauro got a great goal after Nicque Daley just battled with the center back and it popped to him. It takes a lot of nerve and calmness to finish it off at that point in the game. It’s been a tough two road trips, I’m just very proud of the guys for keeping their head above their shoulders and digging deep to get that draw because that’s like a win in the end.”

The Battery have a quick turnaround as they head north on Saturday to take on Charlotte Independence.

AJ Patterson and Rennico Clarke made their first starts since the resumption of the season. Stavros Zarokostas made his second professional start and first full 90’. This was Mauro Cichero’s first start of the season and first professional goal. Robbie Crawford was named captain for his first time with the Battery.