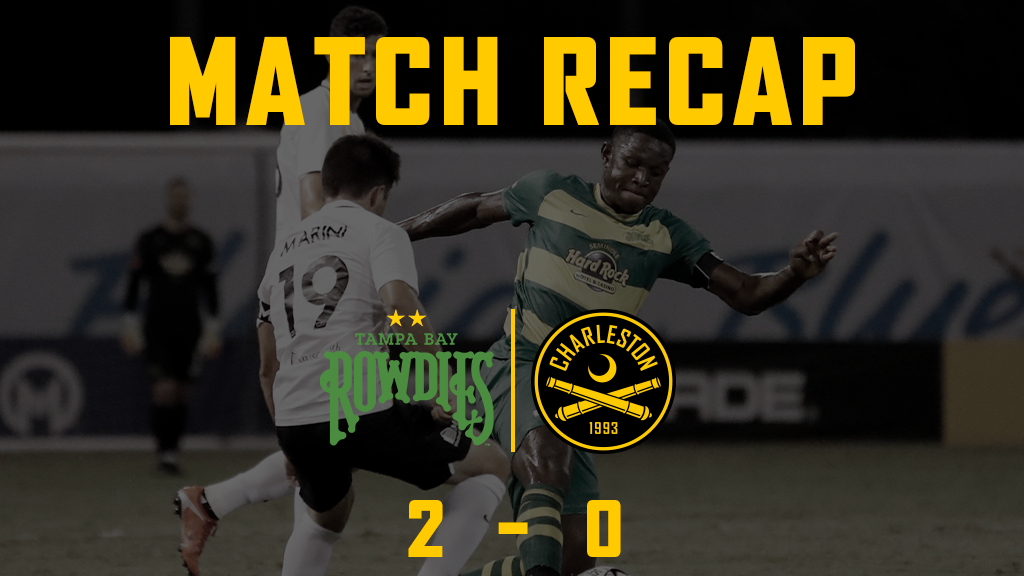 The Charleston Battery fell to Tampa Bay Rowdies Friday night, 2-0, in a back and forth that saw the Rowdies come out on top. The match went unopposed several minutes before both teams found a sense of rhythm culminating with Rowdies defender, and former Battery veteran, Forrest Lasso finding Lewis Hamilton in the pocket to fire in from 25 yards out and the Battery keeper, Phil Breno, comfortably deflecting.

While the Black and Yellow backline put up a formidable fight, the Rowdies connected on a long pass in the 40th minute as captain Sebastian Guenzatti settled the pass and chipped a shot that deflected in.

Within minutes, the Battery shook off the score and saw solid attacking by Stavros Zarokostas, in his first professional start. In that first opportunity, Stavros connected on the header but was unable to push it through.

The Battery got close again late after a deep cross from Dante Marini was headed to Jay Bolt and then Romario Piggot, but the trio failed to finalize the deal. Bolt’s header to Piggot led to a beautiful bicycle kick,  but left Piggot empty for the third time in three games after his headers over the past three matches that met the cross bar.

“It’s really our first road game after the break. We sat a little too far back, not our intent. But the team you’re playing is pretty good also. We just seemed to allow them to have the space in our half a little,” Coach Mike Anhaeuser noted.

The Battery backline saw some trouble late as defensemen Jarad van Schaick logged a red card on his second yellow for the evening, making him unavailable for next week.

Throughout, the Rowdies continued to cause trouble for the Battery into the second half, culminating with a crowded, contentious score by Battery defender Jay Bolt. The call back sealed the deal for the evening and led to Tampa Bay’s 3 points over the Battery and primacy in the Group H standings.

Charleston looks to bounce back with a Wednesday night matchup on the road against Atlanta United 2. This will be the third of four matches between Charleston and their Georgian rival.