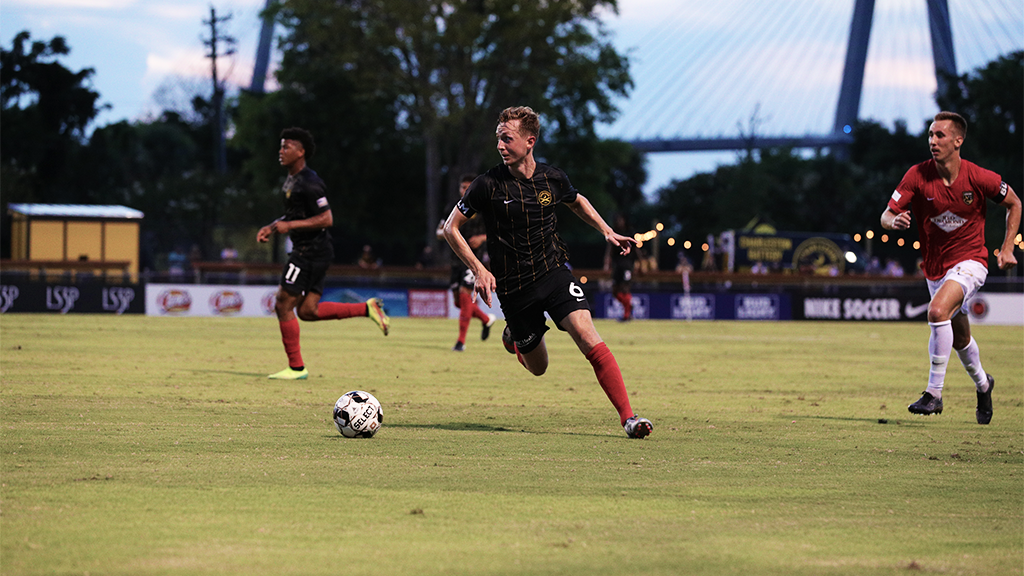 Through a closely matched battle Sunday night, Charleston Battery fell to Birmingham Legion FC 2-1 in their return to the 2020 Season. It was the first match in 133 days for the Battery and the debut of the new stadium at Patriot’s Point.

Despite a nearly-even split in possession throughout the game, Birmingham got on the board early when Legion’s Jonny Dean snuck one on the outside of Battery defender Deshawon Nembhard to an open Brian Wright who followed through with a right-footed shot across the shoulder of keeper Phil Breno.

But Deshawon didn’t let the misstep derail him as he went on the attack and, in some flawless passing around defenders combined with Robbie Crawford and Angelo Kelly, sent a cross to the top of the box for Zeiko Lewis to send into the net on the fly. With the score, Lewis solely owns the Battery’s 2 goals on the season.

As both teams came out equal to start the second half, Legion rookie Bruno Lapa notched his third goal on the season in the 54th minute as Jonny Dean, for the second time in the night, set up the score.

The Battery continued to make the most of the chances they created, but in several cases, the post had other ideas. Midfielder Romario Piggot fielded two beautiful headers straight towards Legion keeper Matt Vanoekel, but unfortunately did not see the back of the net.

Charleston closed out the night with nine shots, six from the box, but only two on target and both blocked.

“The big thing is, first game, you’re going to have some rust,” noted head coach Mike Anhaeuser. “But the good thing is, we did create. We came back, kept our heads up, got the goal to get back in it. And then went down and should have had one or two there off the post.”

The Battery will dust this one off and get ready for next week as they host Atlanta United 2 Friday, July 24 in a rematch of the season’s opener.