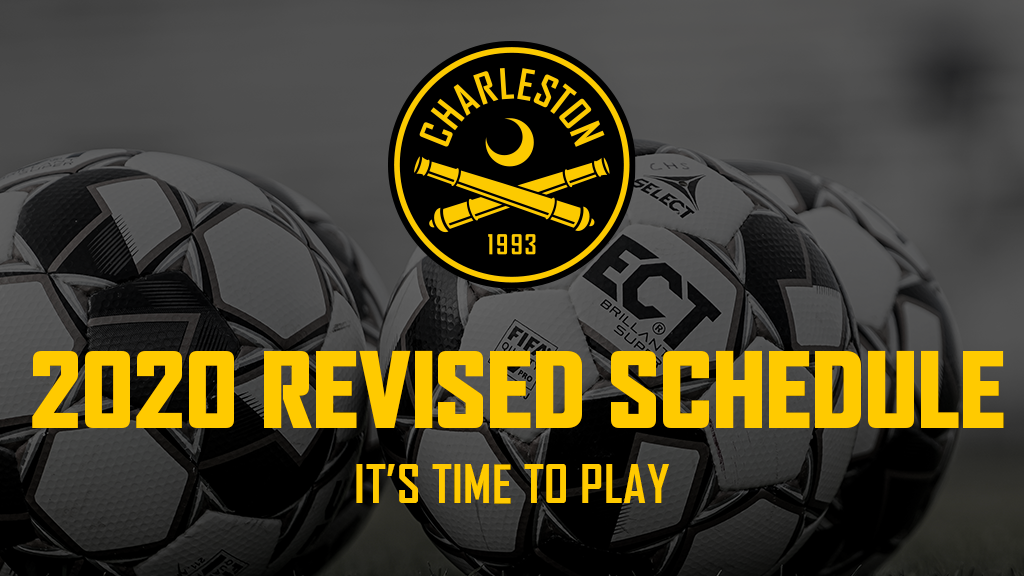 With the USL Championship announcing the revised schedule for continuing the 2020 Season, Charleston Battery returns to the pitch on July 19 as we face Birmingham Legion FC. See the updated schedule here. We can't thank you enough for your support through this crazy year.

Out of an abundance of caution, we have decided to play our first two games in July without fans in attendance. As the season unfolds, we will assess conditions and make the appropriate decision in collaboration with local authorities regarding opening doors for the remainder of the season. As excited as we are for our fans to experience our new home at Patriots Point, safety will remain our top priority.

If you have any questions or concerns about 2020 season tickets or single-match ticket purchases, please click here for more information or email us at tickets@charlestonbattery.com.

Three teams will face their season-opening contests in the first two weeks, with Pittsburgh Riverhounds SC’s season-opener on Sunday, July 12 on the road against Louisville City FC on ESPN2 being followed by Birmingham Legion FC’s 2020 debut on Wednesday, July 15 as it plays host to regional rival Memphis 901 FC at BBVA Field. Hartford Athletic will then be the final team to open its regular season as it plays host to Loudoun United FC on Monday, July 20 at Dillon Stadium.

Big divisional games will feature throughout July, with the opening game of the Kings’ Cup rivalry between Louisville City FC and Saint Louis FC commencing its four-game series on Saturday, July 18. The South Texas Derby will kick off a day prior, with Rio Grande Valley FC set to host San Antonio FC at H-E-B Park on Friday, July 17, while El Paso Locomotive FC will meet New Mexico United at Southwest University Park on Saturday, July 25.

Indy Eleven will then make its first trip to Lynn Family Stadium on August 8 as the rivals that contested the 2019 Eastern Conference Final square off in the first Louisville-Indianapolis Proximity Association Football Contest (LIPAFC). That meeting highlights a big slate of games that day, with New Mexico United and Phoenix Rising FC set to renew what became a fierce rivalry during the 2019 season on the same night in a fascinating intergroup contest at Isotopes Park.

The same night also sees games between Southern Derby rivals the Charlotte Independence and Charleston Battery at the Sportsplex at Matthews, a clash between OKC Energy FC and San Antonio FC at Taft Stadium, a rematch from the opening weekend of the regular season between Las Vegas Lights FC and San Diego Loyal SC at Cashman Field, and an intriguing intergroup matchup that sees Saint Louis FC host FC Tulsa at West Community Stadium.

August also includes other notable intergroup matchups. The Silver State Cup will return to Las Vegas Lights FC’s Cashman Field on August 1 as Reno 1868 FC visits for the lone regular-season meeting between the clubs this season, while Indy Eleven will play host to Pittsburgh Riverhounds SC at Lucas Oil Stadium on August 15. North Carolina FC will then play host to the Charleston Battery at WakeMed Soccer Park on August 19, and the month is capped off with a meeting between Reno 1868 FC and Phoenix Rising FC on August 29.

The race for the 2020 USL Championship Playoffs will heat up in September, with notable group games including a clash on Saturday, Sept. 5 between New Mexico United and El Paso Locomotive FC set for Isotopes Park. Other key potential games during the month including San Diego Loyal SC’s home contest with Orange County SC on September 13, and the visit of Hartford Athletic to face Pittsburgh Riverhounds SC on September 26. The Black Gold Derby could then be decided on September 30 as FC Tulsa plays host to OKC Energy FC at ONEOK Field, the second of two meetings between the clubs at that venue in the month.

The regular season concludes in the opening weekend of October and features high-profile group games that could decide playoff fates across multiple groups. The action opens on Friday night as Austin Bold FC plays host to San Antonio FC in Group D, and then continues with contests between Saint Louis FC and Indy Eleven at West Community Stadium in Group E, Memphis 901 FC and Birmingham Legion FC and AutoZone Park in Group G, and the Tampa Bay Rowdies and Charleston Battery at Al Lang Stadium in Group H. The final Sunday of the regular season also brings a rematch of the 2019 Western Conference Final as Real Monarchs SLC hosts El Paso Locomotive FC for a game that could prove key in Group C.

Every game of the 2020 USL Championship season will air on the ESPN family of networks, with broadcasts on ESPN2, ESPNews, ESPN Deportes and ESPN+ bringing all the excitement of the first league in the United State to return to play in home markets directly to homes across the United States.