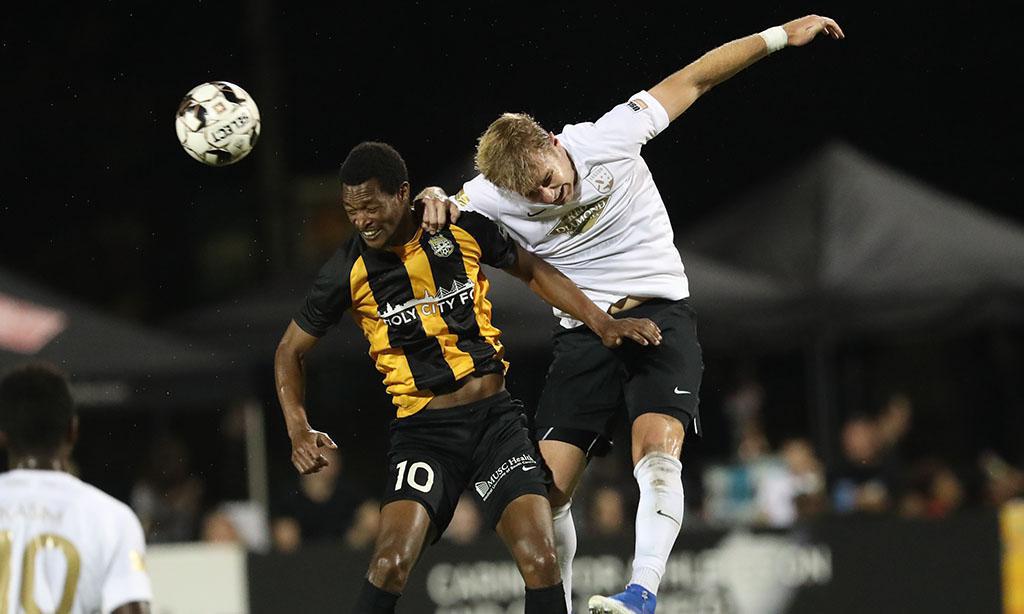 Charleston's playoff hopes are still alive as the Battery battled the Birmingham Legion to a 0-0 draw at BBVA Field on Saturday night. The two teams stay level on points (40) and closed the gap on Saint Louis after their loss to Louisville City earlier this evening. The match got off to an electric start with both teams gunning for an early goal in what's turning into an ever-intensifying playoff race.

Birmingham's Mikey Lopez, who scored against Charleston when the sides squared off at MUSC Health Stadium earlier in the year, produced the first big chance of the match. Lopez sent a blistering shot in from the right corner of the eighteen-yard box but Joe Kuzminsky was able to get his body behind and make the save.

It didn't take long for the Battery to respond with Ataulla Guerra and Zeiko Lewis Zeiko getting into dangerous positions inside the Legion penalty area. Both of Guerra's first-half attempts were blocked in quick succession while Lewis saw his only shot on goal saved by Matt van Oekel. It was a relatively quiet night for van Oekel who only needed to make one save.

Prosper Kasim led all players with three first-half shots including an open header following a corner that nearly gave the Legion a 1-0 lead. Kasim found himself wide open in the Battery penalty area following a cross and made great contact on the header, but the midfielder pushed his attempt over the crossbar.  Birmingham and Charleston combined for sixteen shots in the opening forty-five minutes with each team registering eight shot attempts.

Second half action was delayed for over an hour after inclement weather passed through the Birmingham area seconds before the start of the second forty-five minutes. The delay put a damper on what had been an exciting first half, as both teams looked to get back into their groove. Lopez registered the first shot of the half, ten minutes after play resumed.

The storyline of the second half was Guerra's red card after the forward picked up two yellow cards in a matter of six minutes. The match turned into a physical battle, producing a total of seven yellow cards. Charleston relied on their stout defense to keep Birmingham off the scoresheet for thirty minutes and did a wonderful job of blanking the Legion.

Kuzminsky picked up his 7th clean sheet of the season and was protected by a fantastic defensive backline, lead by captain Taylor Mueller. Six Battery players registered blocks on the night and forced the Legion into taking poor shots. Only four of Birmingham's nineteen shots found their way through to Kuzminsky.

The Black and Yellow return home for their final three matches of the regular season beginning with Loudoun United FC on October 13th at 2:00 PM. The Battery will host Memphis 901 FC on Wednesday, October 16th before taking on Bethlehem Steel on October 19th in the season finale. Tickets for all three games can be purchased online or by calling (843) 971-GOAL.