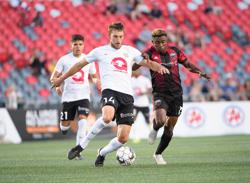 The Battery return home after a 3-2 defeat to Ottawa Fury FC on Wednesday night at TD Place Stadium.

Vincenzo Candela scored his first goal of the season to put the Battery ahead 1-0 in the 20th minute. Nico Rittmeyer picked up his first assist of the season,

Ottawa's Carl Haworth scored two goals on the night. His first off a free kick in the first half to tie things for Ottawa and his second in the second half to give Ottawa a 2-1 lead.

Zeiko Lewis scored his fifth goal of the season to level things in the 84th minute. A quick one-two with Angelo Kelly provided space for Lewis who snuck one in at the near post.

Mour Samb scored Ottawa's third of the night to clinch three points for the hosts. 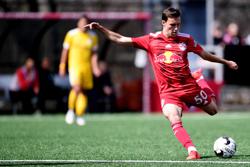 The Red Bulls last match against Nashville SC was canceled after 45 minutes and rescheduled to a later date, TDB.

The Pittsburgh Riverhounds ended the Red Bulls three-game winning streak on June 22nd in a 3-0 win. Nico Brett scored Pittsburgh's first goal of the match, chipping goalkeeper Rashid Nuhu from outside the box, in the 40th minute.

Steevan Dos Santos and Thomas Vancaeyezeele added goals in the 51st and 58th minute of play to give Pittsburgh a commanding 3-0 lead. Midfielder Jean-Christophe Koffie was sent off after picking up his second yellow card of the match in the 65th minute ending any chance of a Red Bulls comeback.

What to Watch For

A Rivalry in the Making - The Red Bulls have been a tough out for the Battery in recent years, eliminating Charleston from the first round of the USL Championship playoffs in 2017 and 2018.

The teams combined for 15 goals in two regular-season matches in 2018 highlighted by a controversial 4-4 draw at MUSC Health Stadium on August 25th.

Angelo Kelly and the Battery thought they found the game-winner in the 94th minute but the referee called a foul on Kelly prior to the midfielder's goal.

Lewis' Return - Zeiko Lewis came off the bench in his return from international play with Bermuda in the Gold Cup, replacing Vincenzo Candela in the 78th minute. Lewis combined with Angelo Kelly to score the game-tying goal beating Callum Irving at the near post.

Lewis, who was drafted by the New York Red Bulls in 2017, will face his former side since signing with the Battery prior to the start of the 2019 season. Lewis scored two goals in twenty-two appearances for NYRB II in 2017, making two substitute appearances against the Battery.

Lewis has been the best offensive weapon for the Battery this season, scoring five goals in nine starts, and should feature in what could be a high scoring affair.

On Preparations for NYRBII - We've only really had one day to prepare. We've played them so many times; but how they press, where they press, and the guys know it. But we have to be ready for it, and yeah the game might get chippy, and we may not be able to put, five, six passes together because of how they press. It may be one long ball over the top that gets us in.

On the Return of Ataulla Guerra - Its fantastic to have Ataulla back, but we have to be cautious because he's not there with his fitness. He'll have small minutes at the start and we'll build him up. We've got half a season left and he's an exciting player.