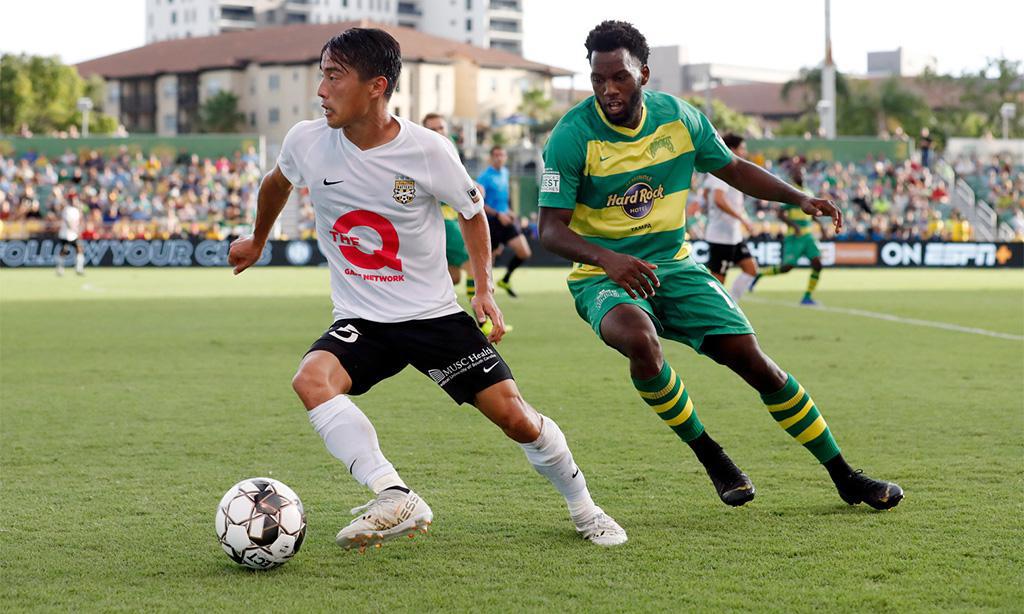 The Battery split points with the Tampa Bay Rowdies Saturday night at Al Lang Stadium. Ian Svantesson scored his fourth goal of the season to rescue a point for Charleston late in the match.

Both teams had numerous chances in the first half to open the scoring but neither side could capitalize on the opportunities. Nicque Daley showcased his quick feet and top end speed turning on defender Pape Diakite fifty-five seconds into the match. Daley picked up a pass just past the center circle, and with his back to Diakite, split the Rowdies defense top put himself through on goal. Daley would push his shot inches wide of the right post and out for a Rowdies goal kick.

Kotaro Higashi and Vincenzo Candela would put goalkeeper John McCarthy under pressure forcing back to back saves in the 16th minute. Higashi attacked the Rowdies down the left side making his way past Tarek Morad, firing a low shot at McCarthy who was able to make the initial save. McCarthy couldn’t control Higashi’s shot and the ball eventually found its way to Candela, who lined up a shot from outside the eighteen. Candela’s shot was straight back at McCarthy and the Rowdies were able to regroup.

The Rowdies had their fair share of chances in the first half, controlling a majority of possession and attacking play. Pape Diakite forced a save from goalkeeper Joe Kuzminsky in the 11th minute leading to a Rowdies corner, and later in the first half, Brandon Allen had an open look from six yards out, his header up and over the crossbar. Rowdies captain Sebastian Guenzatti scored his seventh goal of the season in the 39th minute to put Tampa Bay up 1-0. Midfielder Malik Johnson provided the assist on Guenzatti’s goal playing a one-touch pass into the forward who found a yard of space and powered a shot past Kuzminsky.

Ian Svantesson would replace Nicque Daley in the 82nd minute and scored the equalizing goal six minutes later, earning the Battery a late point on the road. The Battery and Jarad van Schaik earned a free kick in the 88th minute which would lead to Svantesson’s goal. Van Schaik’s ball from the subsequent free kick found the head of Arthur Bosua on the right side of the box, his attempt coming back across the middle. Svantesson raised his leg and directed Bosua’s header on target beating McCarthy at the far post. “Arthur had a mismatch and I just wanted to put myself in a good position,” said Svantesson after the game. “When I saw it come off his head, I got my leg up and made enough contact to score. It’s a good result for the team.”

The Battery return home on June 22nd to take on Swope Park Rangers at MUSC Health Stadium at 7:30 PM. Tickets are available and can be purchased here.