The Charleston Battery host the Pittsburgh Riverhounds this Saturday at 7:30 PM at MUSC Health Stadium. 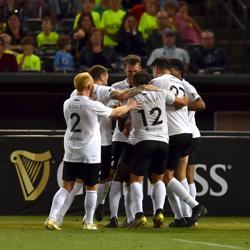 The Battery took three points last Saturday in a wild finish against Memphis 901 FC. Substitute Dante Marini scored the game-winning goal in the dying seconds of the match.

Defender Kyle Nelson provided the pass that would lead to Marini's goal. With everyone forward for a final attack, Nelson sent in a low, hard pass that skipped into the box and was mishandled by Memphis goalkeeper Jeff Caldwell. Marini beat Caldwell and a number of Memphis defenders to the ball to make it 1-0 in the 93rd minute.

"It felt great to be in a position to help the team win," said Nelson after the match. "The pass kind of bobbled on its way through the box and I knew he still had the keeper to beat."

Arthur Bosua and Zeiko Lewis will look to spearhead Charleston's attack with provided support from Jarad van Schaik, O'Brian Woodbine, and Dante Marini. Van Schaik notched a brace last time out at MUSC Health Stadium and Woodbine leads the team in assists. The Battery have scored at least two goals in three of their four home matches this season but face a difficult test Saturday night against Pittsburgh.

The late victory in Memphis makes it back to back wins for the Battery who will look to extend their winning streak to three matches tomorrow night at home. 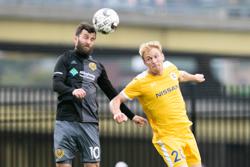 Pittsburgh saw late drama in their last home match against Nashville SC at Highmark Stadium on April 27th. Nashville goals from Kenneth Tribbett and Bradley Bourgeois put the visitor up 2-0 going into the final ten minutes of the match.

Christian Volesky cut the lead in the 88th minute, a diving header off a Jordan Dover cross, beating Nashville goalkeeper Connor Sparrow at the near post.

Pittsburgh would pressure Nashville late and force an unlucky own goal from Nashville defender Kosuke Kimura. Kevin Kerr provided the cross to Ryan James at the back post, his first touch deflected off of Kimura into the Nashville goal.

Midfielder Kevin Kerr will orchestrate the Pittsburgh attack with forward Neco Brett. Brett scored 15 goals for the club last season and has been held without a goal in Pittsburgh's last two matches. Brett and Kerr were on the scoresheet against Hartford Athletic on April 13th and both have two goals to their name this season.

Charleston and Pittsburgh were two of the best defensive teams in the Championship last season. The Battery have allowed three goals in four home matches this season with one shutout against Charlotte Independence earlier this year.

Pittsburgh are looking to improve on their defensive form after allowing six goals through their first three matches of the season. The Riverhounds have improved on their early-season struggles, shutting out defending USL Champions Louisville City, in a 1-0 win on April 6th and holding St. Louis FC scoreless on April 20th.

"They're probably one of the best defensive teams in the league," said Coach Anhaeuser after Friday's practice. "We may only get four or five chances and have to make one of them count. We've got to get balls into those wide positions where we can attack them."