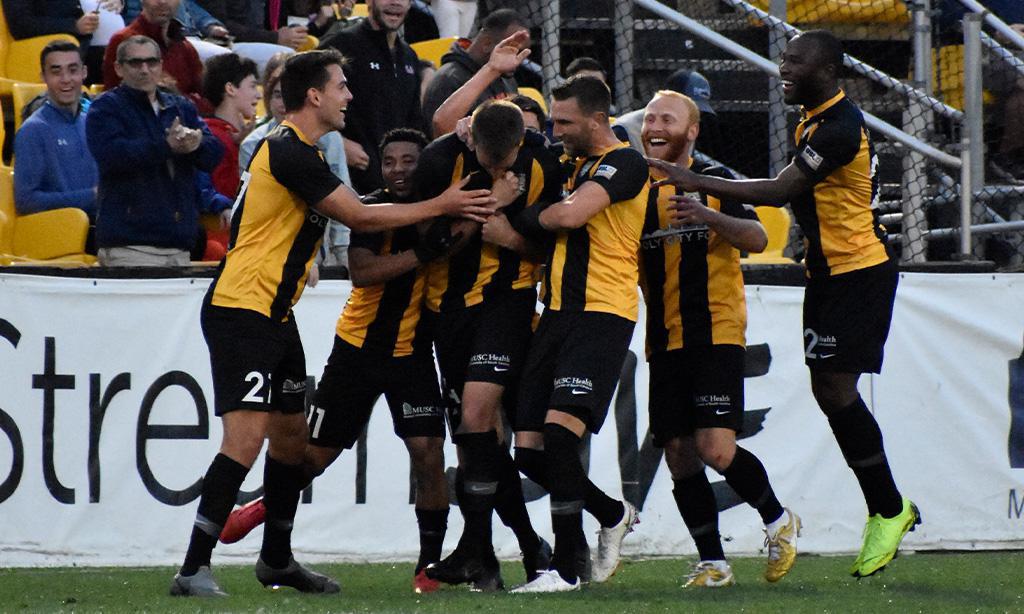 Jarad van Schaik opened the scoring fifteen minutes into the match with a beautiful goal, his first of the season. O’Brian Woodbine whipped in a cross from the right side looking for target man Arthur Bosua. The cross was behind the forward and bounced through the box to van Schaik who had a few yards of space to wind up for a shot. Van Schaik struck a sweet half volley that beat Matt Pickens high at the near post. “It feels good obviously, it’s been a while since I’ve scored,” said van Schaik. “The ball just kind of sat up and I tried to hit it hard and on frame.” Fourteen minutes later van Schaik would send in a cross that found Woodbine at the back post but the Jamaican defender couldn't finish.

Arthur Bosua made his first start for the Battery in place of the injured Ian Svantesson and took full advantage of the opportunity. He scored his first goal to double the Battery lead in the 64th minute. Kotaro Higashi provided the assist playing a brilliant pass to Bosua who made a strong run between the Nashville defenders and slotted home a shot from six yards out. “I’m so happy to get my first goal in front of an amazing crowd," said Bosua. "It was great vision from Kotaro and I’m glad I was able to finish it.”

Jarad van Schaik finished off the scoring for the Battery with a sublime free kick in the 73rd minute. A strong shot rattled the bottom side of the crossbar and bounced over the line before coming back out into play. Bosua would head home the rebound for good measure but the goal was ultimately awarded to van Schaik.

Nashville would score late through a Daniel Rios penalty, his fifth goal of the season. “You gotta commend our guys tonight,” said coach Anhaeuser after the match. “They are so dangerous in attack and we did a great job of containing them tonight.” The win puts the Battery in 6th place in the Eastern Conference standings and tied on points with rivals North Carolina FC.

The Battery are back on the road next week as they take on Memphis 901 FC at AutoZone Park on April 27th at 8:00 PM.